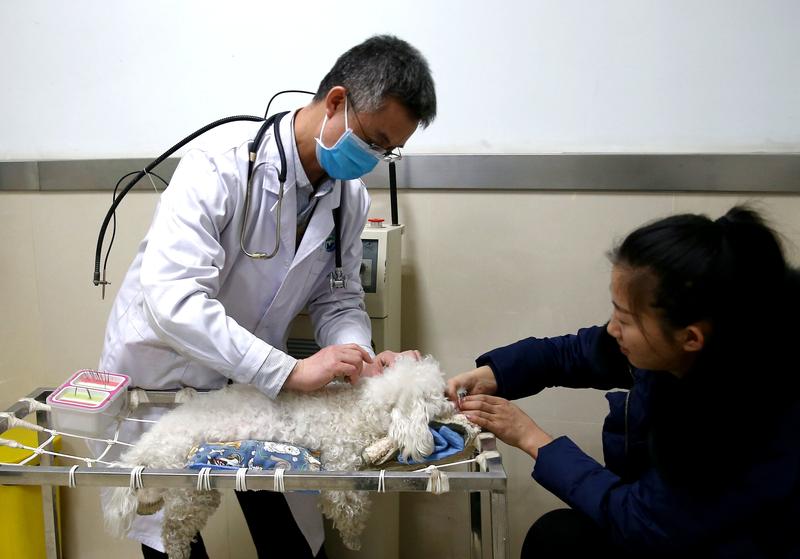 When three injections failed to make any improvement, a veterinarian in Shijiazhuang, capital of northern China's Hebei province, suggested surgery, but warned there was only a 50-50 chance of success.

Fearing Anbei was dying, Wang and her sister decided to drive over 300 kilometers to Beijing to give traditional Chinese veterinary medicine a try after learning online that it could be effective.

Before Anbei got sick, Wang had never thought dogs could benefit from TCM.

For neurological damage, including paralysis, and certain other diseases, traditional Chinese veterinary treatments involving acupuncture, herbal medicine and massage, have worked well when Western medicine has been ineffective.

Two weeks after first being seen by Pang, Anbei lay on her stomach for a fifth acupuncture session.

"It's amazing," Wang said with a sigh of relief, explaining that after the third acupuncture session, her dog was able to walk and run again.

In a 6-square-meter consulting room, with two diagrams of dogs' acupuncture points and four pictures of medicinal plants on the walls, Pang felt for the right acupuncture points around Anbei's neck and hind legs with the thumb and forefinger of his left hand. Finding the point he wanted, he lightly inserted the needle with his right hand, before quickly flipping the needle deeper with his index finger.

Pang said he has seen many dogs with spinal problems whose owners were despairing because Western medicine or surgery had no effect.

"Many dogs can't stand up, even after surgery, and end up having acupuncture here," Pang said.

He added that he had seen many of his patients get back on their paws after two or three acupuncture treatments and recover fully after 12, along with the use of herbal medicine and plasters.

He Jingrong, a senior vet who worked at the hospital before retirement, said that even with years of clinical experience, she was worried in 1999 when a "strict" dog owner asked her to only use acupuncture, and no drugs.

He, one of the first students majoring in traditional Chinese veterinary medicine to graduate from China Agricultural University, said she sweated nervously because she was not sure how effective the treatment would be.

Using just medicinal alcohol and acupuncture needles, she treated two 13-year-old Labrador guide dogs who were paralyzed after surgery on their knees. After three acupuncture sessions, the dogs could get up and walk slowly.

"With hindsight, I realized that this experience gave both me and acupuncture an opportunity to prove that we can really be effective," He said. 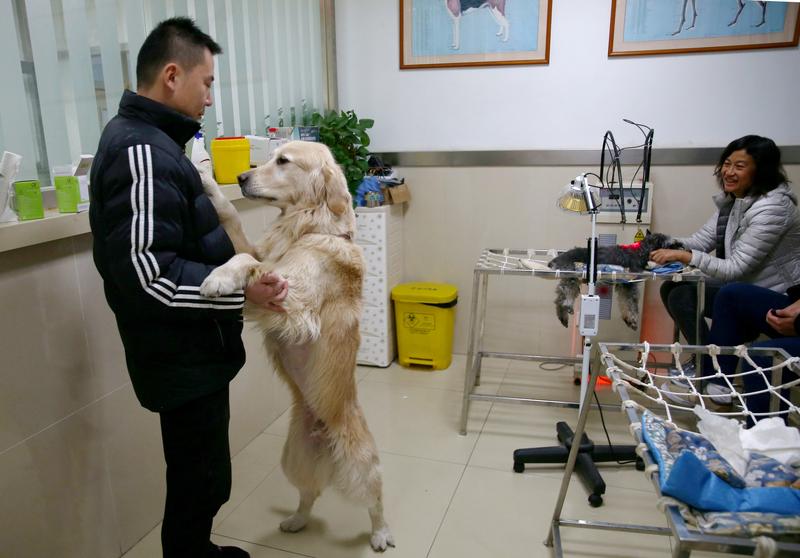 Owners of a 9-year-old golden retriever take their pet from Qingdao, Shandong province, to Beijing to seek treatment at the hospital. (ZOU HONG / CHINA DAILY)

Traditional Chinese veterinary medicine is even used at Beijing Zoo, where many animals are gifts from other countries and need special attention. Rather than surgery or drugs, He said that a red-crowned crane recovered well from rheumatoid arthritis after its long legs were buried in heated sand.

She said cats are too sensitive to be treated with acupuncture, so she created a massage especially for them that has proved effective in improving blood circulation. He's cat lived to the age of 24.

Traditional Chinese veterinary medicine has a history going back thousands of years. It originated in primitive Chinese society when people started domesticating animals. Veterinary education started as early as the Tang Dynasty (618-907), and the first veterinary hospital was built during the Song Dynasty (960-1279).

Traditional Chinese veterinary medicine uses similar approaches to health and treatment as TCM, including the use of meridians and pressure points, and both share the four methods of diagnosis: inspection; listening and smelling; inquiry; and pulse-taking. There are some differences, of course,－for example, animals can't answer questions.

A dog's pulse is taken at the femoral artery in their hind legs, and the dosage of medication for an animal the size of a horse is a dozen times greater than that for a person, as it is based on the animal's weight.

"Traditional Chinese medicine for people and traditional Chinese medicine for animals enjoy a long history of learning from each other," He said, adding that many drugs are tested on cats and dogs before being used as clinical treatments for humans as the physiological makeup is similar. In turn, the acupuncture points of small animals have been matched up with those of humans.

In the past, traditional Chinese veterinary medicine was used primarily for the big animals that were used for food, farming and transportation.

He said that in 1990 she noticed her patients were changing from large animals to small ones. Her last big animal patients were the horses and mules that transported the capital's garbage before they were replaced by mechanized vehicles.

Help for the aged

With the country's economic growth, pets have become an important part of people's lives, and owners such as He Na have forged strong emotional bonds with their pets.

He Na visited China Agricultural University Veterinary Teaching Hospital with her father, seeking help for their 15-year-old schnauzer, Defu, who was in a stroller covered with a green vest and quilt. Defu became paralyzed in December, and the family has driven hundreds of kilometers between their Beijing home and the hospital since then so he can receive acupuncture treatment.

They said Defu was like a member of the family, and they would pay for his treatment no matter how much it cost.

Defu has age spots showing through his sparse fur, a spinal, cataracts and is deaf.

"Animals face health problems as they age, the same as humans," He Jingrong, the retired vet, said.

With vaccination for epidemic diseases, timely treatment and good food, dogs can commonly live to the age of 13 to 17, instead of 3 or 4 as they did in the past. However, smaller dogs start to get old at the age of 5 and big ones at 7.

Nearly 90 percent of the patients in the hospital's traditional Chinese veterinary medicine department have lumbar vertebra problems, and most of are quite old, Pang said.

He Jingrong recorded statistics for her patients from 2012 to 2014 that show she treated 145 spinal cases over the three years; 71 percent of the patients were over 7 years old, and more than half were age 20 or older.

Pang said he believes traditional Chinese veterinary medicine has a "bright future" as pets enter old age, because it can provide pain relief treatments with little or no side effects and lower risk than pharmaceutical drug therapies. 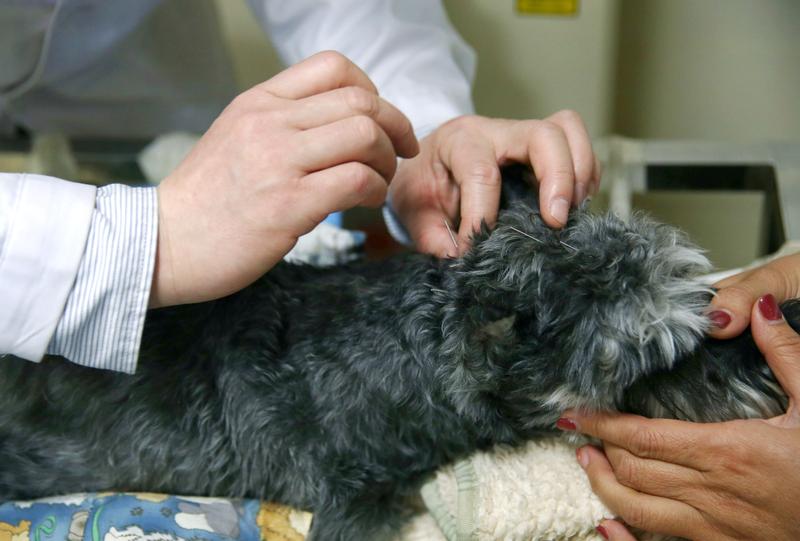 It costs He Na about 300 yuan (US$44.70) for each acupuncture treatment for Defu. She previously spent over 30,000 yuan on the dog's surgery for a benign tumor.

Last year, the value of China's pet care market reached about 171 billion yuan, up 27 percent year-on-year, according to Goumin, an online network for pet owners. It is expected to hit 200 billion yuan next year.

On average, owners spent more than 5,000 yuan on their dogs or cats last year, an increase of 15 percent year-on-year.

In recent years, traditional Chinese veterinary medicine has grown in popularity, and owners now seek treatment to cure many other ailments, such as digestive problems and tumors, when Western medicine or surgery has failed.

As traditional Chinese veterinary medicine can currently only be found in first-tier cites such as Beijing, Shanghai and Guangzhou, Guangdong province, Pang has treated many pets from as far afield as Urumqi, in northwestern China's Xinjiang Uygur autonomous region.

Because pets are not allowed on trains, one dog owner drove for more than 11 hours from Qingdao, Shandong province, to Beijing to seek treatment for her 9-year-old golden retriever.

"It would be lovely if traditional Chinese veterinary medicine could be available locally," said the owner, who wanted to use herbal medicines to nurse her dog, who had just had stomach surgery. "Then we wouldn't have to waste time on the road."

Wang, who stayed at a hotel near the hospital for about half a month as Anbei was treated, said she has full confidence in traditional Chinese veterinary medicine because it successfully treated the other dogs in Anbei's ward.

"I knew my dog would survive as soon as we got here," she said.