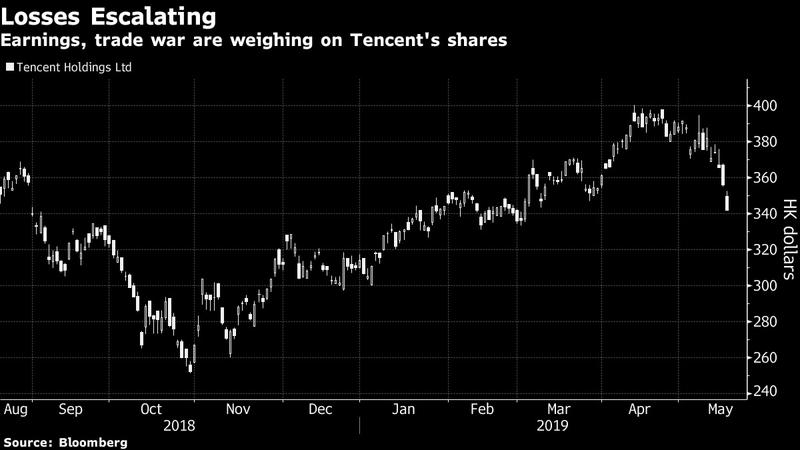 A quickening tumble in Tencent Holdings Ltd. is likely to aggravate this month’s slump in Hong Kong equities as the trade tensions intensifies in the tech sector.

Tencent has plunged 14% since last month’s high to wipe out US$66 billion of value, and selling momentum in the stock is the most intense since October. After being the biggest contributor to gains on Hong Kong’s Hang Seng Index earlier this year it’s since turned into the largest drag.

Unimpressive first-quarter earnings spurred rare downgrades, with analysts now the least bullish since 2016, while the Chinese release of a Battle Royale-style shooter was met with disappointment. As the US tightens the noose on Huawei Technologies Co., investors are bailing out of Chinese tech companies -- Alibaba Group Holding Ltd. sank the most in six months on Monday and Baidu Inc. tumbled more than 8%.

With the Hang Seng Index closing below the support level of 28,000 on Monday, souring sentiment toward such a heavyweight Tencent makes the gauge more vulnerable to further losses, especially as trade war rhetoric turns more strident. The gauge dropped 0.5% on Tuesday to close at its lowest level since January, with Tencent falling for a fourth day.