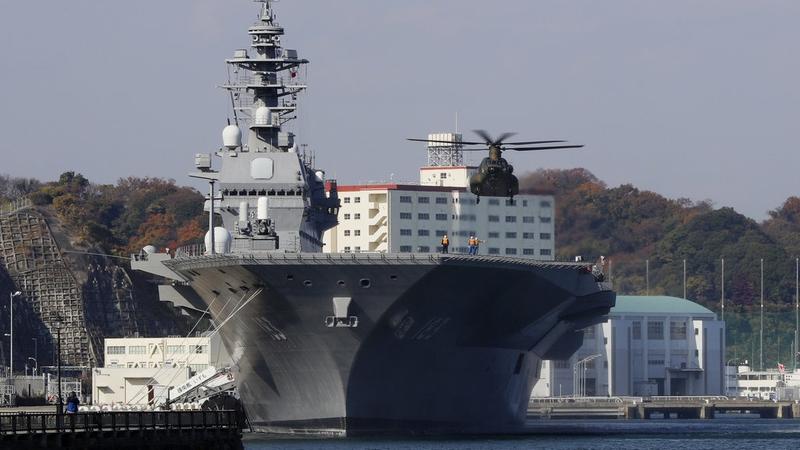 In this Dec 6, 2016 file photo, a helicopter of Japan Self-Defense Forces prepares to land on the flight deck of the helicopter destroyer Izumo in Yokosuka, south of Tokyo. (EUGENE HOSHIKO / AP)

TOKYO - Japan's government on Friday approved an eighth straight annual increase in defense spending to a record high as it buys US-made stealth fighters, interceptor missiles and other equipment.

Japan's parliament, which is dominated by Prime Minister Shinzo Abe's ruling Liberal Democratic Party, will vote on the spending plan next year.

Despite a constitution that forbids the possession of offensive weapons, Japan is one of the world's biggest military spenders. Outlays on defense have increased by almost 15 percent in less than a decade.

Much of Japan's recent defense spending splurge has gone on equipment supplied by US defense contractors such as Lockheed Martin Corp and Raytheon Co. Local makers such as Mitsubishi Heavy Industries have seen their share of defense spending shrink.

US President Donald Trump has thanked Abe for buying the US equipment, helping ease trade tensions between the allies.

Big-ticket purchases next year will include nine Lockheed Martin F-35 stealth fighters, including six short take-off and vertical landing (STOVL) B variants it wants to fly off aircraft carriers, for 107 billion yen. Japan plans to deploy them to extend the operational range of its Self Defense Forces.

Japan's Ministry of Defense will also spend more than US$1 billion to strengthen its ballistic missile defenses (BMD), including the purchase of a new generation of missiles designed by Raytheon to shoot down incoming warheads in space. It is also appropriating funds to begin building two ground-based Aegis Ashore missile tracking stations with powerful new radars.