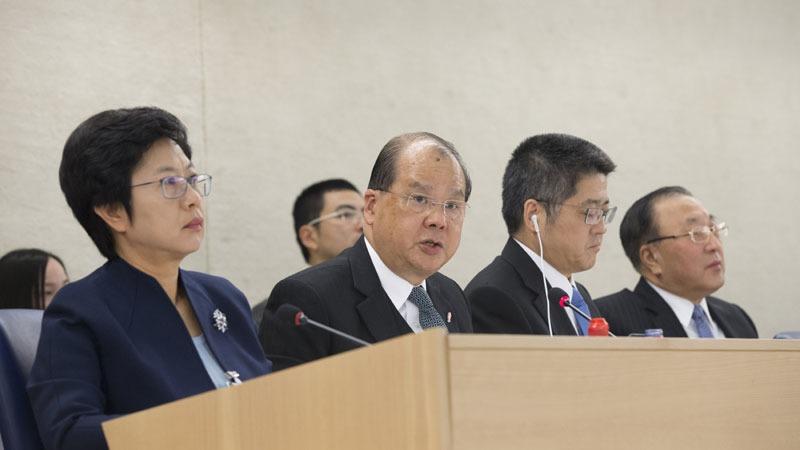 HONG KONG - Chief Secretary of the Hong Kong Special Administrative Region Matthew Cheung Kin-chung said the city has been enjoying a high degree of autonomy under "one country, two systems" and that fundamental rights and freedoms all guaranteed by the Basic Law, according to a government press release issued on Wednesday.

Cheung was speaking at a review meeting of the Universal Periodic Review (UPR) Working Group of the United Nations Human Rights Council in Geneva, Switzerland on Tuesday.

Recent concerns over some aspects of Hong Kong's human rights situation are unwarranted, unfounded and unsubstantiated. They arise from misconception and a lack of understanding of our real situation

A team of HKSAR government officials, led by Cheung, attended the meeting as members of the China delegation.

In response to concerns and questions raised by member states, he said recent reports on Hong Kong’s human rights situation are unfounded, and that human rights in the city are fully protected by the Basic Law.

"Recent concerns over some aspects of Hong Kong's human rights situation are unwarranted, unfounded and unsubstantiated. They arise from misconception and a lack of understanding of our real situation," he said.

Speaking at the meeting in his capacity as the Deputy Head of Delegation led by the Vice Minister of Foreign Affairs, Le Yucheng, Cheung said the HKSAR government is firmly committed to protecting press freedom and does not exercise any censorship.

"On a recent work visa extension case, we will not comment on any specific decision on our immigration control. All such decisions are made by our immigration authorities under the laws and prevailing policies, having regard to individual circumstances of each case.

"Any concerns that Hong Kong's freedom of speech and of the press is under threat are totally groundless. On the contrary, we maintain an environment conducive to the operation of a free and active press. Some 80 foreign media organizations operate in Hong Kong and rigorously perform their role as a watchdog," Cheung said.

Speaking on the eligibility for running in the Legislative Council election, Cheung pointed out that "Article 1 of the Basic Law stipulates that HKSAR is an inalienable part of the People's Republic of China."

"HKSAR has the duty to safeguard our country's sovereignty, security and development interests.  A person who promotes 'Hong Kong independence' or 'self-determination' or advocates independence as an option cannot uphold the Basic Law and swear allegiance to HKSAR," he said.

READ MORE: Freedom of speech is not an absolute right

As for Article 104 relating to oath-taking when assuming specified public offices, the Standing Committee's interpretation simply explained clearly the meaning of that Article without changing its content.

The UN Working Group meeting noted that since the establishment of the HKSAR in 1997, Hong Kong had remained the world's freest economy, a vibrant international financial and business center, a thriving logistics and tourism hub, as well as one of the safest cities in the world

Whilst the HKSAR government would not comment further on the decision to ban an organization under the Societies Ordinance as appeal has been lodged, Cheung pointed out that "Hong Kong people do enjoy freedom of association and expression but, like any other jurisdictions, such freedom is not absolute.

The International Covenant on Civil and Political Rights provides that restrictions may be imposed by law if this is necessary to protect national security or public safety, public order, or the rights and freedoms of others. This is mirrored in the Hong Kong Bill of Rights."

Cheung took the opportunity to dispel the misunderstanding that some protesters were targeted for exercising their civil rights.

"I must clarify that these protesters were convicted not because of their beliefs or their exercising civil rights, but because of their disorderly or violent conduct in breach of the law. They have crossed the line separating the lawful exercise of constitutional rights from unlawful activities subject to sanctions," Cheung explained.

"I must say that the number of public meetings and processions in Hong Kong last year was ten times over 1997, and the overwhelming majority of these activities were orderly and peaceful. This demonstrates that freedom of peaceful assembly is fully respected," Cheung said.

On speculations of authorities of other jurisdictions taking law enforcement actions in Hong Kong, Cheung said that the Hong Kong police had investigated and found no evidence in support of such claims.

The UN Working Group meeting noted that since the establishment of the HKSAR in 1997, Hong Kong had remained the world's freest economy, a vibrant international financial and business center, a thriving logistics and tourism hub, as well as one of the safest cities in the world.

"We are committed to building a caring and fair Hong Kong, with the government investing heavily in education, medical services, welfare, infrastructure, poverty alleviation and helping the ethnic minorities,” Cheung said.

The meeting noted that since the establishment of the HKSAR in 1997, the HKSAR government "has been implementing 'one country, two systems' and 'Hong Kong people administering Hong Kong' under a high degree of autonomy in strict accordance with the Basic Law of the HKSAR and with the full support of the Central People's Government."

The rule of law, executive, legislative and independent judicial power and power of final adjudication, as well as human rights and freedom are all fully guaranteed by the Basic Law. Hong Kong has been ranked as the world's most open and freest economy for many years. Such achievement is underpinned by HKSAR's strengths such as the fine tradition of rule of law, a free and open market, an efficient public sector and a robust institutional framework.

The working group also noted that, alongside with the promotion of economic development, the HKSAR government had devoted significant resources to education, poverty alleviation, helping the disadvantaged, caring for children and support for the ethnic minorities, with a view to building a caring, equitable, inclusive and "people-oriented" society. All these bear strong testimony to the successful implementation of "one country, two systems", the achievements of which are widely recognized.