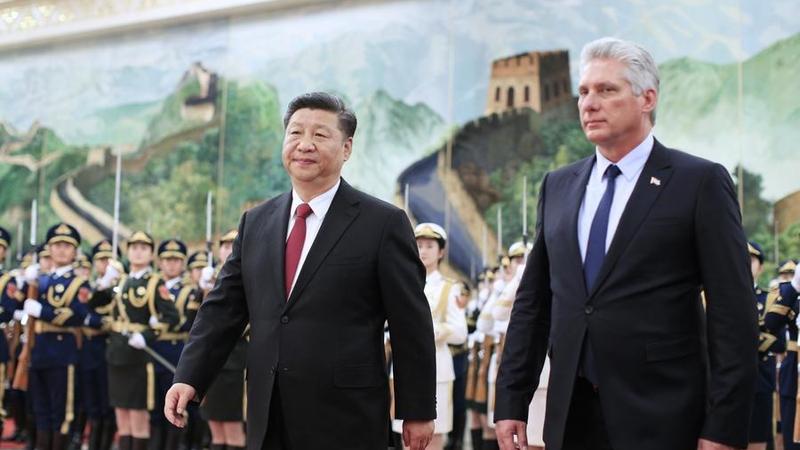 China and Cuba agreed on Thursday to deepen their friendship and jointly write a new chapter in their bilateral cooperation.

Xi called on the two sides to continue to support each other on issues related to respective core interests and major concerns, adding that China will resolutely support Cuba safeguarding its national sovereignty

President Xi Jinping and Cuban President Miguel Diaz-Canel witnessed the signing of a series of cooperative documents after their talks at the Great Hall of the People in Beijing.

Speaking to Diaz-Canel, who was in Beijing on his first state visit to China after taking office in April, Xi said China and Cuba, both socialist countries, are good friends, good comrades and good brothers, adding that bilateral ties have withstood the test of time and changes in the international situation.

Xi recalled Cuba taking the lead 58 years ago in establishing diplomatic relations with China under the leadership of Comrade Fidel Castro, and he recollected the good memories of his meetings with Castro during his two separate visits to Cuba.

He called on the two sides to continue to support each other on issues related to respective core interests and major concerns, adding that China will resolutely support Cuba safeguarding its national sovereignty and pursuing the socialist path that suits its national conditions.

Xi lauded Cuba's positive and crucial role in promoting relations between China and Latin America and the Caribbean, saying China is ready to maintain close coordination with Cuba in major international and regional issues.

China welcomes Cuba participating in construction of the Belt and Road, Xi said, adding the two sides should move forward key cooperation projects in such fields as trade and economics, energy, agriculture, tourism and biopharmaceuticals.

He called for cultural and people-to-people exchanges between the two countries, especially among youth.

Prior to the talks, Xi held a welcoming ceremony for the Cuban leader, who also attended the opening of the China International Import Expo in Shanghai on Monday.

Diaz-Canel told Xi the new generation of Cuban leaders will unswervingly keep consolidating the traditional friendship with China that features comradeship and brotherhood.