US told to stop meddling in HK affairs 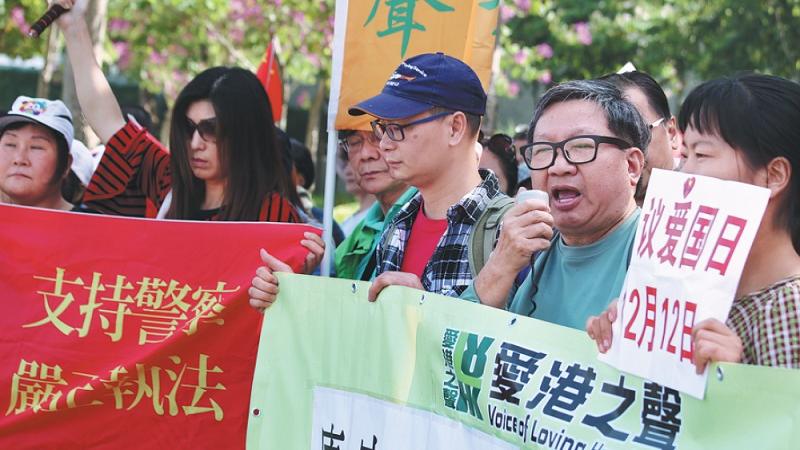 A rally held outside the office of the chief executive of the Hong Kong Special Administrative Region on Nov 20, 2019 calls for support for police and an end to violence and unrest in the city. (PHOTO / CHINA DAILY)

The United States Senate's passage of the so-called Hong Kong Human Rights and Democracy Act of 2019 has prompted strong opposition and protest from China, which warned it will take countermeasures to safeguard its sovereignty, security and development interests.

The US should immediately take measures to prevent the bill from becoming law and stop meddling in Hong Kong affairs and interfering in China's internal affairs, or negative consequences will boomerang, Foreign Ministry spokesman Geng Shuang said in an online statement on Wednesday.

The bill would require annual US certification of human rights in Hong Kong to determine whether the US would continue the separate status it provides the special administrative region in trade and finance. The US House of Representatives approved a similar measure last month.

The two pieces of legislation aren't identical, and the two chambers would have to work out their differences before any legislation could be sent to US President Donald Trump for his consideration.

Since Hong Kong's return to the motherland in 1997, the practice of "one country, two systems" has been proven to be a universally recognized success

Since Hong Kong's return to the motherland in 1997, the practice of "one country, two systems" has been proven to be a universally recognized success, Geng said, adding that citizens in Hong Kong now enjoy democratic rights at an unprecedented level and lawfully practice their freedoms.

The act paints rioters' criminal activities as the pursuit of human rights and democracy, when the truth is that violent criminals have rampantly smashed facilities, committed arson, bullied and attacked innocent civilians, forcibly occupied university campuses, mobbed young students and assaulted police officers in a premeditated way, he said.

He said that the aim is to bolster the anti-China extremists and violent radicals who attempt to damage the city's prosperity and stability so as to contain China.

Such vicious moves will not only undermine China's interests but also US interests in Hong Kong, he said, adding that attempts to interfere in or impede China's development will be in vain.

The spokesman for the Hong Kong and Macao Affairs Office of the State Council, Yang Guang, said Hong Kong will be prosperous and stable in the long term under the strong support of the Chinese mainland and Hong Kong people's lawful rights and freedoms will be guaranteed.

Swift condemnation also followed from the Foreign Affairs Committee of the National People's Congress, which said that stopping the violence and restoring social stability are the priorities for Hong Kong because they are in the public's interest and will protect human rights there.

Meanwhile, the Committee of Foreign Affairs of the Chinese People's Political Consultative Conference National Committee stressed in a statement that "if the US obstinately holds on to the wrong beliefs and sticks to its wrong stand, we support the central government carrying out strong countermeasures".

In Hong Kong, the Liaison Office of the Chinese Central People's Government in the Hong Kong Special Administrative Region took the same stance.

A spokesman for the government of China's HKSAR said the act is unnecessary and unwarranted and will harm relations and common interests between Hong Kong and the US.

Stressing that the HKSAR government will continue to implement the "one country, two systems" principle resolutely in accordance with the Basic Law, the spokesman said the HKSAR government attaches great importance to human rights and freedoms and is determined to safeguard them.

After the Senate legislation passed, British political analyst Tom Fowdy tweeted that he thinks the act "aims not really to protect Hong Kong rights, but transform itself into a Trojan horse for American geopolitics".

"Nothing the US can do can change Beijing's stance that Hong Kong is a part of China," Fowdy wrote.

"In turn, those who pay the biggest price of American actions are the Hong Kongers themselves, who will find their city stripped of the market advantages which once made it great," he added.

US businesses in the city are worried that the act will harm the relations and common interests between Hong Kong and the United States.

The American Chamber of Commerce in Hong Kong - which represents over 1,200 US companies doing business in the city - said in an email response to China Daily that passage of the bill may bring "unintended, counterproductive consequences on American business and its ability to continue exercising a strong positive influence in support of Hong Kong's traditional core values".

With US firms in Hong Kong suffering, and considering the close trade connections among the world's major economic entities, a negative chain effect might be inflicted on global businesses, Yung cautioned.

There are 1,344 US companies in Hong Kong, of which 278 are regional headquarters. At the same time, about 85,000 US citizens live in Hong Kong, according to the latest statistics of Invest Hong Kong and the Census and Statistics Department.

According to a spokesman for the HKSAR government, the US has in the past 10 years earned the largest worldwide bilateral trade surplus with Hong Kong among its trade partners, at over US$33 billion in 2018.

Oswald Chan and Luo Weiteng in Hong Kong contributed to this story.