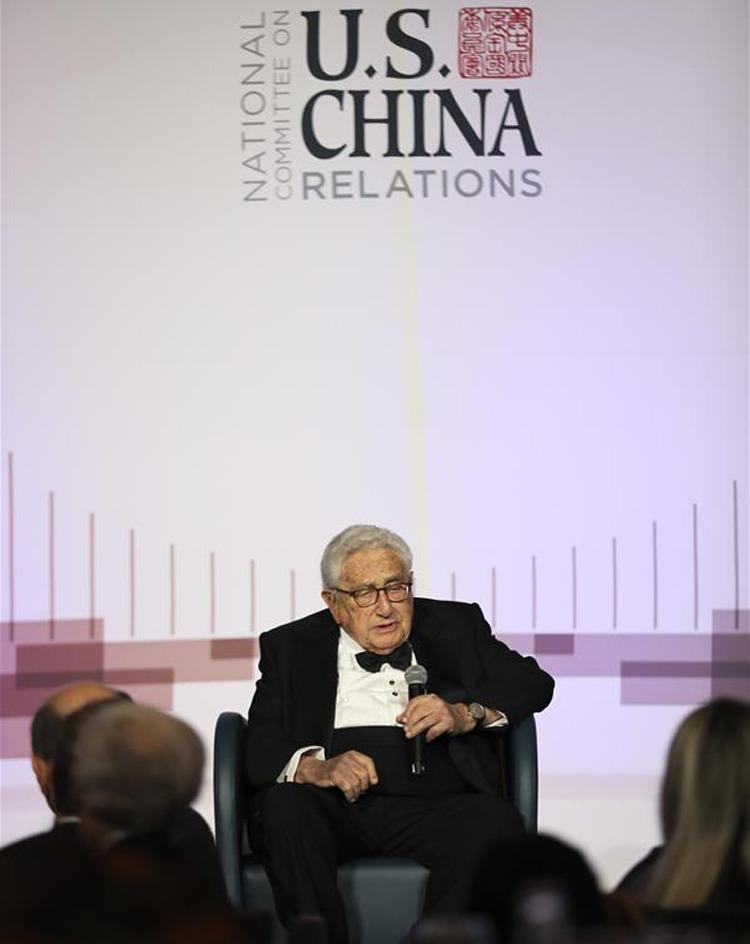 Former US Secretary of State Henry Kissinger speaks at the annual gala dinner of the New York City-based US National Committee on US-China Relations (NCUSCR) in the United States, Nov 14, 2019. (WANG YING / XINHUA)

NEW YORK – The United States and China should make efforts to manage difficulties in bilateral ties for the benefit of both peoples and the future of the world, said former US Secretary of State Henry Kissinger.

In a speech delivered at the annual gala dinner of the New York City-based US National Committee on US-China Relations (NCUSCR) on Thursday, Kissinger said that both sides have to understand that differences are "inevitable" for the two great countries with different senses of history in this world linked by modern economics and technologies.

It is no longer possible to think that one side can dominate the other.

However, he said, it is also imperative for both sides to understand that there will be a "catastrophic outcome" if the differences lead to permanent conflict.

Kissinger also noted that the competition, especially in the field of technology, must be maintained in a healthy way, and in a period where "it is no longer possible to think that one side can dominate the other," China and the United States have to get used to the fact that competition is in a way permanent.

The challenge to both sides "is to see whether we can develop enough of a common conviction about the future, so that we can spare the world a conflict between two great societies," he said.

"I am confident and hopeful that we will overcome the present tensions," Kissinger said. "I hope and really expect that over the years to come, we will feel both sides obliged to move in the direction that I had sketched."

The United States and China should share an obligation to "develop some common conception of the evolution of the world," a task that requires great efforts and may spark new disagreements, said the 96-year-old veteran diplomat and strategist, who served under two US presidents, Richard Nixon and Gerald Ford.

"And then we have to learn to manage these disagreements," he said.