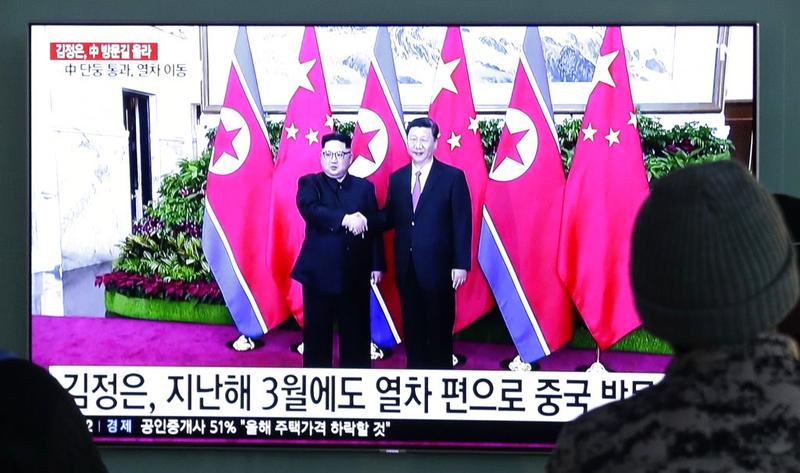 People watch a TV screen showing a footage of DPRK leader Kim Jong-un (left) and Chinese President Xi Jinping during a news program at the Seoul Railway Station in Seoul, Jan 8, 2019. Kim is visiting China from Jan 7 to 10, said a spokesperson from the International Department of the Communist Party of China Central Committee in Beijing. (AHN YOUNG-JOON / AP)

BEIJING —  Kim Jong-un, chairman of the Workers' Party of Korea and chairman of the State Affairs Commission of the Democratic People's Republic of Korea (DPRK), is visiting China, a spokesperson said on Tuesday.

Kim is visiting China from Jan 7 to 10 at the invitation of Xi Jinping, general secretary of the Central Committee of the Communist Party of China (CPC) and Chinese president, said the spokesperson from the International Department of the CPC Central Committee in Beijing.

"He was warmly seen off by leading officials of the Party, government and armed forces organs at the railway station," KCNA reported.

The Republic of Korea's presidential Blue House welcomed the visit, saying it was anticipated to contribute to building peace on the Korean Peninsula

The Republic of Korea (ROK)'s presidential Blue House on Tuesday welcomed the visit as it was anticipated to contribute to building peace on the Korean Peninsula.

Kim Eui-keum, the Blue House spokesman, told a press briefing that Kim's visit to China was anticipated to contribute to the complete denuclearization of the peninsula and the settlement of permanent peace.

The spokesman said exchanges were underway between the two Koreas, between China and the DPRK, and between the DPRK and the United States, noting that each exchange was anticipated to advance others by creating a virtuous cycle among them.

He noted that the ROK hoped the exchange between China and the DPRK would become a stepping stone for the second DPRK-US summit.

The DPRK leader and US President Donald Trump met in Singapore in June last year, holding the first-ever DPRK-US summit. Kim and Trump expressed their hopes to meet again in the near future.