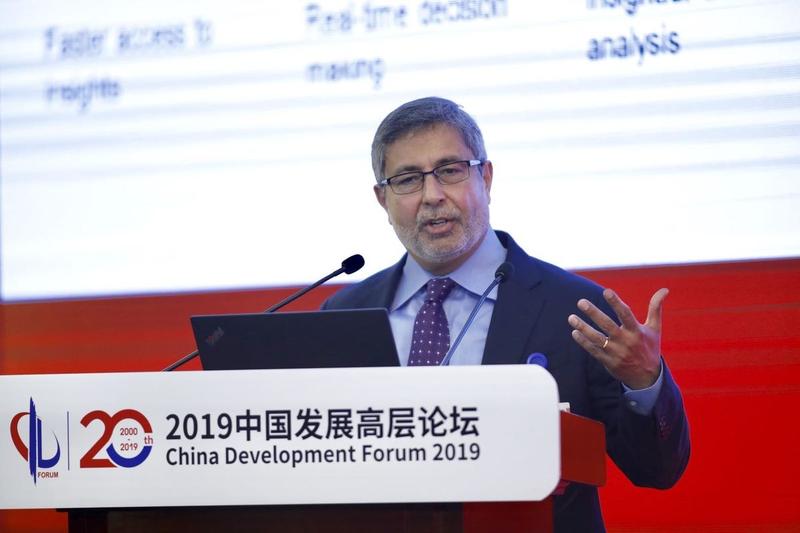 Sanjay Mehrotra, president and CEO of the United States memory chip giant Micron Technology Inc, made a speech at the China Development Forum in Beijing on March 23, 2019. (PHOTO PROVIDED TO CHINA DAILY)

As the global telecommunications community scrambles to commercialize fifth-generation wireless technology, more efforts are needed to ensure that data is safely stored, analyzed and used to prepare for a 5G-enabled world, tech tycoons said at the ongoing China Development Forum in Beijing.

5G will play a direct role in fueling the development of the digital economy, and igniting a cross-sector creativity boom

"If a computer is the brain, 5G is the nervous system, data is the blood, and memory, as well as storage, is very much the heart of all these things," said Sanjay Mehrotra, president and CEO of Micron Technology Inc, a memory-chip manufacturer from the United States.

"More data will be created by billions of devices, and it has to be analyzed and processed quickly. That all happens in the memory and storage devices that Micron makes, and that provides deeper insight for the experiences of human life as well as for businesses," he said at the weekend.

He added that 5G will reshape people's daily lives and business operations, making remote surgeries and self-driving vehicles a reality. To realize such potential, efforts are needed to ensure that data is safely and efficiently stored and processed.

As one of the world's largest makers of memory chips, Micron has been in China for more than a decade. With about 3,700 employees in the country, it has an engineering center in Shanghai and a chip packaging and testing plant in Xi'an, capital of Shaanxi province. To offer better localized products and services, Micron also has sales, marketing and customer labs in Beijing, Shanghai and Shenzhen, Guangdong province.

Yang Yuanqing, chairman and CEO of Lenovo Group, the world's largest manufacturer of personal computers, said 5G will play a direct role in fueling the development of the digital economy and also ignite a cross-sector creativity boom.

"Traditional sectors need to pounce on the opportunities brought by 5G to upgrade themselves and create greater dividends by significantly boosting efficiency," he said.

Yang added that the "intelligent era" will be driven by three key elements - data, strong computing power and algorithms - and next-generation, superfast technology will affect all three.

"About half of the 5G applications will be about its integration with traditional sectors," he said.

"A 5G-enabled world could be either extremely big or small. With tons of faster connections, our network will grow increasingly large and we will pursue more connections. On the other hand, we may go increasingly deeper to explore just one or two connections, which may make our world smaller," he said.

According to Wu, 5G will also feature interaction between the physical and digital worlds, and efforts will be required to ease pressures on people and their fear of the unknown.

A report from the Global System for Mobile Communications Association, which represents the interests of mobile operators worldwide, predicts that China will become the world's largest 5G market by 2025. With an expected 460 million users of the next-generation, superfast network, user numbers will surpass those in Europe (205 million) and the United States (187 million) combined, the report said.

Mats Granryd, the association's director-general, said that after spending billions (of dollars) in the past decade deploying 4G networks to all corners of the country, Chinese mobile operators are now set to invest a further US$58 billion over the next two years to prepare for and begin the rollout of the 5G network.