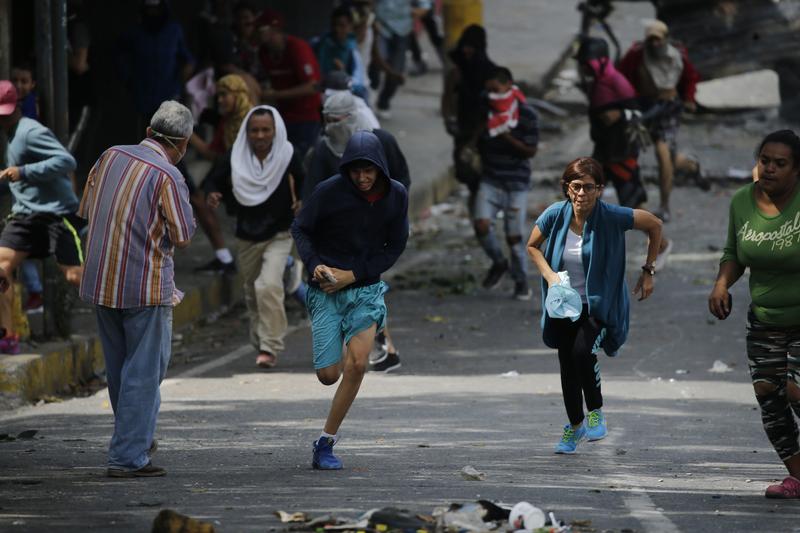 Anti-government protesters run during clashes with security forces as they show support for an apparent mutiny by a national guard unit in the Cotiza neighborhood of Caracas, Venezuela, Jan 21, 2019. (ARIANA CUBILLOS / AP)

Dozens of foreign governments have refused to recognize President Nicolas Maduro's second term, some saying they are ready to recognize Juan Guaido, president of congress, as interim president

Socialist party chief Diosdado Cabello said 27 guardsmen were arrested and more could be detained as the investigation unfolds.

The mutiny struck at a time when opposition leaders have regained momentum in their efforts to oust President Nicolas Maduro. They have called for a nationwide demonstration Wednesday, urging Venezuelans — especially members of the armed forces — to abandon Maduro.

The uprising triggered protests in a poor neighborhood just a few kilometers from Venezuela's presidential palace. It was dispersed with tear gas as residents set fire to a barricade of trash and chanted demands that Maduro leave power.

The military said in a statement said that it had recovered all the weapons and captured those involved in what it described as "treasonous" acts motivated by "obscure interests tied to the far right."

It said at around 2:50 am (06:50 GMT), a small group of guardsmen took captive a captain in charge of a police station in western Caracas and then moved across the capital in two military trucks to the poor neighborhood of Petare, where they stole a cache of weapons from another outpost. 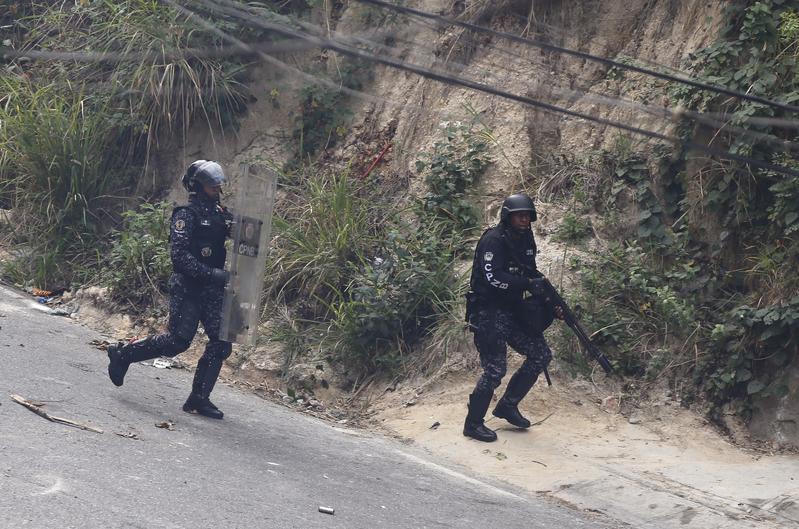 Officials said 25 soldiers were quickly caught at the National Guard outpost 3 kilometers from the Miraflores presidential palace, and two more arrests were made at another location.

A few hours earlier, a group of heavily armed national guardsmen published a series of videos on social media saying they won't recognize Maduro's government, which has come under increasing domestic and international pressure over a newly begun second term that the opposition-controlled congress and many nations consider illegitimate.

In one of the videos, a man identifying himself as 3rd Sgt Alexander Bandres Figueroa, addressing the "people of Venezuela," urges his compatriots to take to the streets to show support for their rebellion.

"You asked to take to the streets to defend the constitution, well here we are," he said in a video shot at night in which several heavily armed men and a national guard truck can be seen in the background.

"You wanted us to light the fuse, so we did. We need your support," he added.

At daybreak in the adjacent neighborhood of Cotiza, a group of shirtless young men, some with their faces covered, built a barricade across the street with a burning car, heavy sewer grates and a large chunk of concrete.

An angry group of women shouted that they have lived for too long without running water and tear gas fired by security forces choked their children.

"Freedom! Freedom!" they chanted. "Maduro has to go!"

"We must defend our homeland," Maria Fernanda Rodriguez, a 36-year-old manicurist, told The Associated Press, her eyes welling from the tear gas. 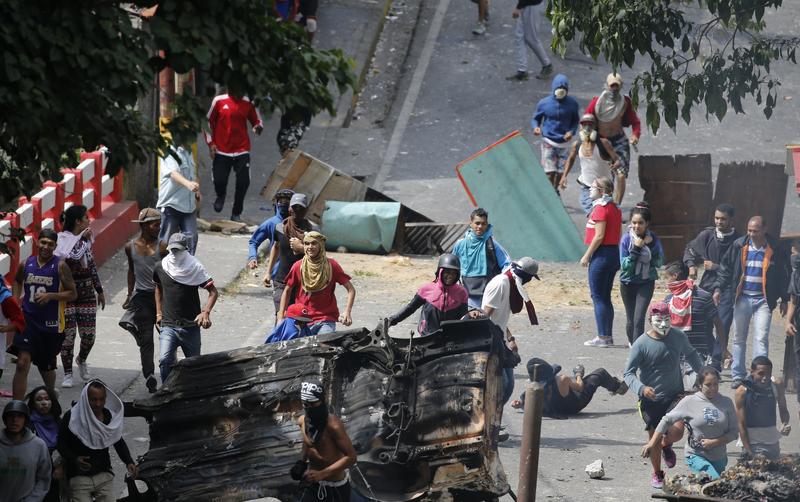 Anti-government protesters face off with security forces as they show support for an apparent mutiny by a national guard unit in the Cotiza neighborhood of Caracas, Venezuela, Jan 21, 2019. (ARIANA CUBILLOS / AP)

Hours later, the government-stacked Supreme Court said it was throwing out recent measures by the National Assembly that declared Maduro's presidency illegitimate, deepening a standoff with the opposition-controlled legislature.

The justices ruled that the new leadership of congress itself is invalid, and urged the country's chief prosecutor to investigate whether congressional leaders acted criminally in openly defying the nation's constitution.

Juan Guaido, a 35-year-old newly seated as president of congress, appealed to the military, urging them to demand Maduro abandon power in a nationwide protests Wednesday — a historic date commemorating the end of Venezuela's military dictatorship in 1958.

Dozens of foreign governments have refused to recognize Maduro's second term, some saying they are ready to recognize Guaido as interim president until fair elections can be held.

In addition, the Trump administration is weighing tougher financial sanctions on Venezuela, while a dozen mostly conservative Latin American and Caribbean governments said they will block officials from Maduro's government from entering their countries and take steps to freeze assets that are the byproduct of corruption. 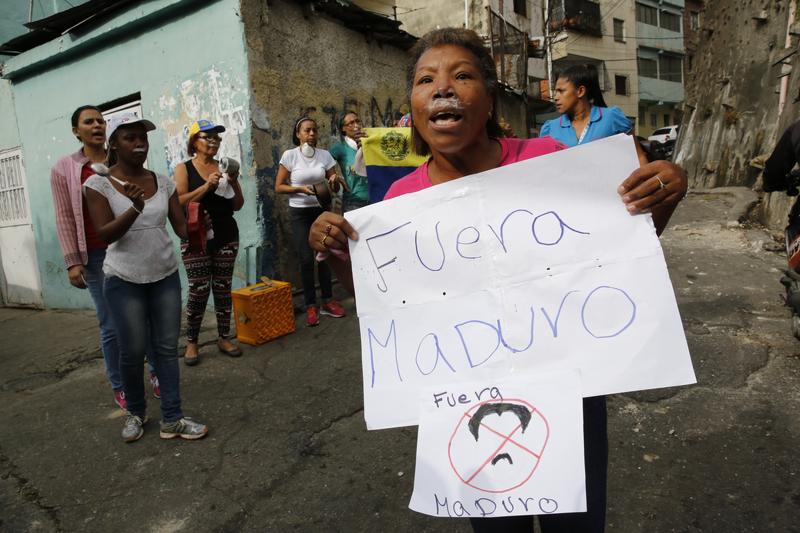 A woman with toothpaste under her nose to help with the effects of tear gas fired by security forces holds a sign that reads in Spanish "Get out Maduro," referring to Venezuelan President Nicolas Maduro, in the Cotiza neighborhood of Caracas, Venezuela, Jan 21, 2019. (ARIANA CUBILLOS / AP)

While discontent among Venezuelans is rising amid widespread food shortages and hyperinflation, Maduro is believed to have the loyalty of his top military command. In the past, troops have easily put down small uprisings.

Defense Minister Vladimir Padrino Lopez said on Twitter that those responsible for the incident would be punished with the full force of the law.

Maduro was the target of an apparent assassination attempt Aug 4 when two drones armed with explosives detonated near him as he spoke at a military parade. Officials have jailed dozens of suspects, including an opposition lawmaker.

In June 2017, rogue police officer Oscar Perez stole a helicopter and flew it over the capital, launching grenades at the Supreme Court building. He and several comrades died in a gunbattle with police after months on the lam. 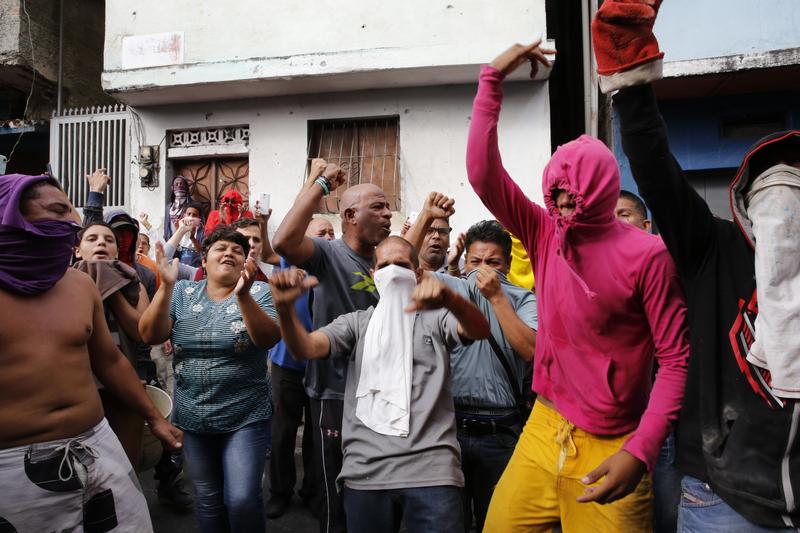 Residents protest in support of a mutiny by a national guard unit and against Venezuelan President Nicolas Maduro in the Cotiza neighborhood of Caracas, Venezuela, Jan 21, 2019. (ARIANA CUBILLOS / AP)

Cabello, Venezuela's powerful socialist party leader, said the opposition demonstration expected Wednesday doesn't worry him, because the government will flood the streets with its own loyal supporters.

"It's the right that stirs up violence — not us," Cabello said. "How many marches do we hold here every week without a single act of violence?"