EU elections primer: How they work, what could happen 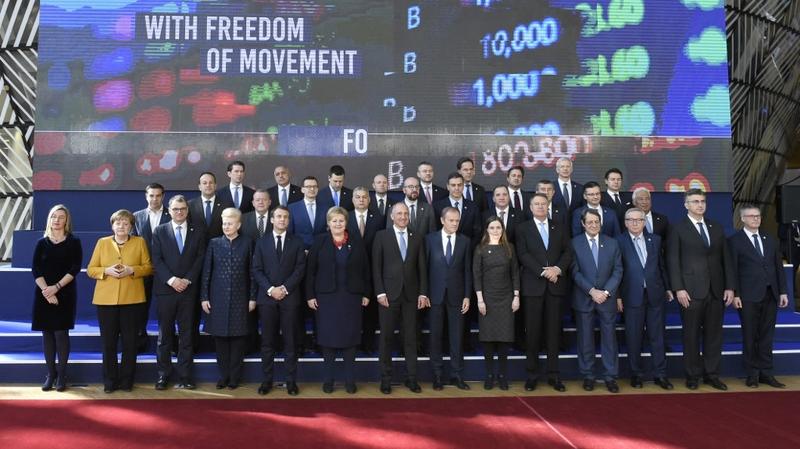 BRUSSELS — European voters started heading to the polls Thursday to choose lawmakers to represent them at the European Parliament for the next five years. In all, 400 million voters in 28 nations will be voting over the next four days. Here's a look at that massive exercise in democracy, a multi-national ballot by the European Union's only democratically elected institution.

An EU survey of public sentiment in April found that voters were most concerned about the economy, unemployment, immigration, the environment and climate change, terrorism and promoting human rights, democracy and social welfare

Who, when, what on the EU vote?

Europe's voting marathon kicked off Thursday in the Netherlands and in Britain. Voters in Ireland turn out on Friday, those in the Czech Republic, Latvia, Malta and Slovakia vote on Saturday and the remaining 21 EU nations cast their ballots on Sunday.

Voters in each EU nation choose some of the 751 lawmakers in the European Parliament, which sits in both Brussels and Strasbourg, France.

Seats in the European Parliament are doled out proportionally based on a nation's population. Cyprus, Luxembourg and Malta have the fewest seats with six each, while the EU's most populous member, Germany, has 96 seats.

The results from every nation will be released on Sunday after the last polling station in the continent is closed.

How important is the European Parliament?

The assembly also has a say in treaties ranging from trade talks to Brexit.

The EU's powerful executive arm, the European Commission, proposes laws while EU lawmakers amend and negotiate their content with national governments, which are the real font of European power and are represented by the EU Council.

Often, the big impact of these EU elections is on the domestic politics of individual EU nations, like support in Britain for the anti-Europe UK Independence Party in 2014 or the massive gains in France by Marine Le Pen's far-right National Front party, which has now rebranded as the National Rally. The polls are often used by disgruntled citizens to cast protest votes against their own national governments.

What are the issues in the EU election?

There are no "European citizens" as such, so voters tend to respond to national interests.

How Europe handles migration is a very significant concern for voters in Italy, Hungary, Poland and elsewhere. Economic concerns often influence voters, and Britain's future in the EU looks like being a factor again.

An EU survey of public sentiment in April found that voters were most concerned about the economy, unemployment, immigration, the environment and climate change, terrorism and promoting human rights, democracy and social welfare. 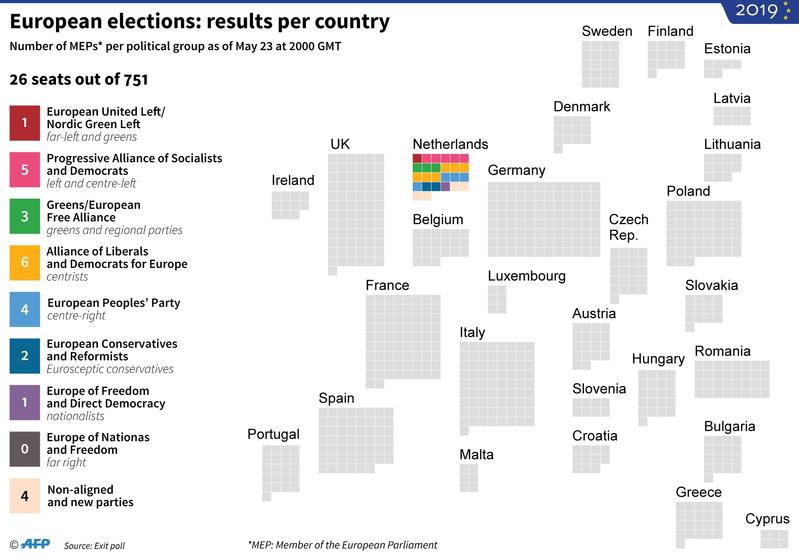 Who's likely to win what?

The projections from April suggest that the center-right European People's Party will remain the biggest bloc in the European Parliament with an estimated 180 seats, dropping from 217 seats in 2014.

The center-left Socialists and Democrats group is also expected to lose ground, sliding from 186 seats to 149.

Among other mainstream parties, the liberal ALDE alliance is expected to capture 76 seats, eight more than in 2014, while the Greens could rank fourth with some 57 seats, up from 52. However, the liberals now appear set to create a new group with French President Emmanuel Macron's centrist party.

As for the far-right and nationalists, the Europe of Nations and Freedom group, which combines parties like Italy's League, Britain's UKIP and France's far-right National Rally, is predicted to win 62 seats, compared to 37 currently.

New parties such the Brexit Party in Britain are listed as "other" in a mixed bunch that is forecast to expand from 21 seats to 62.

How will the vote change Europe?

Europe's mainstream political groups appear set to hold control over the assembly but, depending on the results, they could be pressured into uncomfortable compromises or awkward alliances in order to pass EU legislation.

Populist and nationalist parties have found rising support in national elections in many EU countries, but their pan-European impact would depend on whether they can form a strong political group in Brussels. That certainly is their goal. Italy's hard-line interior minister, Matteo Salvini, head of the League party, has been putting together a populist group of national parties that he says aims to fundamentally shake up EU politics.

Forming such a group is not easy — 25 lawmakers are required, with at least one-quarter of the EU's 28 nations represented — but it's important because it opens up valuable access to EU funds and political influence. 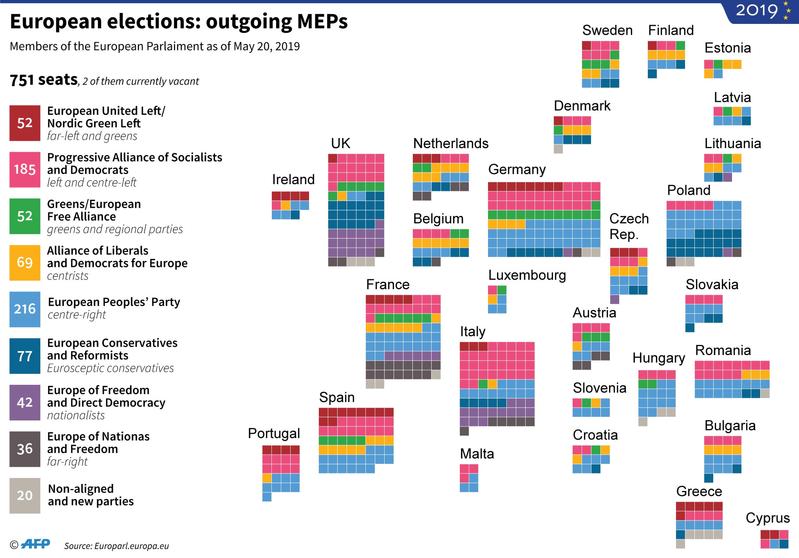 This AFP graphic shows the outgoing Members of the European Parliament (MEPs) by country.

What happens after the elections?

Once the results are in, the newly elected EU lawmakers will begin haggling to form parliamentary groups.

The present European Parliament's term ends July 1 and the new parliament will take their seats in Strasbourg the following day. At the first plenary on July 2, they will elect the president, 14 vice presidents and five other senior officials in the House, as well as decide on the number and composition of parliamentary committees.

EU leaders will meet on Tuesday to choose candidates for the bloc's top jobs. Between July and October, the assembly is called on to endorse those candidates, notably the new president of the European Commission. Parliamentary hearings will then begin to confirm EU commissioners in charge of specific policies.