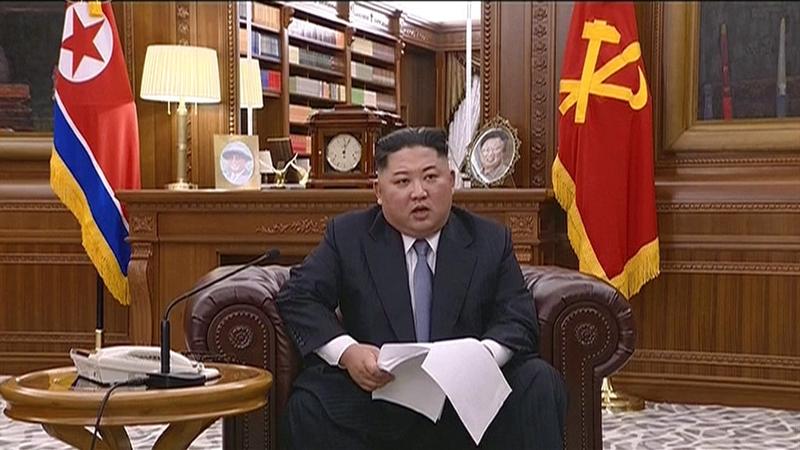 In this undated image from video distributed on Jan 1, 2019, by DPRK broadcaster KRT, DPRK leader Kim Jong-un delivers a speech in the DPRK. (KRT VIA AP)

PYONGYANG/SEOUL - Kim Jong-un, top leader of the Democratic People's Republic of Korea (DPRK), said Tuesday that he would push forward the denuclearization of the Korean Peninsula and was ready to meet with US President Donald Trump at any time.

We could be left with no choice but to seek a new way if the US does not make good on its promises, misjudges our patience, while seeking to force things unilaterally and clinging to sanctions and pressure

"I am always ready to sit down again with the US president at any time and will make efforts to produce an outcome that the international community would welcome," Kim said.

In his New Year speech broadcast on the state-run television, he stressed his determination to work to build new relations with the United States, establish lasting peace on the Korean Peninsula and seek "complete denuclearization," on the condition that the United States takes corresponding measures.

"We could be left with no choice but to seek a new way if the US does not make good on its promises, misjudges our patience, while seeking to force things unilaterally and clinging to sanctions and pressure," Kim warned.

The DPRK leader said he was willing to reopen the inter-Korean industrial park in the border city of Kaesong and resume a suspended tour program to Mount Kumgang on the east coast "without any preconditions."

Both the Industrial park and Mount Kumgang tourist zone have been closed for a few years.

The Republic of Korea (ROK) on Tuesday welcomed the New Year's speech by Kim.

Seoul's unification ministry said in a statement that the government hailed Kim's speech in which the DPRK leader showed his stance that his country will continue efforts for the Korean Peninsula's complete denuclearization, the establishment of permanent peace, and the expanded development in relations with the ROK.

ALSO READ: DPRK says it needs trust in US before denuclearization

The statement said the ROK has maintained its position that it will sincerely implement inter-Korean agreements to develop inter-Korean ties in an epoch-making way, while making efforts to completely denuclearize the peninsula and build lasting peace.

It noted that the government will make best efforts to advance inter-Korean reconciliation and cooperation to make the inter-Korean relations developed in an irreversible way, while closely cooperating with the international society for the peninsula's complete denuclearization and the settlement of permanent peace.