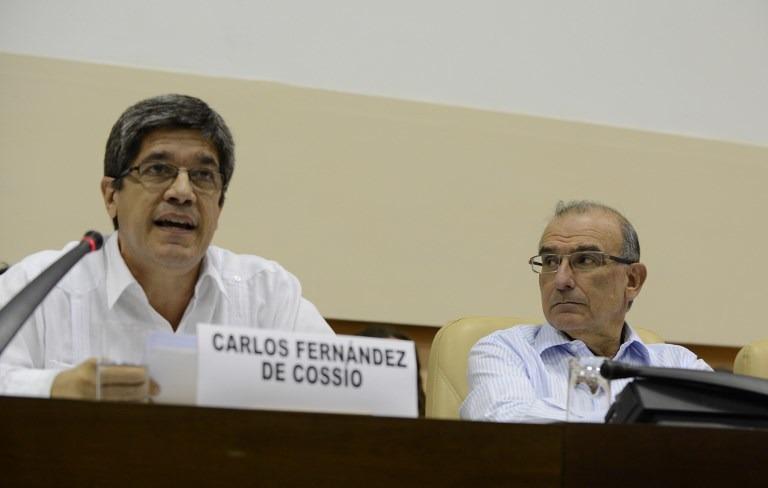 Humberto de la Calle (right), head of the Colombian Government delegation in Peace Talks with FARC-EP, listens to Cuban mediator Carlos Fernandez de Cossio (left) during a press conference at Convention Palace in Havana, on May 26, 2013 after the announcement that both delegations arrived to an agreement on the first item of a five-point agenda, land reform. (ADALBERTO ROQUE / AFP)

HAVANA — A senior Cuban official on Tuesday denied US allegations of so-called "sonic attacks" on its diplomatic personnel, calling them as fabricated.

In October 2017, US President Donald Trump said he believed Cuba was responsible for the attacks, but offered no evidence to back up his claim

"There has been no attack or deliberate act against any American diplomat, and the (US) State Department knows it," Carlos Fernandez de Cossio, director for US affairs at the Cuban Foreign Ministry, said in an interview published by state daily Granma.

He said Cuban and American experts investigating the matter support what authorities in Havana have said from the beginning: the attacks never happened.

De Cossio said the initial theory of sonic attacks could not withstand the analysis of the scientific community and police investigations carried out by both countries.

"For months they have been saying that four diplomats suffered brain concussions but without a concussion taking place," De Cossio said.

A recent article in The New York Times, he said, cited "new, unnamed witnesses," including the alleged vehicles circling the residences of the diplomats, which could have "possibly emitted microwaves that caused brain damage."

According to De Cossio, describing the mysterious afflictions reportedly suffered by US diplomats as "attacks" serves to undermine bilateral ties.

In October 2017, US President Donald Trump said he believed Cuba was responsible for the attacks, but offered no evidence to back up his claim. Washington thereafter reduced its personnel at the embassy in Havana and expelled Cuban diplomats.