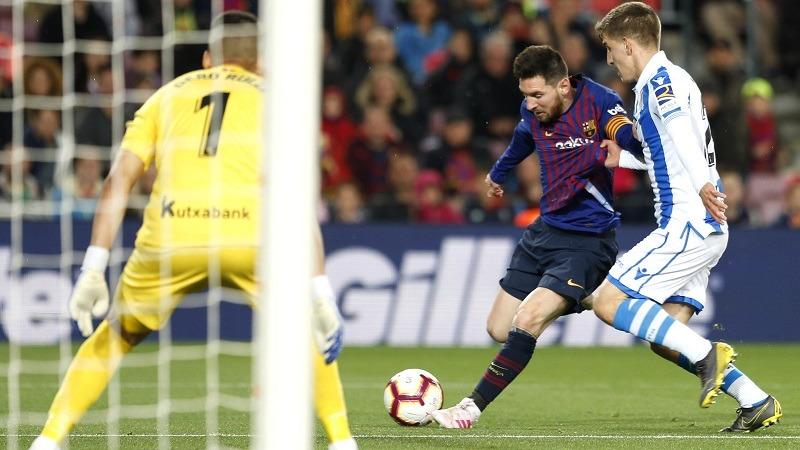 MADRID - Step by step, Barcelona is moving closer to the treble.

Days after beating Manchester United to reach the Champions League semifinals, Barcelona turned its focus to the Spanish league and defeated Real Sociedad 2-1.

People may think we are the champions already, but we are not. We have to keep winning our matches until the league title is finally decided

Clement Lenglet and Jordi Alba scored a goal in each half at Camp Nou Stadium as Barcelona kept a nine-point lead over Atletico Madrid, which had beaten Eibar earlier in the day. The Catalan club can secure its eighth league title in 11 seasons midweek if it wins at Alaves and Atletico loses to Valencia at home. That would leave Barcelona 12 points ahead of Atletico with only four games left and a better head-to-head record.

Lionel Messi and other regular starters had been rested in the 0-0 draw against last-place Huesca last weekend as coach Ernesto Valverde prioritized the Champions League quarterfinal second leg against United. Barcelona wants to seal the league title as soon as possible so it can fully focus on the European tournament it hasn't won since 2015. After beating United 4-0 on aggregate, it will face Liverpool in the semifinals in May.

"Playing after these Champions League matches are always difficult," Valverde said. "People may think we are the champions already, but we are not. We have to keep winning our matches until the league title is finally decided."

Barcelona will also play in the Copa del Rey final against Valencia on May 25.

The win at Camp Nou extended Barcelona's unbeaten streak to 20 matches in all competitions. It hasn't lost in the league since November.

Barcelona was far from its best on Sunday, but it still had enough to earn the win against its mid-table opponent.

Lenglet opened the scoring with a header off a corner just before halftime and Alba netted the winner with a low shot from inside the area in the 64th, just a few minutes after Juanmi equalized from close range for the visitors.

Sociedad, which has won only one of its last nine matches, stayed 10th in the standings. It hasn't been able to win points at Camp Nou in more than two decades. 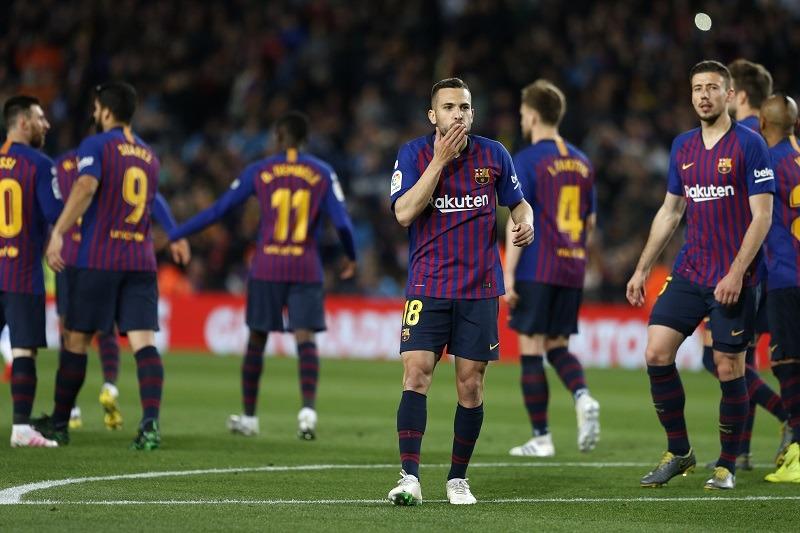 Struggling Barcelona playmaker Philippe Coutinho was jeered again by part of the local crowd when he replaced Ousmane Dembele in the second half.

Atletico Madrid had moved within six points of the lead with a 1-0 win at Eibar, when Thomas Lemar scored in the 85th minute.

Diego Simeone's team is looking to finish runner-up for the second straight season. Before winning the league in 2014, Atletico hadn't finished better than second since 1990-91.

It got the win over Eibar despite playing without suspended forwards Diego Costa and Antoine Griezmann. Costa is out for the season after being handed an eight-match suspension for insulting a referee in a loss at Barcelona two weeks ago.

Atletico struggled to take control of the match at Ipurua Stadium, unable to create many significant scoring chances until Jorge "Koke" Resurreccion broke free and sent a perfect cross for Lemar's close-range shot by the far post.

"It's always difficult to play here," Koke said. "We are glad we were able to win the match. We got the three points and we'll keep fighting until the end."

It was the fourth win in five matches for Atletico, with the only setback being a loss at Barcelona two weeks ago.

Eibar, which has won only one of its last seven matches, stayed 13th in the 20-team standings after 33 matches.

Celta Vigo took a step toward escaping relegation with a 2-1 home win over Girona.

Sofiane Boufal netted the 69th-minute winner for the hosts, which had opened the scoring with Iago Aspas in the 34th before Portu equalized for Girona in the 48th.

The win moved Celta to 14th place, three points from the relegation zone.

Girona, which has lost five straight in the league, dropped to 15th. Its next match is at Valladolid, the first team currently inside the relegation zone.

Also Saturday, second-to-last Rayo Vallecano was held 0-0 at home by last-place Huesca. Rayo had a goal disallowed for offside after a video review early in the second half.