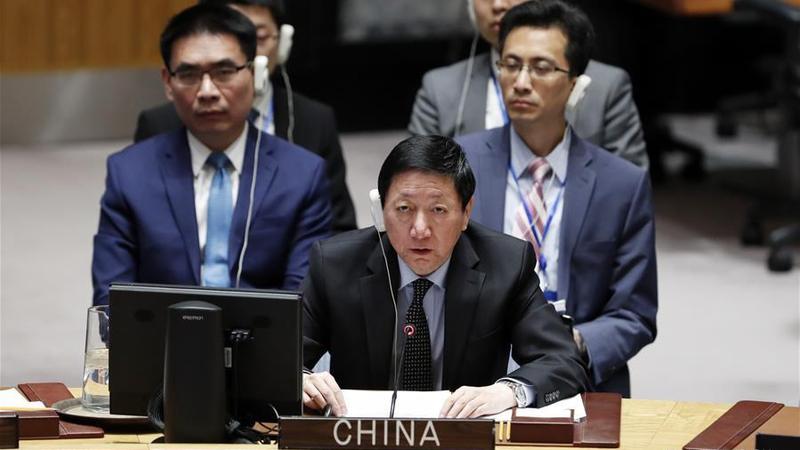 In this April 9, 2018 photo, Wu Haitao, China's deputy permanent representative to the United Nations, addresses a meeting of the UN Security Council at the UN headquarters in New York. On Feb 25, 2019, Wu called on the UN Security Council to review sanctions against Sudan in accordance with the latest situation. (LI MUZI / XINHUA)

UNITED NATIONS — A Chinese envoy on Monday called on the UN Security Council to review sanctions against Sudan in accordance with the latest situation and eventually lift the sanctions.

Speaking at a Security Council meeting on Sudan and South Sudan, Wu Haitao, China's deputy permanent representative to the UN, said that the security situation in Sudan's Darfur region remains generally stable after the United Nations-African Union Mission in Darfur (UNAMID) gradually handed over responsibility for security to the government of Sudan last year.

We believe the measures of the Sudanese government will be conducive to promoting long-term peace and stability of the Darfur region.

China appreciates UNAMID's contribution to the maintenance of peace and stability in Darfur, and welcomes the government of Sudan to take the initiative to enhance governance and security capacity building, Wu said.

"We believe the measures of the Sudanese government will be conducive to promoting long-term peace and stability of the Darfur region," said the Chinese envoy.

Wu said the political process in Darfur should be continued. The government of Sudan has been committed to a political settlement of the Darfur issue, and the opposition parties and armed groups in Darfur should abandon military means of settlement, take an active part in the peace process and solve problems through political means such as dialogue and consultation.

At the same time, Darfur still faces challenges such as ethnic conflicts, displaced persons, and social and economic development, he said.

As the government of Sudan bears the primary responsibility for the security of the Darfur region, the international community should actively help the government to enhance its capacity building in security maintenance and security control, Wu said.

The Sudanese security forces can take over security responsibilities from UNAMID as soon as possible, and UNAMID can be ensured to withdraw from Darfur by 2020 in accordance with the plan, he added.

He also called for international humanitarian assistance and economic support for Sudan.

At present, priority should be helping the Sudanese government to solve the problem of displaced persons to return to their homes, establish and improve local infrastructure construction, improve the agricultural production level and increase the self-sufficiency of food, he added.