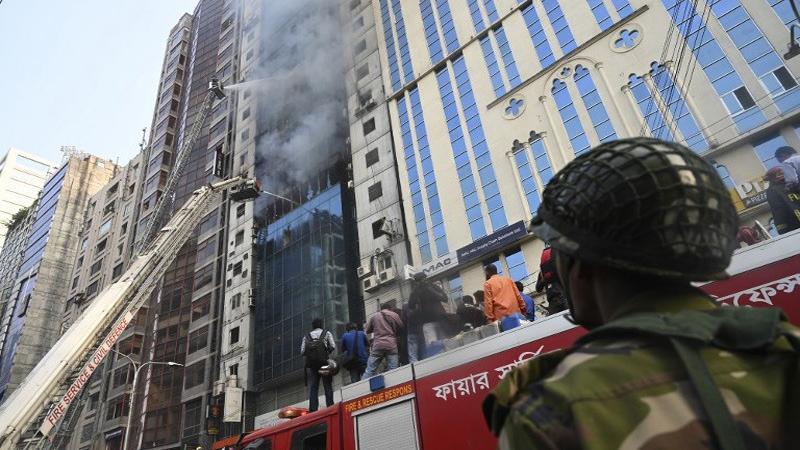 A Bangladehi Army stand guard as Bangladeshi firefighters on ladders work to extinguish a blaze in Dhaka on March 28, 2019. (MUNIR UZ ZAMAN / AFP)

DHAKA, Bangladesh — A fire in a high-rise office building in Bangladesh's capital has been brought under full control with the death toll climbing to 25, fire officials said Friday.

The blaze that burned for several hours Thursday had trapped people inside the building, some shouting for help from windows on upper floors and the roof. But fire officials later said most had been rescued. By Friday morning, no smoke was visible and firefighters and forensic investigators were working at the scene.

Mostak Ahmed, a deputy commissioner of Dhaka Metropolitan Police, told The Associated Press on Friday that the death toll rose to 25 with all but one identified. Based on information provided by relatives, no one appeared to still be unaccounted for, he said. "Still we are checking, if someone comes to us we will verify," he said.

The fire injured about 70 people, many of them now being treated at Dhaka Medical College Hospital's burn unit.

The fire at the FR Tower, on a busy avenue in Dhaka's Banani commercial district, was the latest in a country where crowding, flouted building regulations and safety norms have made deadly blazes common.

Last month, a fire in the oldest part of Dhaka, a 400-year-old area cramped with apartments, shops and warehouses, left at least 67 people dead.

In 2012, a fire at a garment factory killed at least 112 people trapped behind its locked gates. Less than six months later, another building containing garment factories collapsed, killing more than 1,100 people.

Another fire in a house illegally storing chemicals in Old Dhaka killed at least 123 people in 2010.