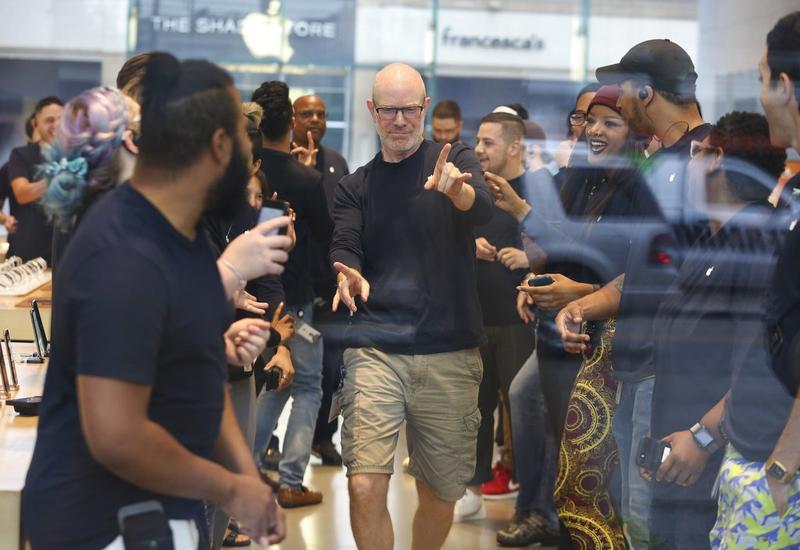 The iPhone XS is as much as US$200 more expensive than last year’s already pricey iPhone X  and represents one of the smallest advances in the product line’s history. But that means little to the Apple Inc faithful or those seeking to upgrade their older iPhone.

Hundreds of consumers lined up at Apple stores around the world either the previous day or in the early hours before the iPhone XS and iPhone XS Max went on sale Friday. Many consumers were seen lining up at the Orchard Road store in Singapore despite the hot weather. Other outlets, such as the IFC mall in Hong Kong, had much shorter lines as sales were largely restricted to those who had pre-ordered.

The global smartphone industry has stalled at about 1.5 billion devices sold each year. But the annual theater of iPhone launch day remains a bright spot

The global smartphone industry has stalled at about 1.5 billion devices sold each year. But the annual theater of iPhone launch day remains a bright spot. For Apple in particular, the length of lines have become less important as it sells more phones online and adjusts its business model. Rather than persuading users to upgrade to the most-advanced, expensive phone each year, Apple’s goal these days is to steadily raise average prices, while expanding the total number of active devices to support sales of accessories and digital services like streaming music and video.

This year, many consumers ordered online so that they got their devices delivered on launch day. But those who missed the opening of pre-orders last week have to visit a physical store to get one on the first day. In the US, as of midday Friday new online iPhone XS orders aren’t scheduled to arrive until between Oct 5 and Oct 12. Wait times are similar in Hong Kong and Australia, while deliveries are taking one to two weeks in Chinese mainland.

In Palo Alto, California, Chief Executive Officer Tim Cook greeted buyers while wearing an Apple Store employee uniform, as has been his custom for several years.

At the Apple Store on Fifth Avenue in New York, one of the world’s most popular locations, 406 people were lined up ahead of doors opening for the iPhone XS, compared with 821 who lined up last year at that store for the iPhone X, according to Gene Munster of Loup Ventures. Last year, 293 people waited in line for the iPhone 8. 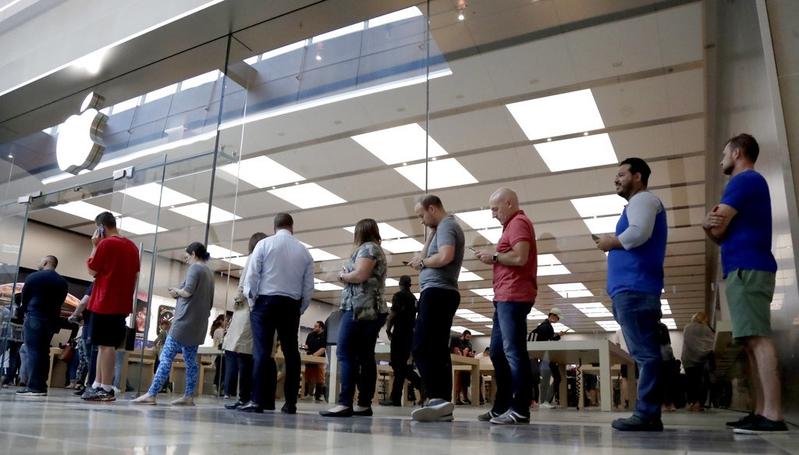 Customers wait in line outside of the Apple Store at the Garden State Plaza on the day the new iPhone XS and iPhone XS Max were released on Sept 21, 2018, in Paramus, N.J. (JULIO CORTEZ / AP)

According to a survey of people in line conducted Friday by Loup Ventures, 70 percent of respondents were seeking to buy the iPhone XS Max, a model that ranges in price from US$1,099 to US$1,449. That was surprising because in previous years about 55 percent of consumers opted for the larger screen size, according to Munster. At the Century City store in Los Angeles, roughly 50 people were lined up for the phones before business hours.

At 8:30 am in London, about 250 people were queuing to enter Apple’s flagship store on Regent Street. At least one person began waiting in line the day earlier, but most people Bloomberg spoke with said they’d been standing for about an hour.

This year’s models include support for dual SIM cards for the first time, a popular feature on Android devices in Asia. That’s what appealed to Li Jun, who works for a trading company in Guangzhou and traveled to Hong Kong to pick up an iPhone XS for HK$9,899 (US$1,265).

“iPhone XS is expensive for me, but I just can’t resist the new dual SIMs feature," Li said. “The feature allows me to have a local SIM card installed when I work abroad, without taking out my Chinese SIM card.”

Dual SIM functionality isn’t as commonly sought after in European markets, but one person queuing in London, who asked not to be identified, said the purchase was entirely based on the appeal of no longer having to carry two phones on international business trips. Another woman in the same line, Eli Di Lauro, who lives in the U.K. capital, said the larger size of the XS Max model was the biggest appeal for an upgrade.

“I bought the iPhone X last year, but I took it back the next day and stuck with my iPhone 7 Plus,” she said. “When you’re used to the bigger size it’s hard to go back to a smaller one.”

Apple Bows to the Chinese Market Again With Latest IPhones

Waiting times are shorter than last year when the iPhone X went on sale. But those looking for the latest Apple Watch aren’t so lucky. New orders of many of the new watch models won’t arrive until the end of October in the U.S., while orders from China are seeing a three to four week wait time. Consumers likely feel they’ll have better luck grabbing one from a retail store.

IPhone Xs Max Versus Samsung Galaxy Note 9: How They Measure Up

This year’s demand isn’t as extreme as the early years of the iPhone, or even last year with the iPhone X. The iPhone XS and iPhone XS Max have faster processors, camera improvements, and the Max offers a bigger screen. But none of the enhancements are significant unless a user upgrading a much older iPhone.

The focus on pre-orders led to disappointment for some. Cao Zhongqiang from Shanghai was told he couldn’t get any devices on the first day without an existing order.

“I hoped I could walk in and buy one, however I was told supply for on-site purchase is insufficient,” Cao said in Hong Kong.