President Xi: China must be, will be reunified 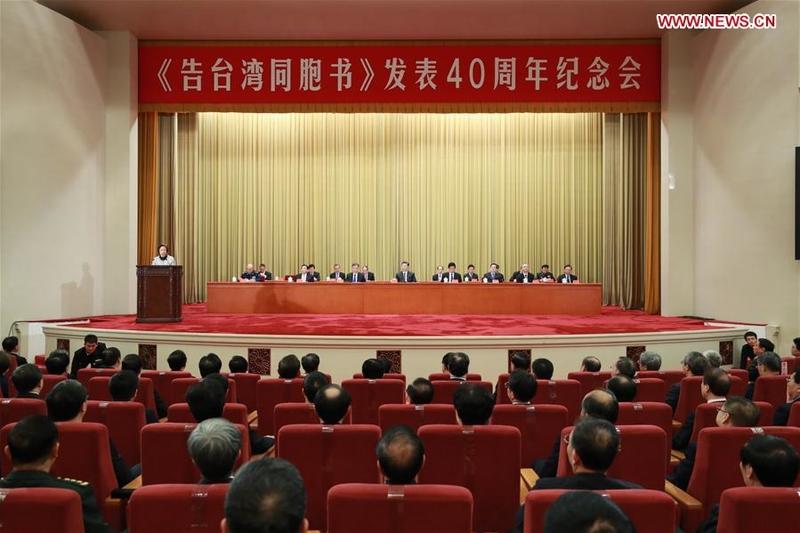 A gathering to commemorate the 40th anniversary of issuing Message to Compatriots in Taiwan is held at the Great Hall of the People in Beijing, capital of China, Jan 2, 2019. (PHOTO / XINHUA)

BEIJING — President Xi Jinping on Wednesday said China must be and will be reunified, as he addressed a gathering in Beijing to commemorate the 40th anniversary of the Chinese mainland's Message to Compatriots in Taiwan.

"It is a historical conclusion drawn over the 70 years of the development of cross-Straits relations, and a must for the great rejuvenation of the Chinese nation in the new era," said Xi, also general secretary of the Communist Party of China (CPC) Central Committee and chairman of the Central Military Commission.

It is a historical conclusion drawn over the 70 years of the development of cross-Straits relations, and a must for the great rejuvenation of the Chinese nation in the new era

Speaking at the Great Hall of the People, Xi called for joint efforts across the Taiwan Straits to advance peaceful national reunification.

The long-standing political differences cannot be dragged on generation after generation, Xi said.

The Taiwan question originated from national weakness and disorder and has lasted for 70 years.

Xi said since 1949 the CPC, the Chinese government and the Chinese people have always unwaveringly taken resolving the Taiwan question to realize China's complete reunification as a historic task.

He expressed confidence that the Taiwan question will definitely end with national rejuvenation.

On Jan 1, 1979, the National People's Congress Standing Committee issued the Message to Compatriots in Taiwan. It was considered a declaration of the mainland's policy for peaceful reunification.

Halt to military confrontations was proposed. Visits, cross-Straits transportation, postal services and economic and cultural exchanges were promoted. A page on cross-Straits relations has been turned.

On Wednesday, Xi raised a five-point proposal for peaceful reunification.

He said the principles of "peaceful reunification" and "one country, two systems" are the best approach to realizing national reunification.

He said on the basis of ensuring China's sovereignty, security and interests of development, the social system and way of life in Taiwan will be fully respected, and the private property, religious beliefs and legitimate rights and interests of Taiwan compatriots will be fully protected after peaceful reunification is realized.

The president pledged "utmost sincerity and greatest efforts" for the prospect of peaceful reunification and said Taiwan will be guaranteed lasting peace after reunification.

"We are all of the same family," Xi said.

While stressing that the "Chinese don't fight Chinese," Xi said, "We make no promise to renounce the use of force and reserve the option of taking all necessary means."

This targets only the interference of external forces and the very small number of "Taiwan independence" separatists and their activities, he added.

"'Taiwan independence' goes against the trend of history and will lead to a dead end," Xi said.

The president said achieving the country's greatness, national rejuvenation and cross-Straits reunification is the trend of history, which can never be blocked by anyone or any force.

The peaceful and stable development of cross-Straits situations and the progress of cross-Straits relations are the tide of the time that can never be stopped by anyone or any force, he said.

Between 1988 and 2018, 134 million cross-Straits visits were logged; two-way trade reached US$2.6 trillion; and the mainland has been Taiwan's largest market and top investment destination outside the island, Liu said.

In his speech, Xi said the future of Taiwan lies in national reunification.

NO INTERFERENCE FROM OUTSIDE

China's reunification does not harm any country's legitimate interests, including their economic interests in Taiwan, Xi said, adding that it will only bring more development opportunities to other countries.

Over the 70 years, more and more countries and peoples have understood and supported China's cause of reunification, the president noted.

Wang said Xi's speech demonstrated the historical trend of cross-Straits relations and called for joint efforts to forge ahead for the peaceful national reunification.

A veteran who was once stationed in Kinmen, Chen joined the influx of Taiwan compatriots who found bristle business chances on the mainland.

"The direction of peaceful development is totally correct," he said. "What the two sides should do is to mitigate differences and enhance their communications."

Hsueh Ching-te, another Taiwan compatriot who runs a business in Fujian, said he looks forward to complete reunification so that "all Chinese people will live in peace, prosperity and with dignity."