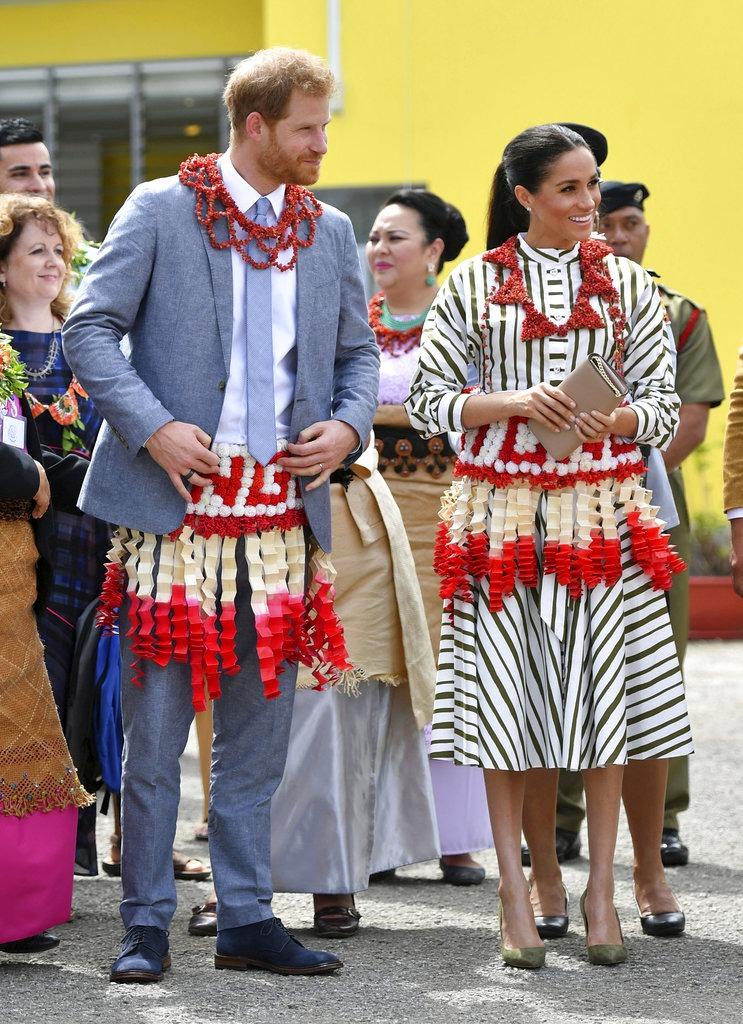 The Duke and Duchess of Sussex visit an exhibition of Tongan handicrafts, mats and tapa cloths at the Fa'onelua Convention Centre in Nuku'alofa, Tonga, Oct 26, 2018. Prince Harry and his wife Meghan are on day 11 of their 16-day tour of Australia and the South Pacific. (DOMINIC LIPINSKI / POOL PHOTO VIA AP)

Meghan, 37, who became the Duchess of Sussex when she married Britain's Prince Harry in May, donned garlands of red flowers and a handmade wrap skirt called ta'ovala, given as a traditional sign of respect, on Friday as she and Harry, who also wore the traditional attire, toured the South Pacific nation of Tonga.

Britain's Prince Harry and Meghan, Duchess of Sussex are given flower garlands at the Fa'onelua Convention Centre in Nuku'alofa, Tonga, Oct. 26, 2018. (DOMINIC LIPINSKI / POOL VIA AP)

"I think our hearts just exploded! The #DukeandDuchessOfSussex in our national dress as they inspect traditional handicrafts," Twitter user Sulia Makasini wrote on her feed.

"What a historic moment for #Tonga."

The red and white skirts, which the two wore over their normal clothes, spelled "TONGA" in flowers at the waist and won over excited crowds in the archipelago nation, and further afield.

"They're Tongan now. Love how they embrace our culture," wrote another Twitter user, Auburn Palu, from Auckland.

The country of some 170 reef-fringed tropical islands and 108,000 people is a former British colony. 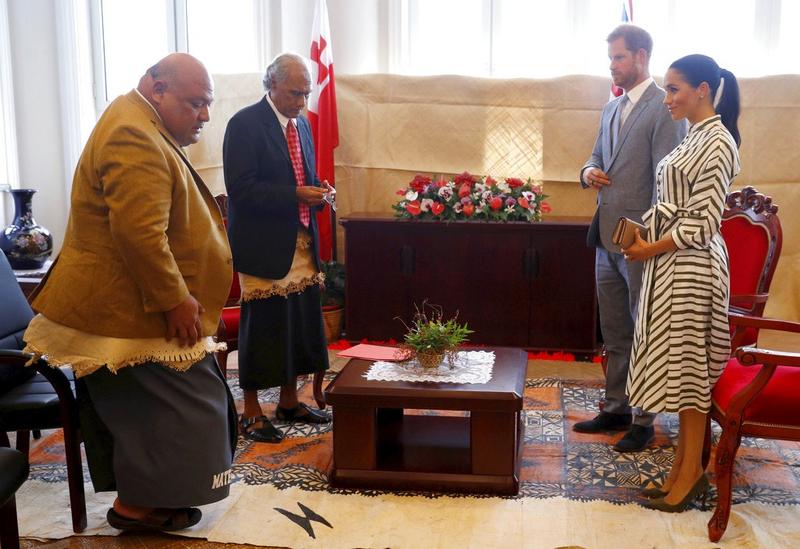 On the way in, Harry stopped to embrace a small boy holding a sign which said "Free hugs!" 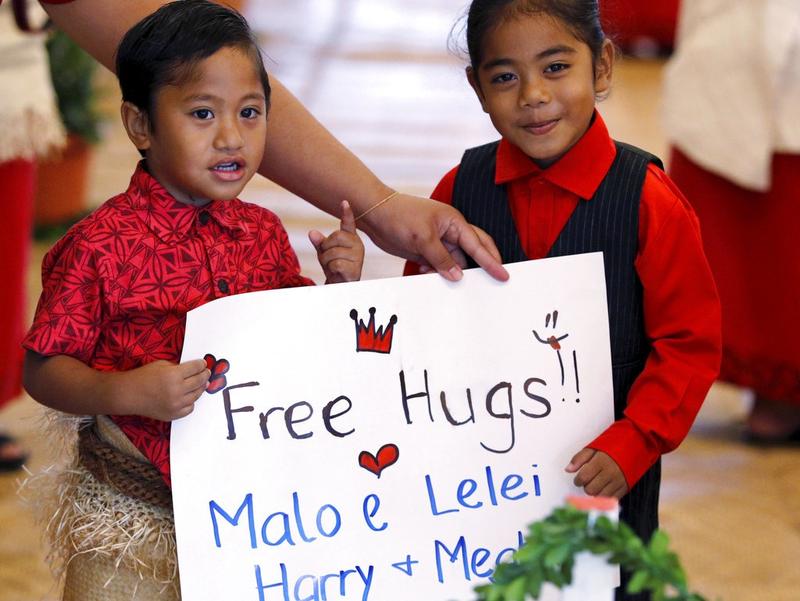 Children hold a placard as they await the arrival of Meghan, Duchess of Sussex and Prince Harry, Duke of Sussex for their meeting with Tonga Prime Minister in Nuku'alofa, Tonga, Oct 26, 2018.  (PHIL NOBEL / POOL PHOTO VIA AP)

The pair, who are expecting a child of their own in the spring, were serenaded by students at Tupou College, and called in at the Royal Palace, feted everywhere by excited crowds waving flags and signs celebrating the visit.

They laughed when boys from the college sang about mosquitoes, complete with dance moves, at a ceremony to dedicate two forest reserves on the campus, where they also inspected a caged black parrot.

Britain's Prince Harry and Meghan, Duchess of Sussex look at a parrot during a visit to Tupou College in Tonga,  Oct 26, 2018. (KIRSTY WIGGLESWORTH / AP)

School children later lined the route to the airport where the couple walked over a carpet of woven mats to their plane which left for Australia in the afternoon.

Earlier on their tour, the couple visited Fiji, where enormous crowds showed up to welcome them, and Australia where the public thronged the Sydney Opera House to catch a glimpse of Queen Elizabeth's grandson and his wife.

They return to Australia before visiting New Zealand.