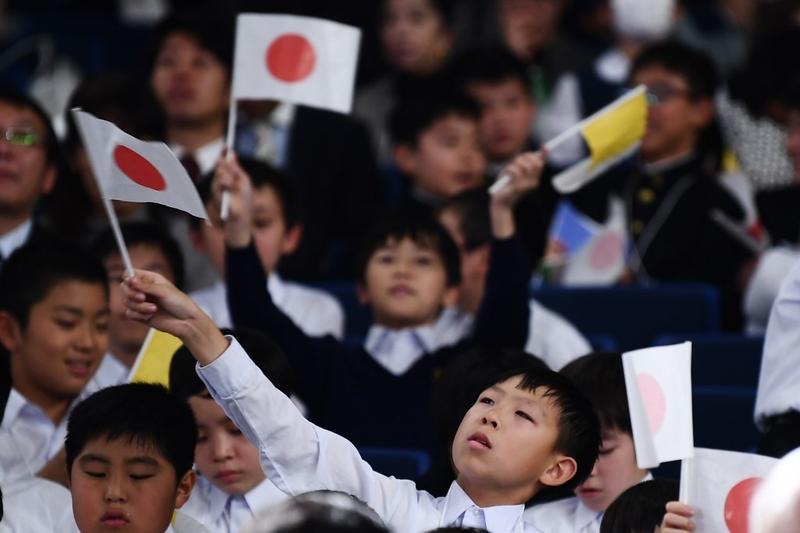 Children are pictured before the Holy Mass of Pope Francis at the Tokyo Dome in Tokyo, Nov 25, 2019. (CHARLY TRIBALLEAU / AFP)

TOKYO - A three-story building with very spacious floors houses various sections, including a play room, a kitchen, a dining space, a library-like place full of popular manga books, a consultation room and rooms where volunteers help children study on a one-on-one basis.

The facility, Adachi Base Central run by Katariba, a nonprofit organization, looks like a combination of an expensive after-school childcare center and a high-grade cram school.

It is one of seven facilities financed by the Adachi Ward Office in Tokyo that is mainly for children of families in a state of “living hardships” — in other words, relative poverty.

What shed light on the issue in Japan was the 2008 version of the Organization for Economic Cooperation and Development’s report about relative poverty problems in member countries.

According to the OECD’s website, relative poverty is defined as incomes that fall below half the median household income of a nation’s total population. The state of children living in such a household is called child poverty.

The Health, Labor and Welfare Ministry’s data in 2015, the latest available, shows Japan’s child poverty rate was 13.9%. While among single-parent households with children under 18, the poverty rate was 50.8%.

Daisuke Kaga, an official of Katariba, which started welfare programs for children in 2001, said the NPO now places importance on the lack of two “capitals”: social relationships and access to cultural goods and experiences. He said these are essential to living as working adults in an industrialized country like Japan.

Takaaki Toriyama, chief of the Adachi Ward Office’s section for measures to cope with child poverty issues, said, “Helping someone study is no more than a tool.” Though the facilities run by Katariba and another NPO, including the Adachi Base Central, are nominally places for helping children to study, their more important function is being able to give children an opportunity to have contact with adults, other than their own parents and schoolteachers, who can be role models for them.

ALSO READ: The children of Japan's single mothers have become an underclass

Tomoko Kuwata, chief of a section in charge of measures to cope with child poverty issues of the Tokyo metropolitan government’s Bureau of Social Welfare and Public Health, said not all of the section officials were able to clearly understand what child poverty is.

Thus, the section asked Tokyo Metropolitan University’s Research Center for Child and Adolescent Poverty to make a detailed report about the issue from academic perspectives in fiscal 2016.

Based on the report, the section made some changes pertaining to the provision of aid to families in living hardships, as the section officials noticed that information about various services offered by municipal governments had not sufficiently reached those who needed them.

As an improvement, the section now distributes copies of a pamphlet about aid services and programs via elementary schools, so that all parents can access the information more easily.

Before that, a large number of parents with children in relative poverty were unable to know what administrative services were available and thus were unable to access aid.

As for future tasks, Kuwata said that a larger framework may be necessary, as currently available aid and assistance may be no more than stopgap measures.

“I wonder whether it is appropriate if aid to children in relative poverty is considered on the same standard as that of public livelihood assistance for adults,” she said.

According to Katariba, it is true that there are some cases in which children do not get enough daily meals. But not all the children needing aid are in such an extreme hardship like those in child poverty in developing countries.

If the minimum level of needs for daily survival — such as housing, quantity of everyday meals, and access to elementary and junior high schools — is fulfilled, would the problems of child poverty be totally resolved?

The answer from people contacted this time — university researchers, local government officials and NPO members tackling the child poverty problems — was no.

Even if children whose minimum survival needs are narrowly fulfilled, lack of social and cultural experiences can be serious handicaps in the future.

And if these deficiencies accumulate from toddlerhood, the child may not develop things such as proper manners, common sense, IT skills and interview skills for entrance examinations and job hunting.

With such an occurrence, children of families in relative poverty may be forced to become working poor adults and a vicious cycle could begin.

If the child poverty problems are left unattended and ignored, a generational chain of poverty could occur from parents to their children through the next generations of the same family line

One of the local government officials said that no baby can choose a family to which he or she is born. But if the child poverty problems are left unattended and ignored, a generational chain of poverty could occur from parents to their children through the next generations of the same family line.

The Diet and the administration have not been unaware of these issues. In 2013, a lawmakers-sponsored bill for measures to deal with child poverty problems was passed. In June this year, the law was reviewed and some articles were revised.

One of the revisions was made to Article 12 of the law, which previously stipulated that the central and local government should make efforts to make parents of children in poverty become “self-reliant.” The revised Article 12 stipulates that the efforts should be made so that the “incomes” of parents of such children “can be increased” and the parents’ “working conditions and employment stability can be improved.”

The change is because employment is not the only goal in aid programs for the parents, said Taiyo Iseki, deputy director for policy on poverty among children of the Cabinet Office’s Office of the Director General for Policy on Cohesive Society.

“We assume many of the parents have been able to get jobs, as five years have passed since the enactment of the law on child poverty,” he said. “What is important now is whether their working conditions are sufficient.”

The Cabinet Office also shares the view that the generational chain of poverty must be prevented. Children now in poverty should be “taxpayers in the future, not recipients” of welfare programs financed with taxpayers’ money. Aid to children and parents now suffering from poverty should not be seen as something like charity. It’s an investment for the future of the nation, Iseki said.

One point on child poverty is fundamentally different from other kinds of poverty-related issues, Iseki said.

“These issues are never the children’s responsibility.”