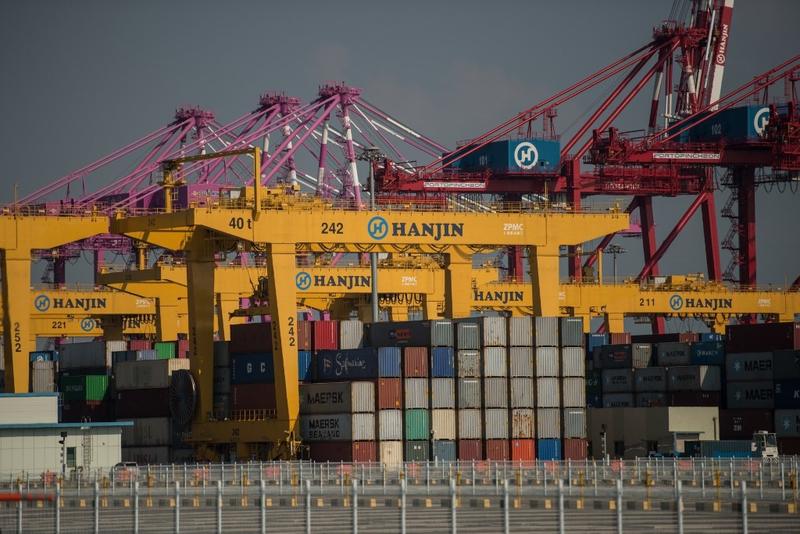 This photo taken on Sept 3, 2016 shows a general view of the Hanjin Incheon Container Terminal in Seoul, South Korea. In its latest report, the Korea Institute for International Economic Policy predicted that the US-China trade disputes could lead to a decline of US$1.36 billion in South Korea's exports. (ED JONES / AFP)

"There is a possibility for the impact ... to be much more severe than before," Finance Minister Hong Nam-ki, also deputy prime minister for economic affairs, told an emergency meeting on Monday.

Hong said the government will make all-out efforts to minimize the impact and prepare for all possible scenarios.

There is a possibility for the impact ... to be much more severe than before.

The US-China trade tensions initiated by Washington have stoked worries about a global economic slump and rattled the global financial markets, plunging the South Korean currency to new lows in years.

South Korea relies heavily on exports to fuel the growth of economy. The United States and China account for almost 40 percent of the country's total exports.

The Korea International Trade Association said in a report on May 12 that the US' imposition of tariffs on Chinese goods was estimated to cause a reduction of 0.14 percent, or US$870 million, in South Korea's exports.

According to the report, countries that rely heavily on intermediate goods exports to China, such as South Korea, Germany and Japan, were likely to take a big hit in exports.

South Korean's semiconductor, electric equipment, steel and chemical products have a high percentage of processing trade, making them likely to be badly influenced by the US-China trade disputes, according to the report.

The Korea Institute for International Economic Policy predicted in its latest report that US-China trade disputes could lead to a decline of US$1.36 billion in South Korea's exports

Meanwhile, the Korea Institute for International Economic Policy (KIEP) predicted in its latest report that the US-China trade disputes could lead to a decline of US$1.36 billion in South Korea's exports.

If the trade disputes deepen further, South Korea's exports will be affected more negatively amid a global economic slowdown, the KIEP said.

South Korea's exports kept falling for five months through April mainly due to the downturn in the business cycle of the global chip industry.

The South Korean government had previously predicted a possible export rebound in the second half of the year, but the US-China trade disputes blurred the rosy prediction.

The country's real gross domestic product (GDP), adjusted for inflation, contracted 0.3 percent in the first quarter of the year compared with the previous quarter.

In the latest flare-up of US-China trade tensions, Washington increased additional tariffs on Chinese imports worth US$200 billion from 10 percent to 25 percent earlier this month, and has threatened to raise tariffs on more Chinese imports.

In response, China has announced that it will raise additional tariffs on a range of US imports from June 1, and "will fight to the end."

ALSO READ: China can use US' own tactics to counter it

Amid widespread worries about global economic uncertainties incurred by recent tariff hikes, China has reiterated that escalating trade tensions "serve no one's interests" and will "tie down the world economy as well."

Beijing has repeatedly called on the United States, which started the row, to get back on the right track as soon as possible and meet China halfway to achieve a mutually beneficial and win-win agreement on the basis of mutual respect.