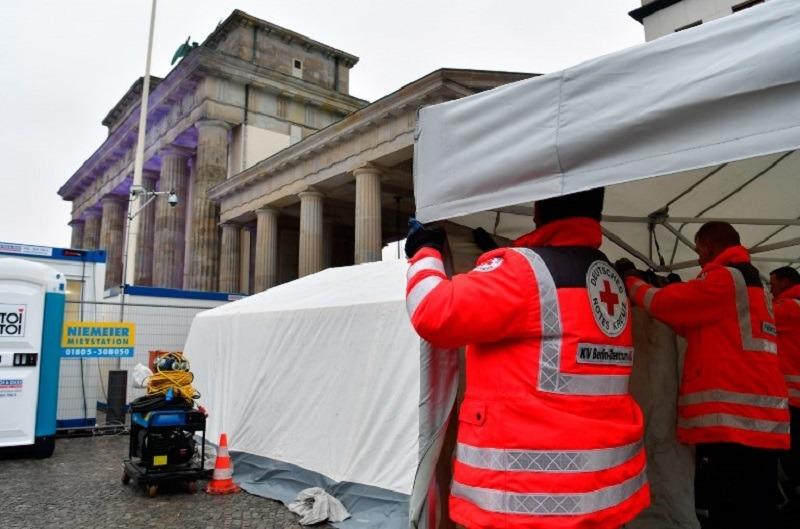 Red Cross workers set up an emergency tent in front of Berlin's landmark Brandenburg Gate where preparations are under way for New Year's Eve festivities on Dec 30, 2017. (JOHN MACDOUGALL / AFP)

YAOUNDE - A fund launched by the Red Cross aims to deliver life-saving humanitarian aid before rather than after floods, droughts and other natural hazards hit, so as to reduce damage and trauma in some of the world's most disaster-prone areas.

The "Forecast-based Action Fund", set up by the International Federation of Red Cross and Red Crescent Societies (IFRC), uses weather predictions and historical data to trigger the distribution of money when a natural disaster looms.

It means that life-saving action can now take place before anyone is in immediate danger, which will save lives and reduce the need for more costly emergency response and recovery efforts

The German government has committed 3.6 million Swiss francs (US$3.6 million) to the new forecast-based fund.

It will sit within another of the IFRC's disaster relief funds that is worth 25 million-30 million Swiss francs annually, and can draw more from that pot of money.

"It means that life-saving action can now take place before anyone is in immediate danger, which will save lives and reduce the need for more costly emergency response and recovery efforts," said Pascale Meige, the IFRC's director of disaster and crisis prevention, response and recovery.

Fifteen Red Cross/Red Crescent societies in Africa, the Americas and Asia-Pacific are readying to tap into the fund over the next two years, if needed. Other branches may also use it.

The model has been tested in communities in Peru, Togo, Uganda, Bangladesh, Mozambique and Mongolia since 2014.

"Waiting for disasters to happen should not be an option anymore," Peter Felten, head of humanitarian assistance at the German Federal Foreign Office, said in a statement.

"As soon as the forecast reaches that level of severity, the mechanism can release the funds for pre-specified early actions," he said in emailed comments.

For example, in a community-based scheme in Bangladesh, predictions that the Brahmaputra river would overflow in 2017sparked cash grants for local people who could then use the money to support their families during the emergency, he said.

The mechanism could change the way agencies tackle disasters, providing an incentive to act when the alarm bells start ringing, rather than once a disaster has struck, he noted.

Governments and aid agencies have been calling for more investment in disaster prevention for years, to cut the rising bill for helping people hit by crises.

In 2016, former UN Secretary-General Ban Ki-moon called on states to dedicate at least 1 percent of international development assistance by 2020 to reducing the risks of disasters and preparing for them.

This March, Zambian officials said the forecast-based financing model could be used as part of a national strategy for managing flood risk, and would strengthen preparedness.