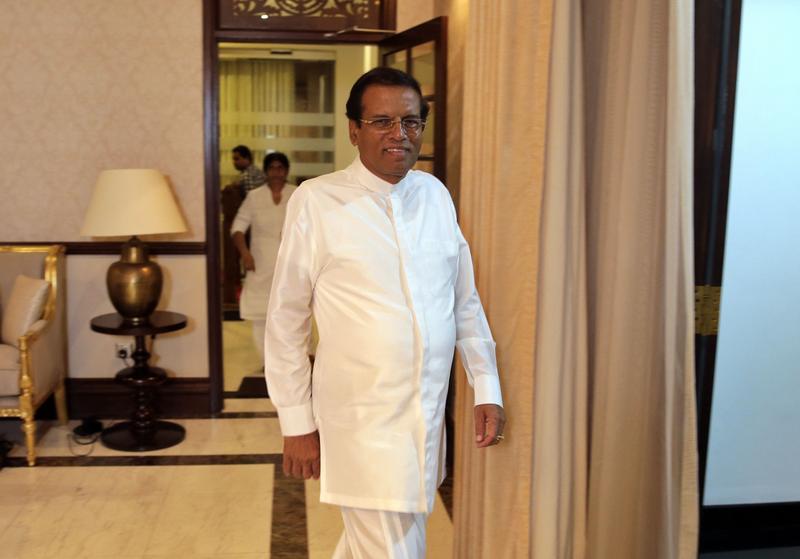 Sri Lankan President Maithripala Sirisena smiles as he leaves after an interview with the Associated Press at his residence in Colombo, Sri Lanka, May 7, 2019. (ERANGA JAYAWARDENA / AP)

COLOMBO, Sri Lanka — Sri Lanka's president says "99%" of the remaining suspects in the Easter attacks on churches and hotels have been arrested and their explosive materials seized, and it is safe for tourists to return to the Indian Ocean island nation.

"The country is in a safe position right now," President Maithripala Sirisena said in an interview with The Associated Press on Tuesday.

"Our intelligence divisions have identified how many terrorists are there and 99% of them have been arrested. One or two may have been left and they too will be arrested," he said.

Sirisena spoke hours after an interim report was submitted by a committee his office formed to examine why Sri Lankan security forces did not heed Indian intelligence information ahead of the attacks that killed more than 250 people.

Sirisena declined to discuss the report but said that "heads of security divisions have failed to take appropriate measures and failed to inform me too."

The president also said "all" of the suspects' explosives, weapons, safe houses and training centers had been found in the 16 days since the blasts rocked the island off India's southern tip.

Acting police chief CD Wickramaratne said in a statement Monday that authorities had also seized improvised explosive devices and hundreds of swords, US$140,000 in cash in bank accounts and US$40 million in assets including land, houses, vehicles and jewelry connected to the suspects.

Officials say the coordinated suicide bombings on Easter morning were carried out by Sri Lankan militants targeting churches full of people and luxury hotels in the capital, Colombo.

Since Sri Lanka's civil war ended a decade ago, the country has built a vast tourism sector that draws visitors to its beaches, wildlife and ancient temples. The dead included dozens of foreigners.

Sirisena was out of the country on a private trip to Singapore on the day of the attacks. Upon his return, he demanded the resignation of his defense secretary and chief of police.

Sirisena said Tuesday that the violence wasn't a problem specific to Sri Lanka, instead ascribing it to "global terrorism."

He said countries fighting international terrorism had voluntarily sent intelligence experts to the island who are collaborating with local intelligence units. 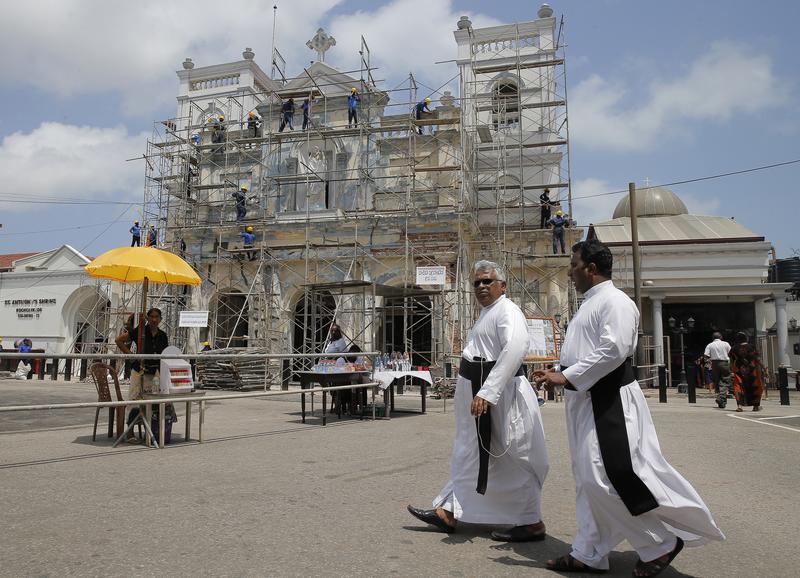 Sri Lankan Catholic priests walk outside the St Anthony's church after it was partially opened for the first time since Easter Sunday attacks, in Colombo, Sri Lanka, May 7, 2019. (ERANGA JAYAWARDENA / AP)

Officials say Zahran Hashim, a vitriolic preacher from the country's east, may have led the attackers and was one of the nine suicide bombers to die.

Two days after the bombings, the Islamic State group claimed responsibility and later released a video of Hashim and other men pledging their loyalty to IS leader Abu Bakr al-Baghdadi.

Later, al-Baghdad praised the attackers in a video that was his first public appearance in nearly five years.

Sirisena's enmity with Prime Minister Ranil Wickremesinghe and his Cabinet and a lack of communication between the two leaders is also considered a key factor in the breakdown of intelligence sharing ahead of the attacks.

Sirisena "is a big failure, but others also should have made up for it. The others have also looked at their interest above the country," said Chandra Jayaratna, a social activist and the former head of the Ceylon Chamber of Commerce.

Sirisena, who was health minister under former strongman Mahinda Rajapaksa, quit that government and teamed up with Wickremesinghe to defeat Rajapaksa in the 2015 presidential election.

However, the two leaders fell out and their rivalry became public last October when Sirisena suddenly sacked Wickremesinghe and appointed Rajapaksa as prime minister. The crisis brought the country to a standstill for seven weeks and was only resolved after a court ordered Sirisena to reinstate Wickremesinghe.

A presidential election is due by the end of the year and both Sirisena and Wickremesinghe are widely expected to run.

Sirisena has previously said the intelligence services were weakened by Wickremesinghe and his ministers who insisted that intelligence and security personnel accused of human rights violations during the civil war be investigated in line with a pledge to the United Nations' human rights council.

During and immediately after the 26-year conflict between rebels from the ethnic minority Tamil community and the Sinhalese-majority government, intelligence officials were accused of involvement in the abduction, assault and disappearance of critics, journalists and other civilians. Rajapaksa was the country's leader at the time.