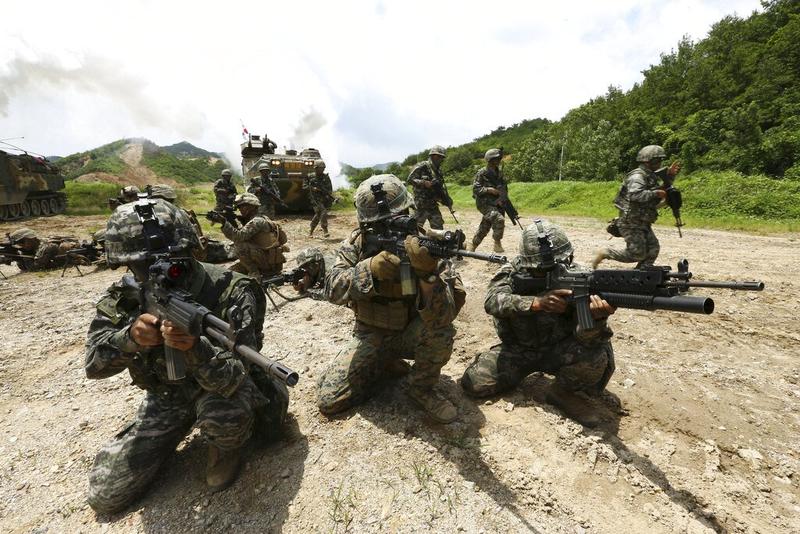 In this July 6, 2016, file photo, the Republic of Korea and US marines aim their machine guns during a joint military exercise between the two countries in Pohang, ROK. (KIM JOON-BUM / YONHAP VIA AP)

SEOUL/WASHINGTON — The United States looks set to break a promise not to hold military exercises with the Republic of Korea (ROK), putting talks aimed at getting the Democratic People's Republic of Korea (DPRK) to abandon its nuclear weapons at risk, DPRK's Foreign Ministry said on Tuesday.

The United States' pattern of "unilaterally reneging on its commitments" is leading Pyongyang to reconsider its own commitments to discontinue tests of nuclear weapons and intercontinental ballistic missiles (ICBMs), the ministry said in a pair of statements released through state news agency KCNA.

US President Donald Trump revitalized efforts to persuade the DPRK to give up its nuclear weapons last month when he arranged a spur-of-the-moment meeting with DPRK leader Kim Jong-un on the border between the DPRK and ROK.

It is crystal clear that it is an actual drill and a rehearsal of war aimed at militarily occupying our Republic by surprise attack.

Trump said they had agreed to resume so-called working-level talks, stalled since their second summit in February collapsed. The negotiations are expected in coming weeks.

US Secretary of State Mike Pompeo said Monday in a radio interview on "The Sean Hannity Show" that he hoped both the DPRK and the United States could "be a little more creative" when the two sides restart talks, but did not say when the negotiations would resume.

"I hope the North Koreans will come to the table with ideas that they didn't have the first time," Pompeo said. "We hope we can be a little more creative too."

But a DPRK foreign ministry spokesman cast doubt on that, saying the United States and ROK were pressing ahead with exercises, called Dong Maeng, this summer, which he called a "rehearsal for war".

"We will formulate our decision on the opening of the DPRK-US working-level talks, while keeping watch over the US move hereafter," the spokesman said

The exercises are expected in August.

The DPRK has for years denounced military exercises between the United States and ROK, but in recent months has increased its criticism as talks with Washington and Seoul stalled.

"It is crystal clear that it is an actual drill and a rehearsal of war aimed at militarily occupying our Republic by surprise attack," the DPRK spokesman said in a separate statement, adding that Trump has reaffirmed at last month's meeting with Kim that the exercises would be halted.

Trump, in his first meeting with Kim in Singapore in June last year, said he would stop exercises, after the two leaders agreed to work towards the denuclearization of the Korean Peninsula and to improve ties.

While the main annual ROK-US exercises have been stopped, they still hold smaller drills.

"Readiness remains the number one priority for USFK," said Jacqueline Leeker, a spokeswoman for US Forces Korea (USFK). "As a matter of standard operating procedure, and in order to preserve space for diplomacy to work, we do not discuss any planned training or exercises publicly."

She said US and ROK troops continued to train together, but had adjusted the size, scope, number and timing of exercises in order to "harmonize" training programs with diplomatic efforts.

An official at ROK's ministry of defense said it did not have immediate comment, but Seoul officials have previously said the drills are defensive in nature.

Since the Singapore summit, the DPRK has not tested any nuclear weapons or intercontinental ballistic missiles, though it tested new short-range missiles in May.

The United States' decision to forge ahead with drills less than a month after Trump and Kim last met is "clearly a breach" of the two leaders' agreements made in Singapore last year, and is an "an undisguised pressure" on the DPRK, the foreign ministry spokesman said.

"With the US unilaterally reneging on its commitments, we are gradually losing our justifications to follow through on the commitments we made with the US as well," he said.