Bolton: Trump open to a third summit with DPRK's Kim 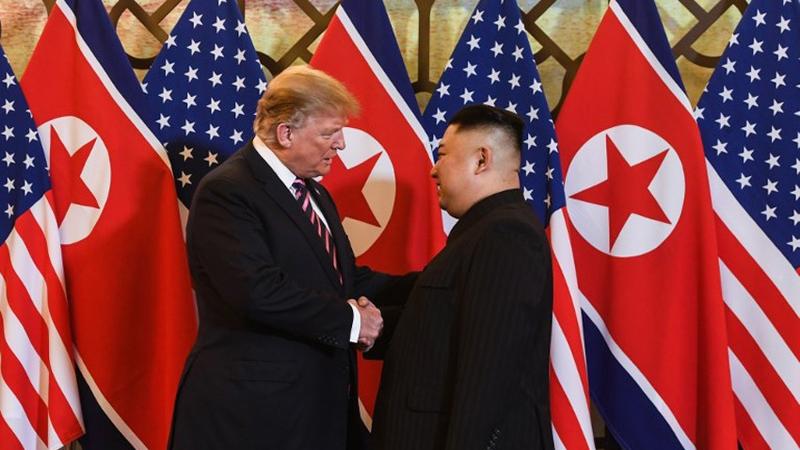 US President Donald Trump (left) shakes hands with leader of the Democratic People’s Republic of Korea, Kim Jong-un, before a meeting at the Sofitel Legend Metropole hotel in Hanoi, Feb 27, 2019. (SAUL LOEB / AFP)

WASHINGTON — US President Donald Trump is open to a third summit with Kim Jong-un, top leader of the Democratic People's Republic of Korea (DPRK), US National Security Adviser John Bolton said on Sunday.

In an interview with ABC on Sunday, Bolton said that President Trump had invested a lot of time in trying to develop a personal relationship with Kim, and Trump is confident in that relationship.

Bolton said Trump "said he's open to a third summit," but "none has been scheduled, and some time may have to go by"

"He said he's open to a third summit, none has been scheduled, and some time may have to go by," Bolton added.

When asked about some reports on imagery analysis of activities in the DPRK, Bolton said that he would not speculate on what that particular commercial satellite picture shows.

Bolton also noted that Washington had not asked Pyongyang about the images of DPRK's rocket launch facility, while he revealed that he would speak with his Republic of Korea (ROK)'s counterpart on this matter Monday morning.

US media widely reported that the DPRK appeared to have started "rapid rebuilding" of the long-range rocket site at Tongchang-ri Launch Facility, citing an imagery analysis from the Center for Strategic and International Studies, a Washington-based think tank.

"I would be very disappointed if that were happening. It's a very early report ... We'll take a look," Trump told reporters on Wednesday regarding the imagery analysis.

Bolton earlier said it was premature to make a judgment on the reports of the activities of DPRK rocket launch site.

Speaking on condition of anonymity, a senior State Department official on Thursday told the press that Tongchang-ri facility is "not a critical part" of DPRK's nuclear infrastructure at this point, and the United States has not "reached any specific conclusion" on those reports.

The official confirmed that Washington would seek clarifications on the purposes of those activities.

Trump and Kim held their second summit in Hanoi, Vietnam on Feb 27-28, without reaching an agreement.

Trump and Secretary of State Mike Pompeo also repeatedly expressed that Washington would continue the conversation with Pyongyang.