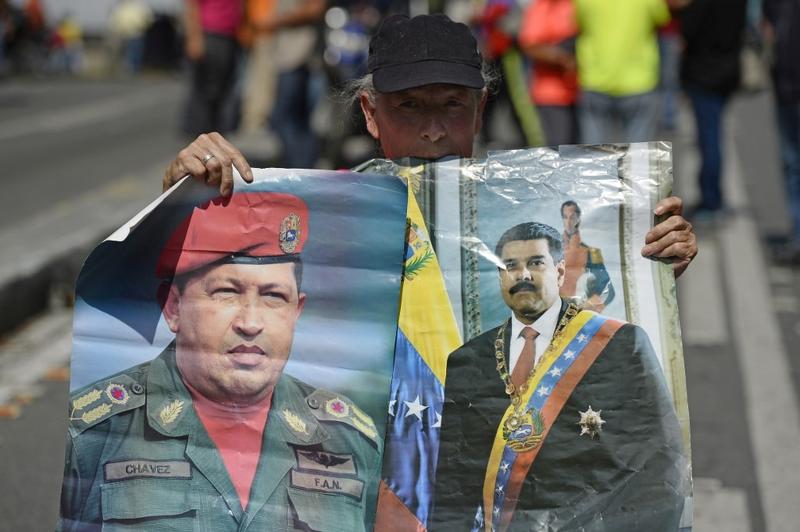 A supporter of Venezuelan President Nicolas Maduro displays pictures of late President Hugo Chavez (left) and Maduro during a rally in the surroundings of Miraflores Presidential Palace in Caracas on April 30, 2019. (MATIAS DELACROIX / AFP)

CARACAS - Venezuelan President Nicolas Maduro said on Tuesday via twitter that military commanders from all regions and defense areas of the country have "expressed their loyalty to the people, the Constitution and the country."

Maduro also called for "the maximum popular mobilization to ensure the victory of peace."

Defense Minister Vladimir Padrino Lopez said "all military units deployed in the eight regions of integral defense report normality in their barracks and military bases, under the command of their natural commanders"

He said that "all military units deployed in the eight regions of integral defense report normality in their barracks and military bases, under the command of their natural commanders."

Vice President Delcy Rodriguez also wrote on Twitter that "The US government shamelessly and immorally acknowledges its authorship in this criminal attempted coup in Venezuela."

Rodriguez referred to the message on Twitter sent earlier by US vice president Mike Pence, who openly expressed his support to Venezuelan opposition leader Juan Guaido.

"To ... all the freedom-loving people of Venezuela who are taking to the streets today in operation freedom, we are with you! America will stand with you until freedom & democracy are restored," said Pence.

Local media reported that Guaido showed up early Tuesday morning along with some military personnel outside the La Carlota aviation military base, located in Altamira in the east of Caracas.

He called on civilians and military to act against the government and urged Maduro to step down.

He also tweeted that "the end of the usurpation began, and at this moment I am meeting with the main military units of our armed forces, beginning the final phase of Operation Freedom."

Later, president of the National Constituent Assembly (ANC) Diosdado Cabello said that "at this moment the situation is in absolute tranquility in all of Venezuela, including Caracas."

Cabello called on the Venezuelan people to "defend" the government of President Nicolas Maduro.