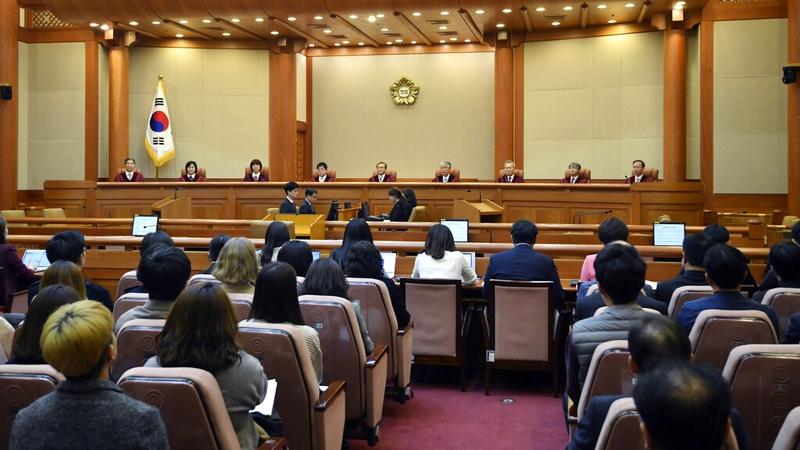 South Korea's Constitutional Court chief judge Yoo Nam-seok (center) and other judges sit for the ruling on decriminalization of abortion at the court in Seoul, April 11, 2019. (JUNG YEON-JE / POOL PHOTO VIA AP)

SEOUL, South Korea — In a major reversal, South Korea's Constitutional Court on Thursday ordered the easing of the country's decades-old ban on most abortions, one of the strictest in the developed world.

Abortions have been largely illegal in South Korea since 1953, though convictions for violating the restrictions are rare. Still, the illegality of abortions forces women to seek out unauthorized and often expensive procedures to end their pregnancies, creating a social stigma that makes them feel like criminals.

The court's nine-justice panel said that the parliament must map out legislation to ease the current regulations by the end of 2020. It said the current abortion law was incompatible with the constitution and would be repealed if parliament fails to come up with new legislation by then.

The ruling is final and cannot be appealed, court officials said, but current regulations will remain in effect until they are replaced or repealed.

An easing of the law could open up the door to more abortions for social and economic reasons. Current exceptions to the law only allow abortions when a woman is pregnant through rape or incest, when a pregnancy seriously jeopardizes her health, or when she or her male partner has certain diseases.

A woman in South Korea can be punished with up to one year in prison for having an illegal abortion, and a doctor can get up to two years in prison for performing an unauthorized abortion.

Thursday's verdict was a response to an appeal filed in February 2017 by an obstetrician charged with carrying out about 70 unauthorized abortions from 2013-2017 at the request or approval of pregnant women.

Most other countries in the 36-member Organization for Economic Cooperation and Development, the so-called most developed countries, allow abortions for broad social and economic reasons. South Korea is one of only five OECD member states that don't allow such abortions, according to the Ministry of Gender Equality and Family.

"Today's ruling is a major step forward for the human rights of women and girls in South Korea," Roseann Rife, Amnesty International's East Asia Research Director said in a statement.

The South Korean public has been sharply split over the abortion law. There have been heated panel discussions on TV and internet programs; activists, both for and against, have for months stood with placards near the court. Dozens gathered on Thursday. 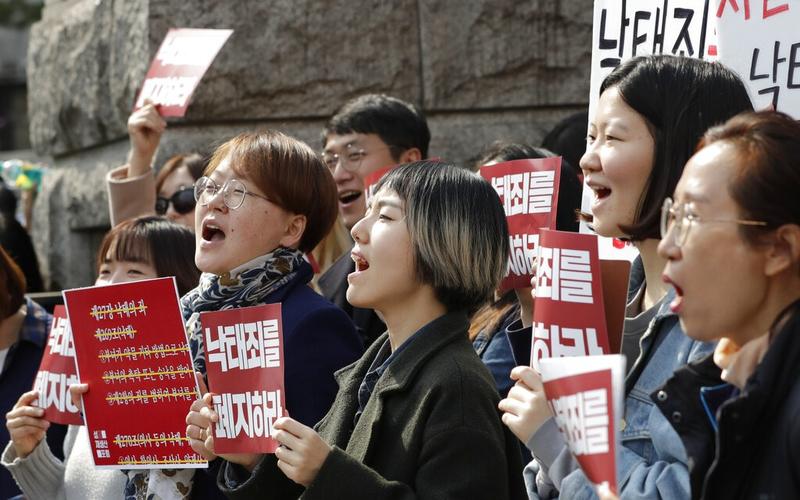 Protesters celebrate after listening to a judgment during a rally demanding the abolition of abortion law outside of the Constitutional Court in Seoul, South Korea, April 11, 2019. (LEE JIN-MAN / AP)

A group of women's rights activists shouted "Abolish the anti-abortion law" near the court's entrance earlier Thursday. Several meters away from them were 20 anti-abortion activists, who held placards carrying images of fetuses and messages such as "Who can speak for me?" and "Don't kill me, please."

Ham Sooyeon, leader of the nonprofit Korea Pro-Life group, said before the ruling that rather than easing the abortion restrictions, South Korea should find ways to improve support systems for poor, single mothers and their children and change public views on single mothers.

It's not clear exactly how many abortions take place in South Korea. In a recent survey of 10,000 women aged between 15 and 44, about 7.6%, or 756 respondents, said they had undergone an abortion. They mostly cited worries about difficulty in continuing their studies and jobs, economic problems and a desire to wait, according to the survey conducted by the state-run Korea Institute for Health and Social Affairs. The survey had a margin of error of plus or minus 1 percentage point.

Though abortions are illegal, only a handful of women and doctors are prosecuted each year in South Korea. According to government records, there were only 15 indictments on abortion-related cases in 2013.

ALSO READ: Study: Nearly half of abortions worldwide are unsafe

Activists say most abortions in South Korea, whether lawful or unlawful, take place at registered hospitals. But it's not easy to find hospitals offering illegal abortions and they usually charge high prices because the procedures are not covered by medical insurance programs.