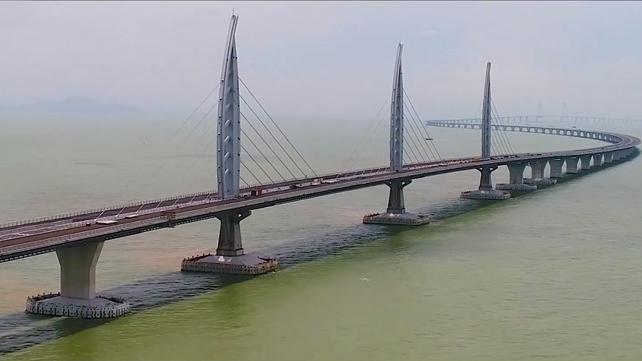 Construction of the Guangdong-Hong Kong-Macao Greater Bay Area will help further improve the livelihoods of the people in the area and propel the country's comprehensive opening-up in the new era, a senior official said on Sunday.

Guangdong will seek expanded cooperation and more discussion with Hong Kong and Macao in building, operating and managing the infrastructural projects that link Guangdong with the two Chinese SARs

Constructing the Greater Bay Area is a development strategy of the country, proposed and promoted by President Xi Jinping, said Huang Kunming, a member of the Political Bureau of the Communist Party of China Central Committee.

It will further demonstrate to the world China's systemic advantages and further enrich the content of the country's "one country, two systems" policy, Huang, also head of the Publicity Department of the CPC Central Committee, said at the opening ceremony of the first Guangdong-Hong Kong-Macao Greater Bay Area Media Summit held in Guangzhou, Guangdong province.

Guangdong, one of the early windows with a view to China's reform and opening-up, would not have been able to achieve its current remarkable economic results without the help and support from Hong Kong and Macao, he said.

And the prosperity and sustainable economic growth of the two Chinese special administrative regions also required the support from Guangdong in the previous four decades, he added.

He urged media from the three regions to expand their cooperation and exchanges, to closely monitor the development of the Greater Bay Area and to create a sound public opinion environment for the area's construction in the coming months.

Li Xi, secretary of the Guangdong Provincial Committee of the CPC, said Guangdong will further expand its exchanges and cooperation with Hong Kong and Macao to construct the Bay Area and achieve harmonious and coordinated development among cities in the three regions.

"Guangdong will seek expanded cooperation and more discussion with Hong Kong and Macao in building, operating and managing the infrastructural projects that link Guangdong with the two Chinese SARs, including the Hong Kong-Zhuhai-Macao Bridge and other large-scale projects," Li said.

Hong Kong Chief Executive Carrie Lam Cheng Yuet-ngor said the construction of the Bay Area has a myriad of media topics as the area will be driven by innovation. Furthermore, Lam said the area is home to some 70 million people, all with expectations of better lives.

"The three governments will make good use of their own respective advantages and coordinate development to bring better lives to their people. And this dynamic process of development will offer endless sources of reporting materials for the media," she said.

As one of the country's economic powerhouses and one of the Chinese areas that opened widest to the outside world, the Bay Area includes the cities of Guangzhou, Shenzhen, Zhuhai, Foshan, Dongguan, Zhongshan, Huizhou, Jiangmen and Zhaoqing in Guangdong province, and the SARs of Hong Kong and Macao.

The area occupies less than 1 percent of China's land area but more than 5 percent of its population. The area's GDP reached about one trillion yuan (US$147 billion) in 2018.