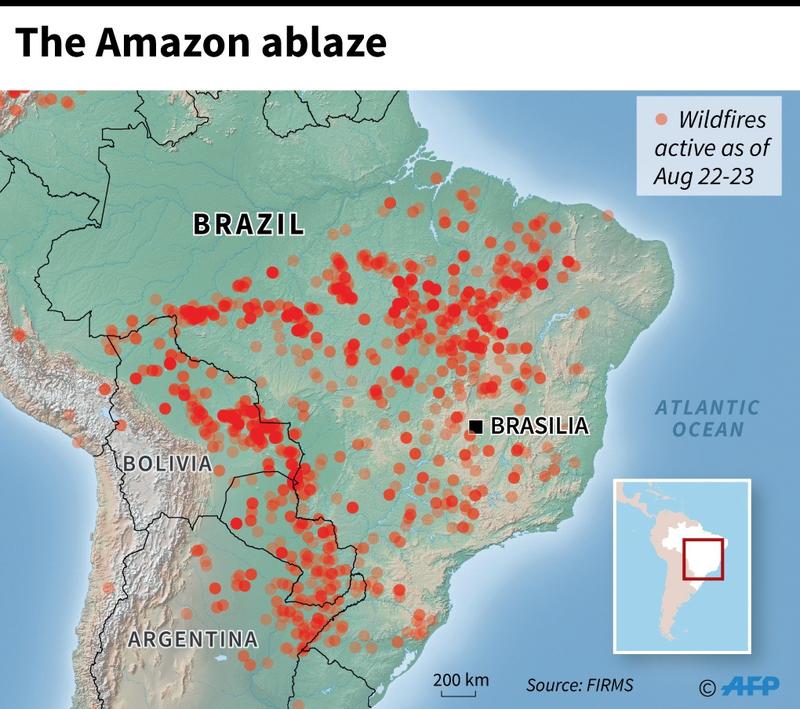 BRASILIA/SAO PAULO — Amid growing international criticism over the wildfires raging through the Amazon, Brazilian President Jair Bolsonaro on Thursday admitted farmers could be illegally setting the rainforest ablaze but told foreign powers not to interfere.

French President Emmanuel Macron and United Nations Secretary General António Guterres both took to Twitter to express concern about the fires that have reached a record number this year, devastating vast swathes of forest considered a vital bulwark against climate change.

Bolsonaro said that "countries that send money here ... send it with the aim of interfering with our sovereignty", despite acknowledging earlier that Brazil lacked the resources to control the fires

Bolsonaro responded angrily to what he regarded as meddling.

"These countries that send money here, they don't send it out of charity. ... They send it with the aim of interfering with our sovereignty," he said in a Facebook Live broadcast.

But earlier on Thursday, he said that Brazil alone lacked the resources to control the fires.

"The Amazon is bigger than Europe, how will you fight criminal fires in such an area?" he asked reporters as he left the presidential residence. "We do not have the resources for that."

Fires in the Amazon have surged 83% so far this year compared with the same period a year earlier, government figures show.

Although fires are a regular and natural occurrence during the dry season at this time of year, environmentalists blamed the sharp rise on farmers setting the forest alight to clear land for pasture.

Farmers may have had at least tacit encouragement from the firebrand right-wing president, who took power in January.

Bolsonaro has repeatedly said he believes Brazil should open the Amazon up to business interests, to allow mining, agricultural and logging companies to exploit its natural resources.

On Wednesday, he blamed non-governmental organizations for setting the fires, without providing evidence. He appeared to row back on Thursday, when he said for the first time that farmers could be behind the fires.

Macron took to Twitter to call the Amazon fires an "international crisis" that should be discussed by the G7 summit that will begin on Saturday in Biarritz, France. The Group of Seven rich countries does not include Brazil.

Guterres said he was "deeply concerned" by the fires, adding, "We cannot afford more damage to a major source of oxygen and biodiversity." 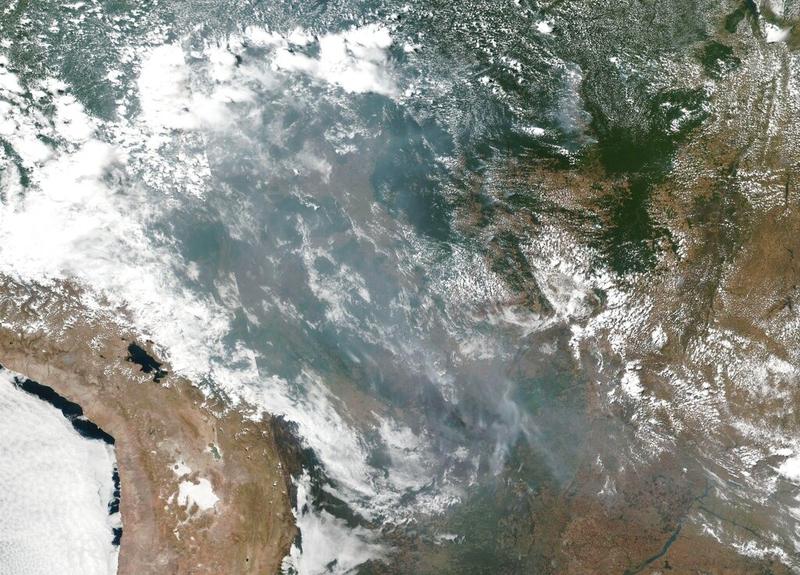 This satellite image provided by NASA shows the wildfires in Brazil on Aug 20, 2019. (PHOTO / NASA VIA AP)

Federal prosecutors in Brazil said they were investigating a spike in deforestation and wildfires raging in the Amazon state of Pará to determine whether there has been reduced monitoring and enforcement of environmental protections.

Prosecutors said they would look into an ad that they said was published in a local newspaper encouraging farmers to participate in a "Fire Day," in which they would burn large areas of forest "to show Bolsonaro their willingness to work."

Colombia, home to part of the northern Amazon, on Thursday offered its support in the fight to protect the forest.

"Colombian authorities are already working to contain the propagation of these fires toward Colombian territory and we are willing to collaborate with our neighbors in this common cause," the Foreign Ministry said in a statement.

Fires in the Amazon have surged 83% so far this year compared with the same period a year earlier, government figures show

Brazil is facing growing international criticism over its handling of the Amazon, 60% of which lies in the country.

Earlier this month, Norway and Germany suspended funding for projects to curb deforestation in Brazil after becoming alarmed by changes to the way projects were selected under Bolsonaro.

At the time, when asked about the loss of German funding, Bolsonaro said, "Brazil does not need that."

Others were less sanguine.

Brazil's lower house speaker, Rodrigo Maia, said on Twitter he would create "an external committee" to monitor the burning of the rainforest, and he vowed to form a group "to evaluate the situation and propose solutions to the government."

The Bishops Conference for Latin America expressed concern about the "tragedy," and on Thursday called on countries to take immediate action to protect the rainforest and nearby communities.

"We urge the governments of the Amazon countries, especially Brazil and Bolivia, the United Nations and the international community to take serious measures to save the world's lungs," it said.

Wildfires are also raging in Bolivia, where officials estimate that an area the size of the US state of Delaware has burned in recent days.