Pakistani PM urges India to give peace a chance 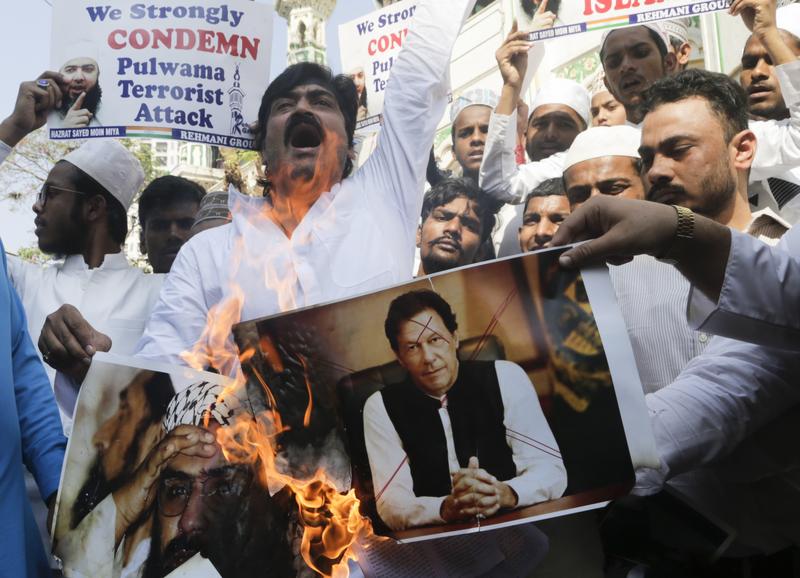 In this Feb 15, 2019 file photo, Indian muslims burn posters of Pakistani prime minister Imran Khan, center, and Jaish-e-Mohammed leader Masood Azhar, during a protest against Thursday's attack on a paramilitary convoy in Kashmir that killed at least 40, in Mumbai, India. (RAJANISH KAKADE / AP)

PM Imran Khan pledged cooperation in the investigation into the suicide attack in India, but rejected Pakistan's involvement

The call was made amid heightened tensions between the two neighbors following the recent suicide attack in the Indian-controlled Kashmir that killed over 40 Indian soldiers.

Earlier addressing the nation, Khan promised that his government would take action if India shared "actionable evidence" to prove that Pakistani soil was used in the attack on the Indian Central Reserve Police Force.

ALSO READ: Pakistan PM authorizes use of force in case of Indian attack

He had also pledged cooperation in the investigation into the incident, but rejected Pakistan's involvement.

Indian-controlled Kashmir Sunday observed a shutdown to protest arrests of political activists and move of legally abrogating a law - Article 35 A of Indian constitution - that confers special status to the region.

The strike call was given by the region's separatist groups under the leadership Joint Resistance Leadership (JRL) condemning arrests and fearing tampering with Article 35 A would change the demography of the Muslim- majority region.