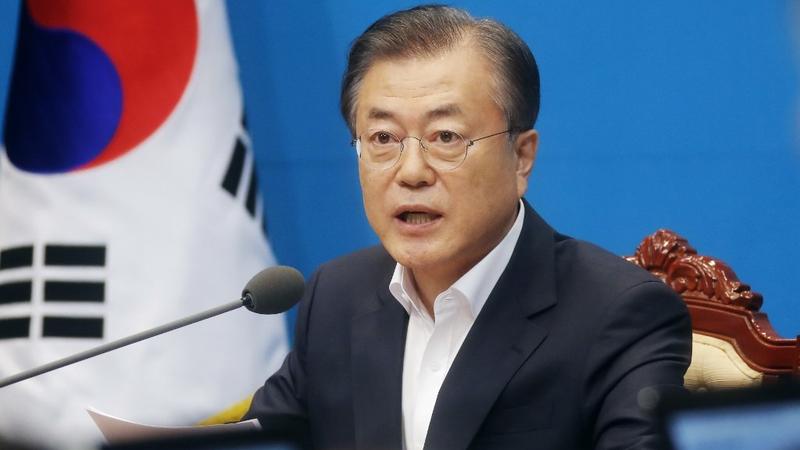 South Korean President Moon Jae-in speaks during an emergency cabinet meeting at the presidential Blue House in Seoul on Aug 2, 2019. Moon said on Aug 8, 2019, that Japan imposing tighter export curbs against South Korea will undermine Japan's international credibility for using its industrial advantage as a weapon against another country.  (YONHAP / AFP)

SEOUL/TOKYO — South Korean President Moon Jae-in said Thursday that uncertainty would last over Japan's export curbs on South Korea despite Tokyo's first approval of exporting a chip material to Seoul since imposing tighter curbs of such materials in early July.

Moon said during a meeting of the presidential National Economic Advisory Council that despite the first approval by Japan, what was unchanged was a fact that "uncertainty is still alive."

Moon also said tighter curbs would undermine Japan's international credibility and accused Tokyo of using its industrial advantage as a weapon against another country, Reuters reports.

"The measures so far undermine the trust of the free trade order and the international division of labor," Moon said, according to Reuters. "Even if there are any gains, it will be short-lived. In the end it is a game without winners, where everyone, including Japan itself, becomes a victim.

Moon's comments came after Japan earlier in the day permitted the shipment of extreme ultraviolet (EUV) photoresist to South Korea, according to the presidential Blue House.

Industry Minister Hiroshige Seko said Japan does not usually announce each export approval, but did so this time after South Korea described Japan's recent curbs as an "embargo" on shipments, according to Reuters.

He was quick to add that Tokyo would expand the curbs beyond the three specialized chemicals - fluorinated polyimides, photoresists and hydrogen fluouride - if there were any cases of "improper" use, Reuters added. Some of the chemicals, which are used to make smartphone displays and chips, can also be used in weapons.

The approval and subsequent warning illustrate how Tokyo is upping the ante in the diplomatic row while at the same time is unwilling to unilaterally stop exports to South Korea.

On Wednesday, Japan promulgated last week its decision to remove South Korea from its “white list” of trusted trading partners, but it did not impose additional curbs on materials exported to South Korea.

Moon said it needed to see how Japan would act, but he noted that his government had been prepared for the worse-case scenario right after Japan's tighter regulations on the three materials last month.

The president vowed to take Japan's export restrictions as an opportunity to reduce import dependence on Japan and expand the development of homegrown parts and materials, while continuing diplomatic efforts to resolve the trade issue with Japan.

Moon reiterated his position that Japan's action was an "economic retaliation" against the South Korean top court's rulings that ordered some of Japanese companies to compensate the South Korean victims who were forced into hard labor without pay during the 1910-45 Japanese colonization of the Korean Peninsula.

Japan says the matter was settled by a 1965 treaty normalizing bilateral ties.

South Korea was scheduled to take a call on its plan to drop Japan from a similar "white list" of countries on Thursday, but trade ministry officials said the plan had been put off until further discussions, according to Reuters.

Given the curbs in place, Japan's approval to export the three materials could take up to 90 days, slowing shipments.

But it remains unclear if the initial approval from Tokyo signals a breakthrough in trade relations.

"They approved only one out of a number of items, and they said they would approve exports for pure civilian purposes," a South Korean senior trade ministry official told Reuters.

"It doesn't mean that uncertainties have been completely removed for the other items," said a presidential official, according to Reuters.

(With inputs from Reuters)