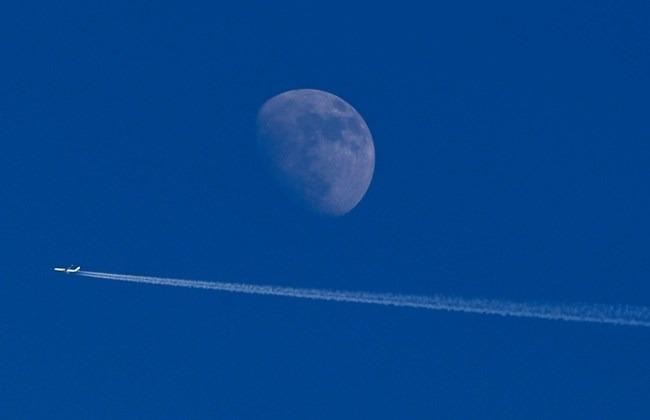 A passenger airliner flies past the moon in the capital city Beijing, Jan 17, 2019. (ANDY WONG / AP)

Spokeswoman Hua Chunying made the remarks in response to a query about a report released by Defense Intelligence Agency (DIA) of the United States on Monday, which was titled "Challenges to Security in Space."

While saying that comments in the DIA report were haphazard and groundless, Hua stressed outer space is an international common, rather than the private property of any particular country, especially the United States.

She mentioned the recent negative momentums that have occurred in outer space security, stating that "it is particularly alarming and worth noticing that the United States has characterized outer space as a warfare territory and announced forging an independent outer space force, in a bid to continue its combat exercises."

These moves have led to a growing danger of weaponization in outer space and turning it into a battlefield, Hua cautioned.

"Despite this, the United States is constantly hyping up so-called outer space security threats from other countries," Hua said, describing it as "the self-deceiving trick (of the US) that is essentially an excuse for assembling air forces and developing advanced weapons in space."

"If the US side really cares about the outer space security, it should work together with China in participating in arms control in outer space and make due contribution to safeguarding security there, rather than the other way around," Hua added.