By He Shusi / staff writer 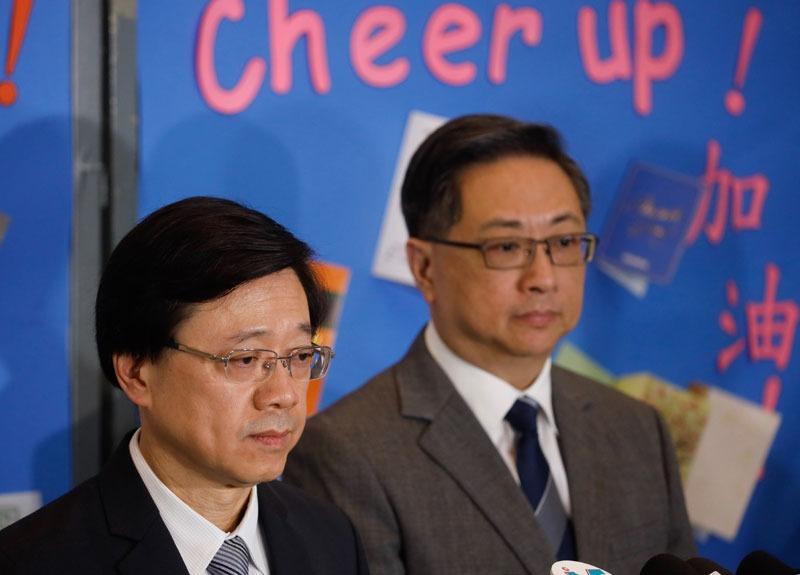 Cheung expressed concern after demonstrators surrounded the police headquarters for the second time in a week, blocking nearby roads and interrupting a police officer who was on his way to work.

He said the police handled its challenges with the utmost tolerance.

The chief secretary urged demonstrators to express their views lawfully and peacefully, adding the government respects the public’s right to procession and assembly as well as the freedom of expression.

Security chief Lee Ka-chiu called demonstrators’ behavior a “fragrant provocation”, which has gone far beyond the bottom line of freedom of speech and expression

Meeting the press in the afternoon, Lee called demonstrators’ behavior a “fragrant provocation”, which has gone far beyond the bottom line of freedom of speech and expression.

Some protestors were seen blocking all entrances of the headquarters complex with metal barriers, and throwing eggs and bottles at the building’s walls to express their dissatisfaction with the special administrative region government’s handling of the now-suspended extradition bill. Some also flashed laser pointers at police officers’ eyes.

Lee acknowledged the officers’ restrained attitude when faced with such provocative behaviors and expressed his gratitude to them.

He said police will take proper actions to handle behaviors that pose danger at public order and security.

“No matter how dissatisfied one feel about the SAR government, please don't vent the anger to the police,” Lee said.

The restrained attitude of the police does not mean there will be no consequences for unlawful acts, Lo said.

According to Lo, one person was arrested for assaulting a police officer during the siege outside the headquarters.