Cities around the world turn off lights to mark Earth Hour 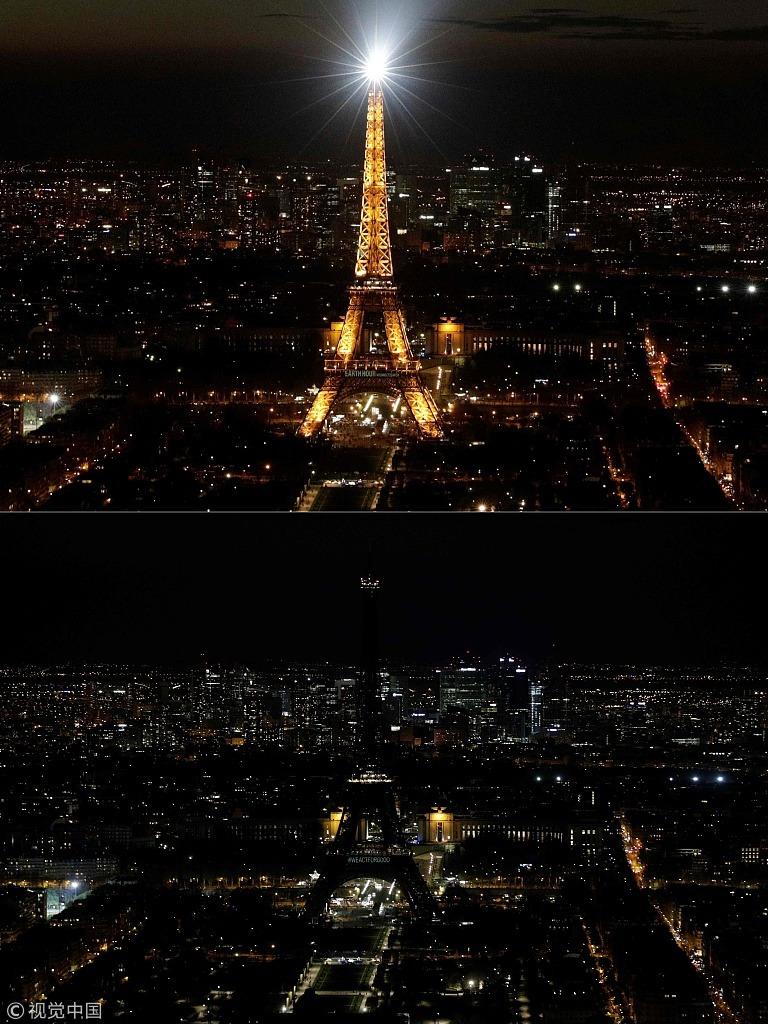 This combination of pictures shows the Eiffel Tower, illuminated (up), in Paris and switched-off (down) during the a Earth Hour, March 30, 2019. (PHOTO / VCG)

Cities around the world were marking Earth Hour on Saturday by turning off lights at 8:30 pm local time in a call for global action on climate change.

Earth Hour, spearheaded by the World Wildlife Fund, calls for greater awareness and more sparing use of resources, especially fossil fuels that produce carbon gases and lead to global warming. Beginning in Sydney in 2007, Earth Hour has spread to more than 180 countries and regions, with tens of millions of people joining in.

Earth Hour, spearheaded by the World Wildlife Fund, calls for greater awareness and more sparing use of resources, especially fossil fuels that produce carbon gases and lead to global warming

Bell Tower as well as Yinli Plaza in Shenzhen.

In Hong Kong, major buildings along Victoria Harbour turned off their non-essential lights and the city's popular tourist attraction known as the Symphony of Lights was canceled.

Over 3,000 corporations in Hong Kong signed up for Earth Hour 2019, according to the WWF Hong Kong website. Iconic skyscrapers including the Bank of China Tower and the HSBC Building in Central, the city's major business district, switched off their lights in response to the global movement.

The City of Lights also turned off the Eiffel Tower's nightly twinkle to mark Earth Hour. Paris Mayor Anne Hidalgo dimmed the lights Saturday on the city's most famous monument for an hour.

In Italy, public buildings and historical monuments in 400 cities participated in Earth Hour. Lights were also switched off at St. Peter's Basilica at the Vatican.

Some of most emblematic architectural treasures in Spain participated, including the Alhambra palace in Granada and Barcelona's La Sagrada Familia basilica.

In coal-reliant Poland, top tourist sites also turned off their lights when local clocks hit 8:30 pm. In the country's capital city, Warsaw, the spired landmark Palace of Culture and Science turned off its night illumination, along with some churches and Old Town walls. 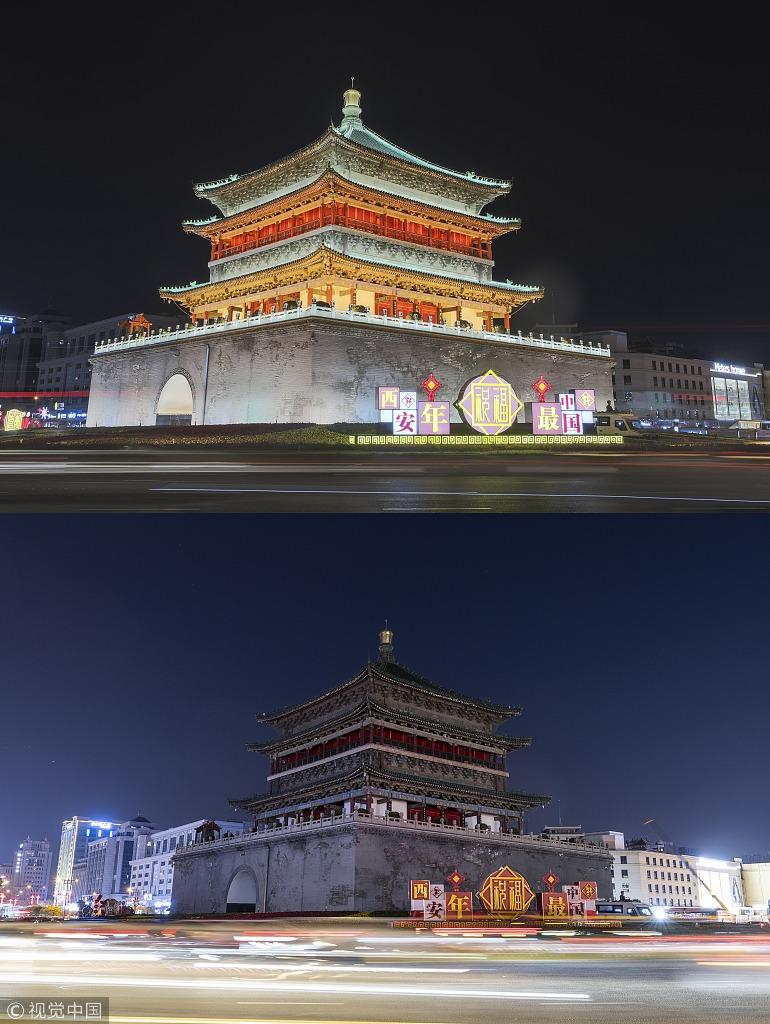 A combination picture shows the Bell Tower before (top) and during Earth Hour in Xi’an, China. (PHOTO / VCG)

Lights were also switched off in several landmarks in the Greek capital. The Acropolis, Athens City Hall and Lycabettus Hill, towering above the Athens center, went dark and the Parliament building joined in. However, the Athens mayor's calls for the people to join in by turning off the lights in their houses went mostly unheeded. 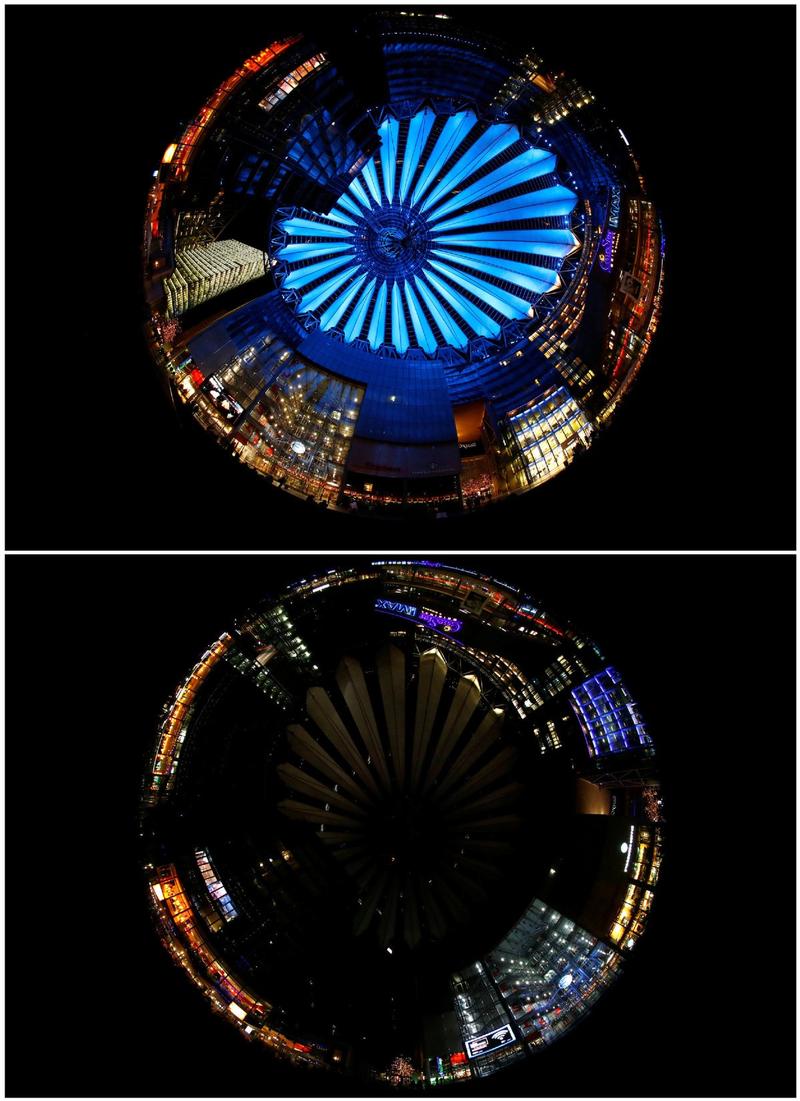 A combination picture shows Sony Center at the Potsdamer Square before (top) and during Earth Hour in Berlin, Germany, March 30, 2019. (PHOTO / AP) 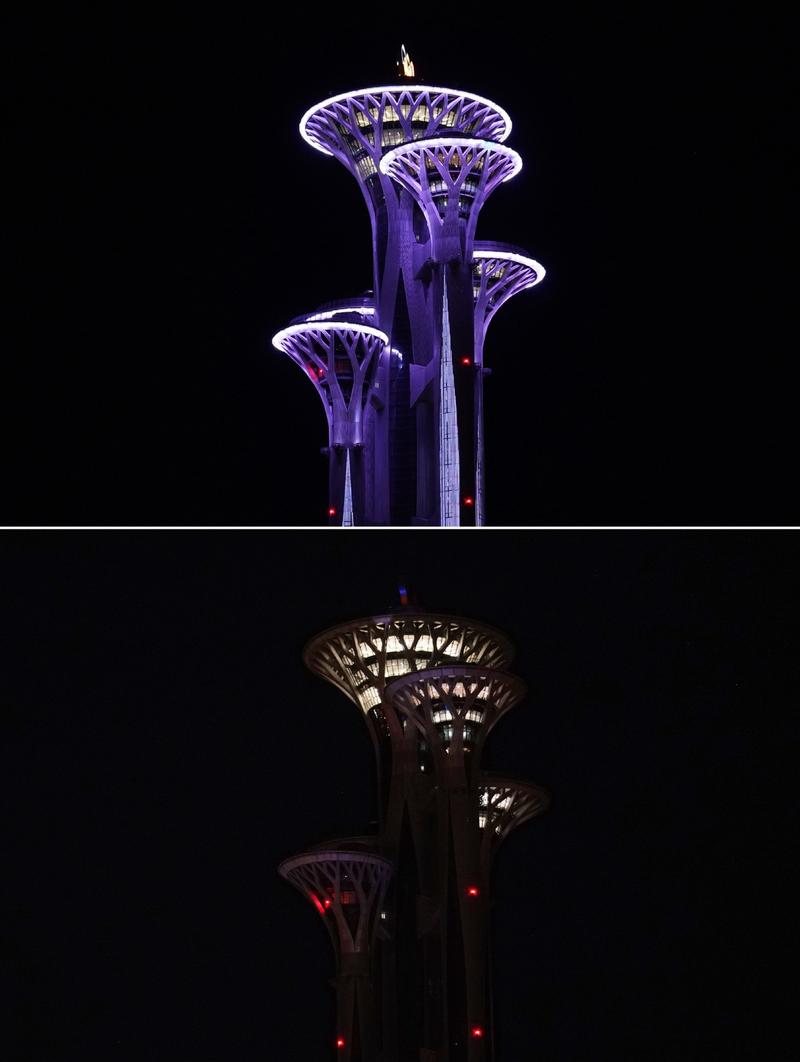 A combination picture shows the Olympic Tower before (top) and during Earth Hour in Beijing, China.(PHOTO / XINHUA) 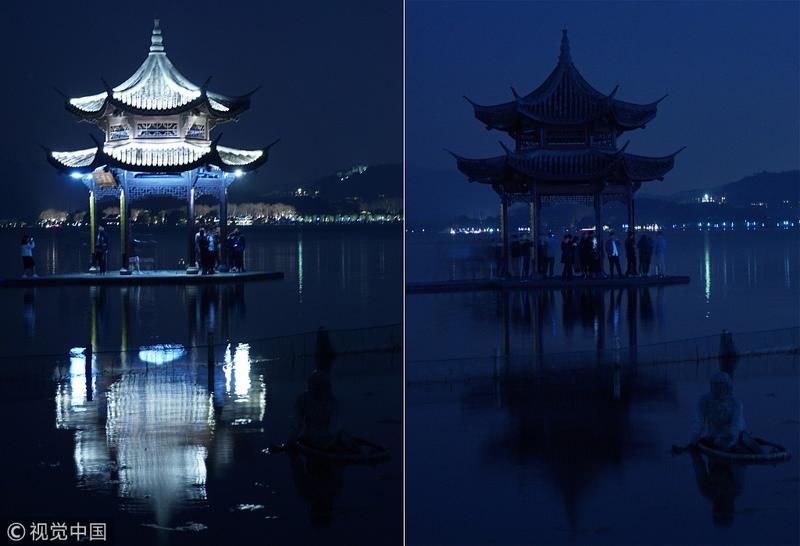 An activist lights a candle, that is part of a design that forms the number 60, to represent the minutes in an hour, during the Earth Hour celebrations, in La Paz, Bolivia, Saturday, March 30, 2019. Earth Hour takes place worldwide and is a global call to turn off lights for 60 minutes in a bid to highlight the global climate change. The Earth Hour was started in Australia in 2007, which has become a global event. (AP Photo/Juan Karita) 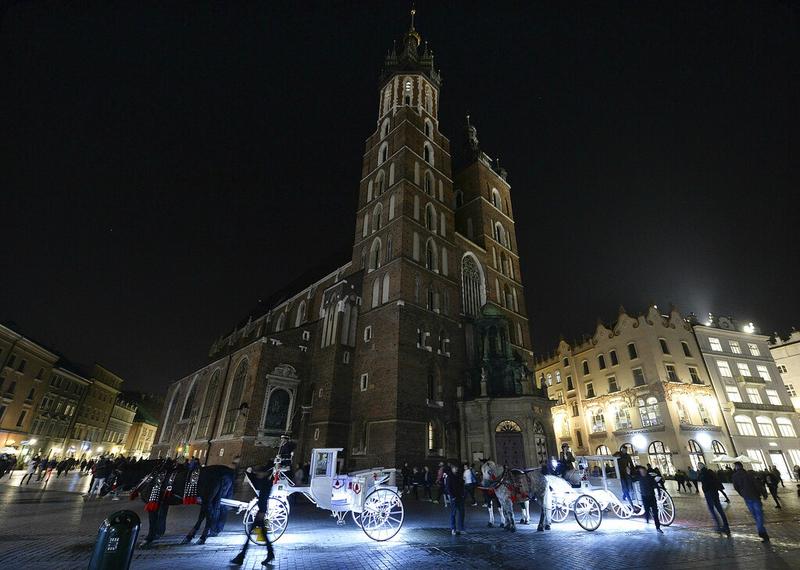 Lights are off for the global Earth Hour at the 14th-century red brick St. Mary's Basilica in the southern Renaissance city of Krakow, Poland, Saturday, March 30, 2019. The Earth Hour gesture calls for greater awareness and more sparing use of resources, especially fossil fuels. (AP Photo/Czarek Sokolowski) 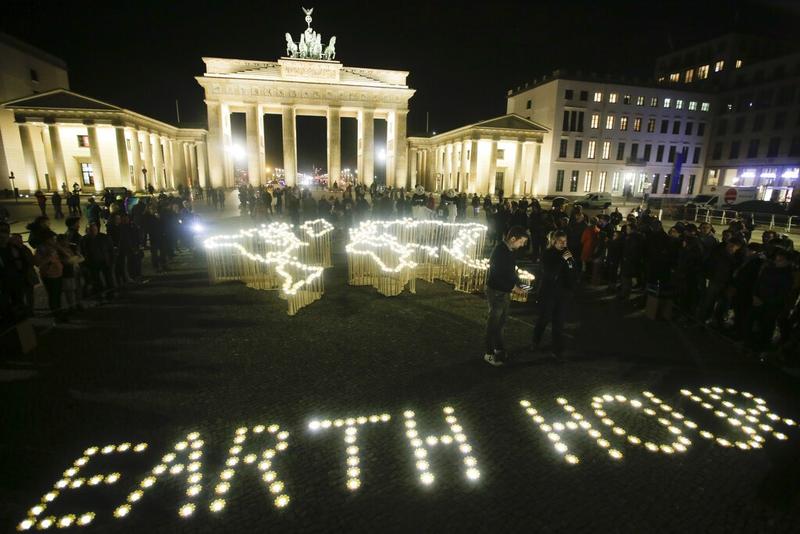 Activists of the World Wide Fund For Nature (WWF) set up led-lights in front of the illuminated Brandenburg Gate to mark Earth Hour, in Berlin, Saturday, March 30, 2019. The global event Earth Hour is the symbolic switching off of the lights for one hour to help minimalize fossil fuel consumption as well as mitigate the effects of climate change. (AP Photo/Markus Schreiber) 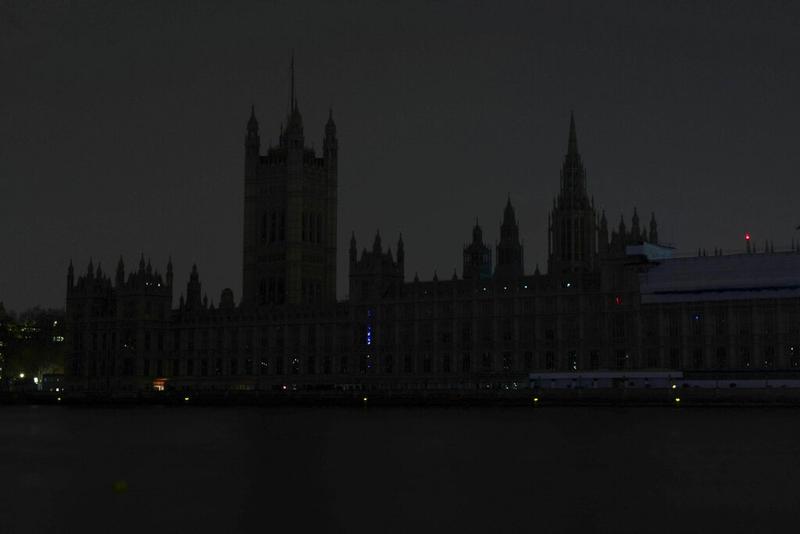 The Houses of Parliament are dark to mark Earth Hour in London on March 30, 2019. (DAVID PARRY / PA VIA AP)

An activist lights a candle, that is part of a design that forms the number 60, to represent the minutes in an hour, during the Earth Hour celebrations, in La Paz, Bolivia, March 30, 2019. (JUAN KARITA / AP)