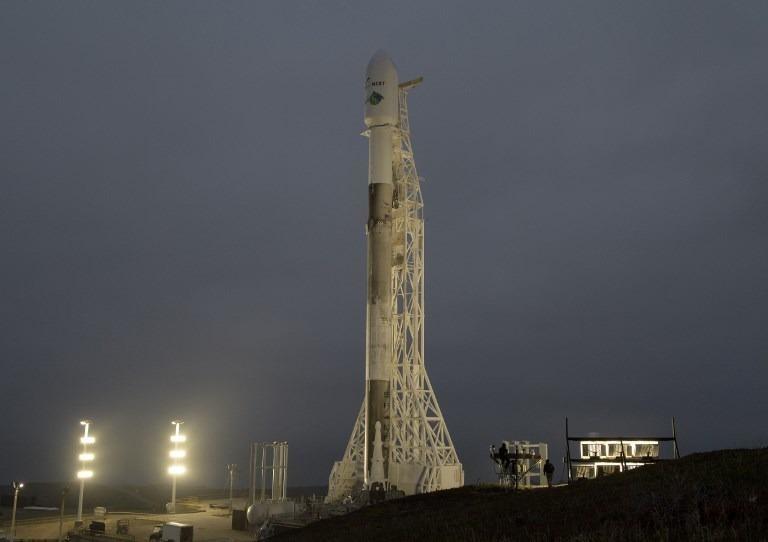 The SpaceX Falcon 9 rocket is seen with the NASA/German Research Centre for Geosciences GRACE Follow-On spacecraft and onboard, May 21, 2018, at Space Launch Complex 4E at Vandenberg Air Force Base in California. (BILL INGALLS / NASA / AFP)

LOS ANGELES — US private spaceflight company SpaceX launched an Argentine Earth-observing satellite on a Falcon 9 rocket, and the booster made its first successful on-land landing at Vandenberg Air Force Base in California on Sunday.

It marked the first time that SpaceX has pulled off its rocket recovery method on land on the West Coast. Its previous West Coast landings had all taken place on the company's drone ship.

The rocket blasted off from Space Launch Complex 4E (SLC-4E) at the air force base at 7:21 pm PDT (0221 GMT Monday). The satellite, dubbed SAOCOM 1A, was deployed to low Earth obit about 12 minutes after launch.

Following stage separation, the first stage of the rocket returned to land at SpaceX's Landing Zone 4 (LZ-4) at Vandenberg.

"Falcon 9 on Landing Zone 4 after delivering SAOCOM 1A to low Earth orbit, marking the 30th successful landing of a rocket booster," SpaceX tweeted.

Including Sunday's successful landing, SpaceX has returned 30 total boosters back to land or to a floating sea platform.

The SAOCOM 1A satellite, operated by Argentina's Space Agency the National Commission on Space Activities, carries an active instrument consisting of a Synthetic Aperture Radar (SAR), which works in the microwave range of the electromagnetic spectrum, particularly the L-band, the operating frequency range of 1-2 GHz in the radio spectrum.

The mission, mainly to gather soil moisture information, consists of a constellation of two identical satellites, SAOCOM 1A and 1B, both of which carry an L-Band SAR polarimetric instrument.

Sunday's launch marks SpaceX's 17th launch of the year, which illuminated the sky, prompting a flood of social media messages from local residents.