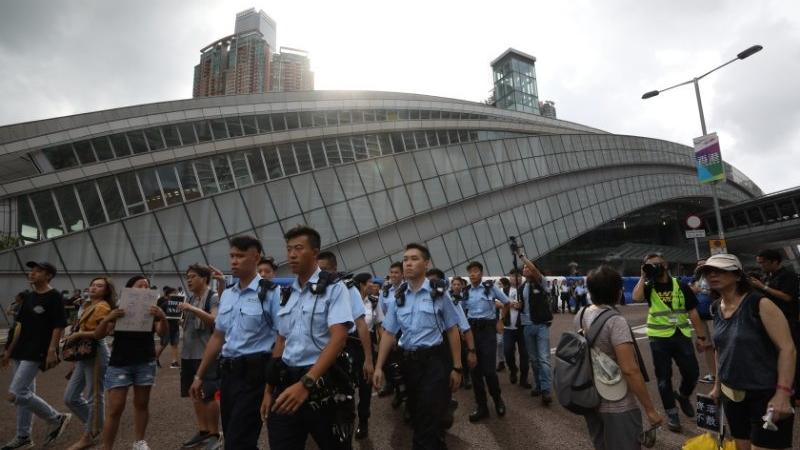 This photo shows police officers near the West Kowloon Station ahead of a protest procession, July 7, 2019. (CALVIN NG / CHINA DAILY)

SHEN ZHEN-The ongoing wave of anti-extradition bill protests in Hong Kong have had an adverse impact on Chinese mainland tourists intending to visit the special administrative region, but there has been no overall panic, according to a travel agency executive in Guangdong province.

Liu Ke, deputy general manager of the Shenzhen branch of China International Travel Service, told China Daily about 10 percent of their clients have so far decided to cancel or put off plans to visit Hong Kong, but they’re relatively rational.

Shuwa travel agency, which offers high-end products under the branch, organizes trips to Hong Kong and Macao for some 200,000 tourists from across the country each year with average per capita spending reaching 1,000 yuan ($128), many during the summer vacation.

Liu said tourists’ sentiment has been negatively affected and they’re paying close attention to developments in Hong Kong. But, the agency has told clients that the SAR remains safe for travel.

However, he said it’s hard to predict what would happen during the summer vacation period as the protests are still going on, disrupting public order.

The summer months of June and July have traditionally been a golden season for the travel industry, but Hong Kong saw its number of tourists fall by 13 percent in June, compared with the previous month, according to the Hong Kong Tourism Board.

Data from a leading Chinese online travel agency show that the number of Hong Kong-bound tourists in July has expanded by 12 percent compared to last month, while that to Southeast Asian countries expanded by half. The most popular destinations in Southeast Asia are Thailand, Singapore and Malaysia.

Overall, the travel market is still on the rise. The number of people who had booked for group, individual and customized tours to Hong Kong from June 15 to July 31 through the travel agency has shown a year-on-year increase of 25 percent.

The protests in Hong Kong have also affected travel to the city by tourists from countries like Japan, the United States, South Korea and Ireland, which have warned their citizens about visiting the SAR due to security concerns.