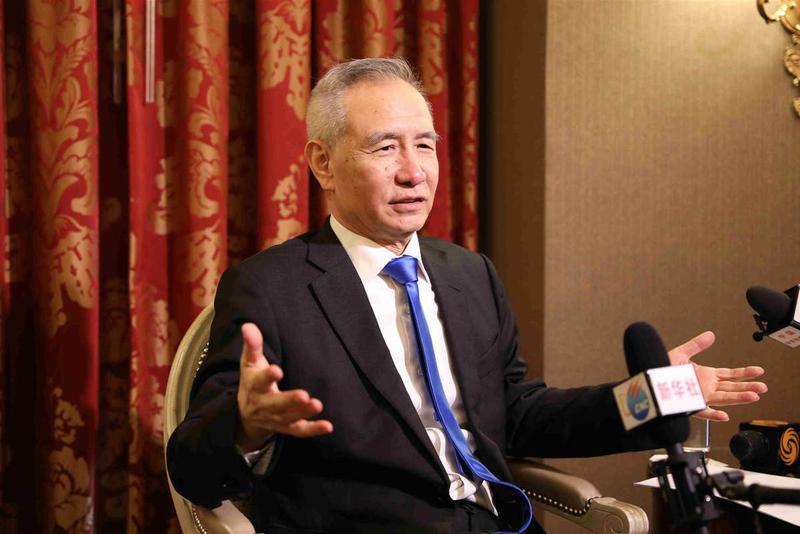 Vice-Premier Liu He talks to the media Friday afternoon in Washington following the 11th round of China-US high-level economic and trade consultations. The two sides agreed to continue negotiations in Beijing. (ZHAO HUANXIN / CHINA DAILY)

What China wants is an equal and dignified trade agreement, for which there are some key disparities to close, but it must address the country's core concerns, such as lifting all additional tariffs, making trade procurement figures realistic and that the text to any deal must be "balanced".

Vice-Premier Liu He said this late Friday, at the end of two days of trade talks in Washington. He said the two sides had agreed to continue talks in Beijing, an indication that the negotiations between the world's top two economies haven't yet broken down.

For the first time, Liu, chief of the Chinese side of the China-US comprehensive economic dialogue, revealed the extent of the "differences" remaining in the marathon China-US trade talks, though in the course the two sides have reached consensus on many things.

He also refuted allegations that China "reneged" on its commitments and highlighted the need for the two countries to cooperate for the benefit of themselves and the whole world.

Before elaborating on the existing differences, Liu said China-US economic and trade relations, which have served as the ballast and propeller of the overall bilateral relationship, concern not only the well-being of the peoples of the two countries, but also world peace and prosperity.

China wants a very equal and dignified deal, and under this premise, a good, cooperative deal. I hope our US colleagues would understand this.

The differences center first on the tariffs, which Liu said are the genesis of the trade dispute. "If both sides want to reach an agreement, then all (additional) tariffs must be eliminated," Liu told reporters before flying back to Beijing.

Liu was apparently referring to the additional tariffs being imposed on billions of dollars of Chinese goods over the past few months.

Hours after the Chinese delegation left town, US Trade Representative Robert Lighthizer announced Friday evening that he was preparing to impose additional tariffs on the remaining approximate US$300 billion worth of Chinese imports that haven't already been targeted.

Liu reiterated that raising tariffs harms China, the US and the whole world. "If the US increases tariffs, we must respond," he said.

"We surely hope the US side will adopt a restrained attitude, and the Chinese side will also do, so as to avoid an infinite upgrade."

The vice-premier said China is firmly opposed to the trade war, but the country is fully prepared to fight one. Still, for the interests of its own and US people, and the whole world, China will deal with the trade fight "with utmost rationality", he said.

Asked how the latest tariffs could affect the Chinese economy, Liu said that despite the pressure, he was optimistic about China's economy in the longer term, adding that the economy had entered an up-cycle after bottoming out somewhat in 2018.

He said he believed the Chinese economy would maintain the good momentum of stable and healthy growth, and the country has ample room for fiscal and monetary policy maneuvers.

China and the US now also have differing views on the volumes of trade purchases that China would make, though an initial consensus was reached between Chinese and US leaders in Argentina nearly half a year ago, Liu said.

"We think this is a serious issue that could not be easily changed," he added.

Chinese analysts have earlier said the trade procurement targets should be realistic and in line with real demand, and Chinese consumers would have options to buy from the US and also from other markets.

The third difference is over how balanced the text of the draft trade agreement should be. "We know that every nation has its dignity, so the text ought to be balanced," Liu said.

Overall, the two sides are meeting each other halfway in the draft text, but there needs to be discussions on some key issues, Liu said.

Liu, however, added that he hoped both sides would exhibit flexibility in the talks.

He refuted the criticism of the US side that China reneged on its promises in the draft trade text.

"We believe that it is only natural to have changes before a final deal; it is something that surely occurs in the process, so we don't think the Chinese side has back-walked," he said, adding that he disagreed with the wording of "renege".

"We just had differing views on how to phrase some things in the text, and we hope to resolve it, so it's unnecessary to overreact to the issue," he said.

Liu said that at the level of trade representatives, both sides have the sincerity to solve the existing problems.

"The purpose decides everything," Liu said, in English. "China wants a very equal and dignified deal, and under this premise, a good, cooperative deal," he said. "I hope our US colleagues would understand this."

Liu said he believed both sides have a strong desire to reach a deal. "We need to work hard together to surpass the temporary difficult period of time, and then we'll have a bright future," he said.

Asked by China Daily how China and the US could help world economic growth, whose prospects have been already compromised by the escalation of trade tensions between the two countries, Liu said cooperation serves the interests of the two sides and the whole world, while conflict hurts both.

"We have tremendous common interests and many common foes, only through cooperation could we solve these problems," Liu said.