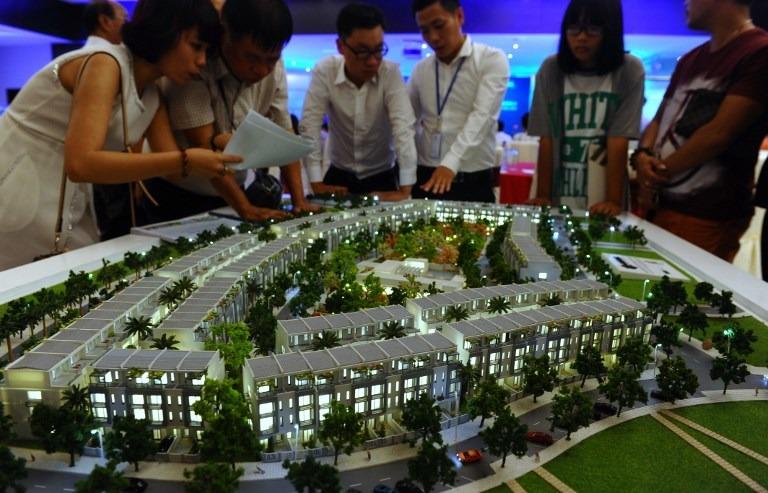 This picture taken on Sept 20, 2015 shows customers looking at the model of a coastal residential development project during a sale launching ceremony held by the project developer in Ha Long city located next to the famous UNESCO world-classed Ha Long Bay. (HOANG DINH NAM / AFP)

HONG KONG - Vietnam is becoming the region’s magnet for property developers and buyers as housing prices in the neighboring Chinese mainland and Hong Kong markets continue to shoot higher.

The country has what it takes to grab the crown from Chinese mainland as the world’s factory. This will give the huge impetus to its thriving real-estate market

Over the past decade, manufacturers in the Chinese mainland and Hong Kong, feeling the pinch from the rising labor and production costs, have turned to Southeast Asian countries as an alternative manufacturing base. The trade skirmish between the world’s two largest economies is likely to accelerate this relocation trend, Chan noted.

Vietnam, hailed as one of the most vibrant economies in the Southeast Asian region, has attracted as much as $20.33 billion in foreign direct investment in the first half of the year, about $7.91 billion of which come from manufacturing and post-production industries.

The FDI sector accounts for almost 70 percent of the country’s export turnover, equivalent to 22 percent of its economic output.

“The country has what it takes to grab the crown from Chinese mainland as the world’s factory. This will give the huge impetus to its thriving real-estate market,” Chan reckoned.

One property project Chan mentioned is Waterina Suites, a residential tower designed by famous Japanese architect Kengo Kuma who is famous for his design of the Tokyo Olympic Stadium 2020.

The project, in the central business district of Ho Chi Minh City, is developed by Maeda Corporation, a Japanese real-estate developer that will celebrate its 100thanniversary next year.

Starting price for units is HK$4.1 million and down payment could be as low as 10 percent.  Rental yield is projected to be as much as 7 percent.