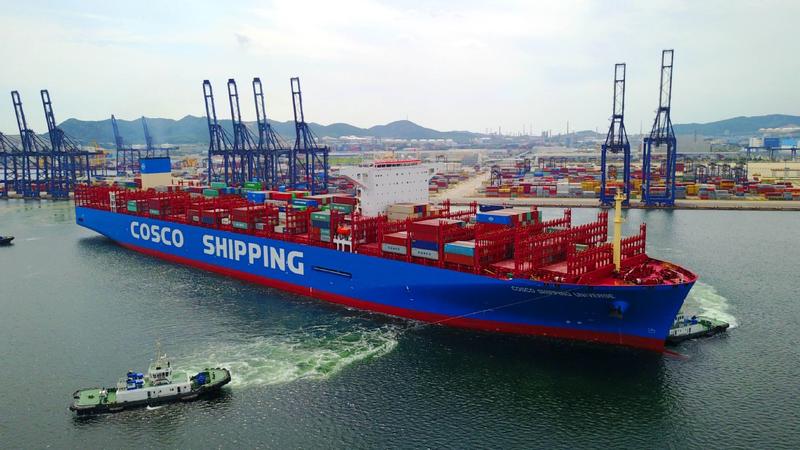 In this undated photo, COSCO Shipping Universe, one of the biggest container ships in the world, docks at Dayao Bay of Dalian Port, Liaoning province. (PHOTO / CHINA DAILY)

It is the first route that the world's second-largest shipping company has opened to link Xiamen with Southeast Asia to meet growing demand for international trade in the region.

At the port's Haitian Container Terminal, robotic bridge cranes unloaded containers filled with bananas and rubber from a newly arrived cargo ship, and then replaced them with clothing, footwear and electromechanical products.

The alliance opened 34 shipping routes by the end of March and provided 269 ship services along these routes, handling a total of 210,000 TEUs (twenty-foot equivalent units), according to Chen Zhiping, president of Xiamen Port Holding Group.

To forge an integrated logistics alliance for the Belt and Road Initiative, Fujian Silk Road Maritime Operation Co Ltd was established as the operating platform to attract companies in the logistics and shipping supply chain around the world.

The alliance is expected to improve the infrastructure of intermodal transport systems and renovate port areas and logistics parks, said Cai Liqun, general manager of the operating firm.

"Synergy will be created by connecting maritime shipping with China-Europe freight trains, and we are also expanding service across the Taiwan Straits," Cai said.

The alliance will help optimize the supply chain of the industry, and we see a promising future in it

The new initiative has been welcomed by over 60 supply chain parties around the world, including major international containership operators.

ZIM, one of the leading carriers in the global container shipping industry, sees increasing market opportunities along the 21st Century Maritime Silk Road as the initiative is receiving more positive responses from the international community.

ZIM's Xiamen branch, one of the initiators of the consortium, has expanded its business along China-Southeast Asia routes in the first quarter of this year.

"The alliance will help optimize the supply chain of the industry, and we see a promising future in it," said Chen Zhiqin, general manager of ZIM Xiamen.

Xiamen port handled more than 10 million containers in 2017, moving up to the 14th-largest container port globally.

The port is set to bolster its competitiveness by leveraging smart tech like unmanned automation. Jobs like loading, unloading, and stockpiling can be completed by automated machines controlled by computers in the terminal's central control room.

Chen Zhiping said his company was dedicated to improving the business environment by lowering cost for carriers and logistics companies and enhancing the port's efficiency.

"We have reduced port charges by more than 15 percent since last year, with the efficiency of customs clearance process up by 55 percent," Chen said.

The Silk Road Shipping plans to expand to more international ports and build a comprehensive intermodal transport network by the end of next year.

It also aspires to develop into a competitive global brand in the field of logistics services and shipping networks by 2025.