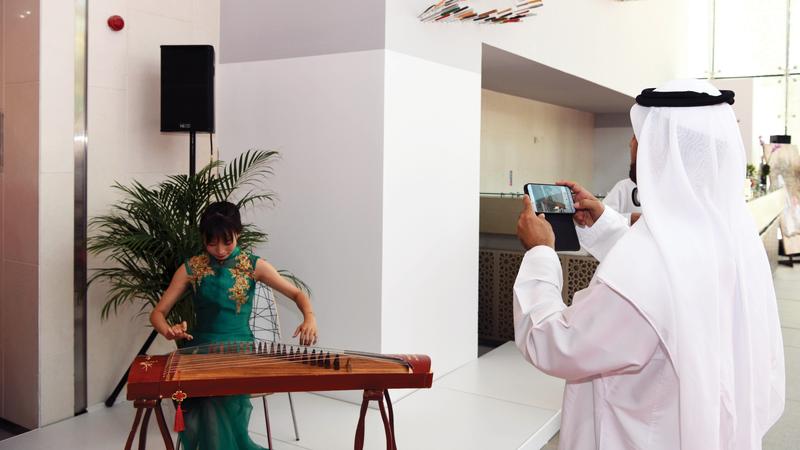 A Chinese musician performs with the guqin, a traditional musical instrument, in Abu Dhabi on July 17. The UAE launched a UAE-China Week on July 17 ahead of the visit by Chinese President Xi Jinping. (WU HUIWO / XINHUA NEWS AGENCY)

Frankincense is used in traditional Chinese medicine (TCM) to alleviate pain and reduce swelling. But the aromatic resin’s inclusion in TCM’s materia medica does not only affirm its capacity to activate the vital life force known as qi. It is also a concrete reminder of the centuries-old trade ties between China and the Arab nations.

Frankincense, after all, came to China via the land trade routes that flourished in the 7th century. The ancient Silk Road encouraged both the trading of goods and the sharing of ideas between Chinese and Arab merchants. That relationship endured through several generations, as seen in the reciprocal state visits by Chinese and Arab leaders in the past few years.

Xi’s state visit was at the invitation of UAE President Sheikh Khalifa bin Zayed Al Nahyan. Chinese Ambassador to the UAE Ni Jian said in an interview with Xinhua News Agency that this was the first visit by a Chinese head of state in 29 years and is of political, historic and strategic significance.

Among Arab countries, the UAE is China’s second biggest trading partner and the largest export market for Chinese goods.

Total trade between China and the UAE increased 1.06 percent to US$41 billion in 2017, according to Xinhua.

Chinese and UAE firms have jointly invested in several infrastructure projects. These include the construction of a solar power plant and a clean coal power plant in Dubai and the expansion of the Khalifa Port in the UAE capital of Abu Dhabi.

On a broader scale, China-Arab relations are expected to be strengthened by the 21st century version of the Silk Road — the Belt and Road Initiative.

The Belt and Road was even included at the eighth ministerial meeting of China-Arab States Cooperation Forum (CASCF) held early this month in Beijing.

Xi opened the forum by saying Arab countries are China’s natural partners in building the Belt and Road given their important geographic locations.

Analysts interviewed by China Daily Asia Weekly said the Belt and Road Initiative will expand bilateral trade, boost investments and open up new markets for both Chinese and Arab companies.

“China has been ‘looking west’ and China-Middle East relations have been strengthened (by the Belt and Road Initiative),” said Sun Degang, deputy director of the Middle East Studies Institute at Shanghai International Studies University.

The Arab world straddles West Asia, Africa and Europe and has a huge potential consumer market of 350 million, he said.

“China and the Arab nations have complementary goals and objectives (that can lead to) a strategic partnership,” said Sheikha Alanoud Ebraheem Al-Sabah, a Kuwaiti-based scholar of China-Arab relations.

She said China is a fast-growing economy that needs to secure its energy sources and access to overseas markets. Arab countries, meanwhile, need a market for their oil and gas exports, and additional infrastructure investments to develop their other industries.

In 2014, Xi called on Arab states to support the Belt and Road Initiative during the sixth ministerial meeting of the CASCF. He said China and Arab states enjoy mutual understanding and friendship because of the Silk Road, adding that they are natural partners for building the initiative.

Four years after Xi made that call, China and the Arab states have been involved in “fruitful exchanges and cooperation”, according to Chinese State Councilor and Foreign Minister Wang Yi.

In his article published on July 8 in the Gulf News, Wang said in the past four years Xi went on several state visits to Middle Eastern countries and hosted the heads of state of Egypt, Saudi Arabia, Morocco and Palestine. China has also established or upgraded its strategic relations with 11 Arab countries and signed Belt and Road cooperation agreements with nine Arab states.

Both the Silk Road Fund and the Asian Infrastructure Investment Bank have invested in Arab countries.

The strong diplomatic and economic ties have brought in more trade and investments. Wang said China-Arab trade rose 11.9 percent to US$200 billion in 2017, while Chinese investments in Arab countries increased 9.3 percent to US$1.26 billion.

“In the case of Sino-Arab states’ partnership, I would expect to see Arab development as the focus, trying to build regional stability through economic development, using Belt and Road cooperation as a means of facilitating this,” said Jonathan Fulton, assistant professor of political science in Abu Dhabi’s Zayed University.

Fulton said Chinese firms are among the biggest investors in Oman’s Duqm Special Economic Zone and the Khalifa Industrial Zone Abu Dhabi (KIZAD) in the UAE.

Reuters reported that 15 Chinese companies have poured US$1 billion into KIZAD, while a consortium of Chinese firms have invested in the Duqm Special Economic Zone.

Analysts said these investments are also crucial to Arab countries’ next stage of development: diversifying their economies which have long relied on fuel exports. Several Middle Eastern countries such as Saudi Arabia, Qatar and Kuwait have seen how falling oil prices in 2014-16 dented their growth. This pushed them to explore and develop other industries.

Sholto Byrnes, senior fellow at the Malaysia-based Institute of Strategic and International Studies, said the Arab world’s ties with China are important “because China can help with the modernization and diversification of the Gulf economies”.

“The Belt and Road Initiative will provide another source of growth for Arab countries,” said Terence Chong, executive director of the Lau Chor Tak Institute at The Chinese University of Hong Kong.

Chong said that by partnering with China, Arab countries can create other industries that can reduce their dependence on the oil and gas sector.

The Duqm Special Economic Zone — envisioned as a key to Oman’s economic diversification — is a case in point. Chinese firms, the biggest investors in Duqm, have committed to build a methanol plant, pipe factories, a car assembly plant and a hotel within the next four years, according to a Reuters report.

Saudi Arabia, which rolled out its Saudi Vision 2030 in 2016, has also tapped China as a partner in its economic diversification. After his state visit to Beijing last year, Saudi Arabian King Salman bin Abdulaziz Al Saud went home with US$65 billion worth of deals which include funding for petrochemical projects in both China and Saudi Arabia.

He said apart from China, Arab countries will be able to export products to other Asian and African countries that will be connected by the roads, ports and railways built under the Belt and Road Initiative.

China, as the world’s biggest oil importer, sources most of its crude from Middle Eastern countries. This, Mirza said, is why oil will remain a “very important factor” in China’s relationship with the Arab world. But the Belt and Road Initiative will expand this cooperation into other sectors.

“The mutual synergies can easily benefit both sides in trade, manufacturing, finance, technology and culture,” he said.