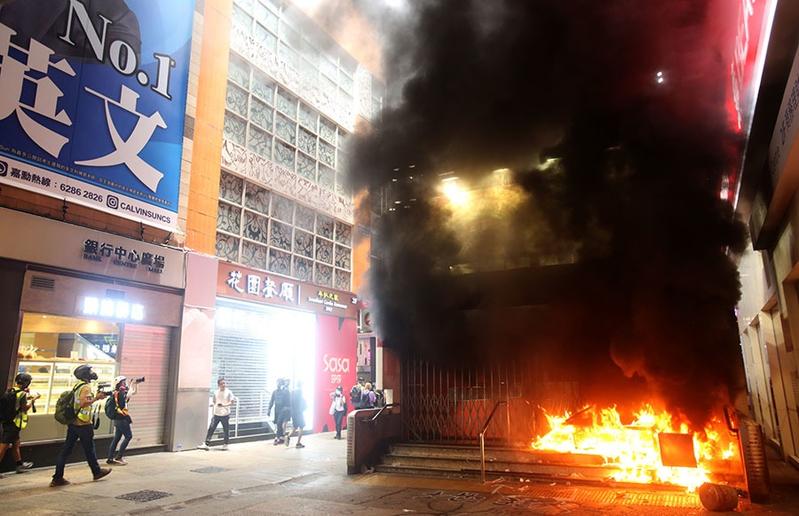 Rioters set fire to an exit of the Mong Kok subway station on Oct 27, 2019, sending plumes of thick black smoke into the air. (PHOTO / CHINA DAILY)

Hong Kong has been on the boil since June, with black-clad rioters paralyzing airport services, barricading streets, vandalizing shops linked to China's mainland, and storming public facilities, including subway stations. And four high-profile people, dubbed the "gang of four", are believed to be behind the unrest.

Besides coordinating strategy for the so-called "pro-democracy movement", they have been accused of becoming pawns in the hands of anti-China forces in the West to meddle in Hong Kong affairs.

By asking external forces to meddle in Hong Kong affairs, Jimmy Lai Chee-ying has sought to serve as a political tool for foreign powers to oppose China and cause chaos in Hong Kong,  reports Xinhua

Xinhua News Agency called Jimmy Lai the "chief strategist" of the unrest in the financial hub.

Lai, 70, founder of media company Next Digital and the tabloid Apple Daily, has played an important role in fomenting chaos and instability in Hong Kong, Xinhua said.

By asking external forces to meddle in Hong Kong affairs, Lai has sought to serve as a political tool for foreign powers to oppose China and cause chaos in Hong Kong, the news agency said.

It is believed Lai has been making donations to political parties in the United States.

It is said that through him, the foreign anti-China forces are funding the opposition leaders and a small section of so-called "Hong Kong independence" forces.

Lai has frequently met with the US politicians. In July, he was received by US Vice-President Mike Pence and Secretary of State Mike Pompeo, with whom he is said to have discussed developments in Hong Kong.

Xinhua said Lai was behind the "Occupy Central" movement in Hong Kong in 2014 - in which those protesting against Hong Kong's electoral reform plan brought the center of the city to a standstill by occupying major thoroughfares - adding he visited Taiwan in 2013 to learn about street protest tactics.

The news agency accused Lai of playing an active role in the ongoing protests and violence. It said the Apple Daily that he owns published advertisements calling on people to take to the streets.

Lai claimed the West has the obligation to lend support to "change not only the future of Hong Kong but even that of the whole of China".

This is the problem that has not been dealt with in Hong Kong for over 20 years, said Ma, who is also a barrister, adding that this was responsible, to some extent, for causing rifts and the current unrest.

If the mainland's achievements are properly disseminated, Hong Kong people would appreciate, Ma said. He, however, said many have been swayed by Lai's "unfair and unbalanced reports".

Mark Pinkstone, a veteran journalist, described Apple Daily as a "notorious" newspaper that has built its reputation on reports about scandals and gossips.

According to him, Lai has been claiming that Hong Kong needs democracy and that the central government is taking over Hong Kong's freedom. "But it's not true."

Before Britain handed over Hong Kong to China on July 1, 1997, Lee actively supported policies by British authorities and pleaded for external interference in Hong Kong affairs, the news agency said.

When he visited the US in 1988, Lee said: "I believe many will think it is best that Hong Kong remains a British colony for another 100 years."

He is said to have told the US Congress in 1990 that Washington should enact special policies based on the political will of a fraction of Hong Kong population.

During his visit to the US in 1996, Lee is believed to have again asked Washington to meddle in Hong Kong affairs.

After Hong Kong's return to the motherland, Lee is said to have continued his campaign against the "one country, two systems" principle, repeatedly targeting the central government.

When China was preparing for the 2008 Beijing Olympics, Lee, in his article in the Wall Street Journal, asked the US to use the Games to pressure China on so-called "human rights".

For a long time, Lee had been in close contact with people with anti-Chinese sentiments in the US and the United Kingdom, and he appealed to the Western countries to meddle in Hong Kong and China's internal affairs, according to Xinhua.

Regarded as "godfather" by Hong Kong's opposition parties, Lee had once said he "dared to be the running dog for colonialism". Using his influence as member of the city's Legislative Council and a barrister, he is believed to have mentored a number of "hardcore troublemakers" in Hong Kong, including Benny Tai, the mastermind of "Occupy Central" movement, and Jimmy Lai.

Lee tried to exploit the proposed amendments to the now-withdrawn extradition bill to stir up chaos in Hong Kong by acting as organizer of the latest demonstrations, and sought foreign intervention in the matter during his visits to the US, the UK and Canada.

Martin Lee, Anson Chan Fang On-sang and other opposition figures were found to have secretly met with Julie Eadeh, a diplomat from the US Consulate General in Hong Kong, in August.

Martin Lee is said to have colluded with Jimmy Lai to publish anti-government propaganda with the help of the latter's tabloid.

Chan, who failed in her attempt to become chief executive of Hong Kong, openly confronted the HKSAR as well as the central government after her retirement.

After she became a member of Hong Kong's legislative council, Chan led the city's opposition in creating disorder and chaos under the guise of democracy, Xinhua said.

Several Hong Kong media reports have reported that Chan received HK$3.5 million ($446,000) in "political contributions" from Jimmy Lai on three occasions between 2013 and 2014 for various activities, including opposing the central government and inciting chaos in Hong Kong.

She is reported to have asked foreign forces to intervene in Hong Kong affairs, and also visited the US and met with US politicians, including Vice-President Mike Pence. She distorted truth, spread rumors, and attacked Hong Kong's rule of law, and the "one country, two systems" principle, reports said.

During Hong Kong protests, Chan is said to have used her position as a senior former government official to incite civil servants, attempt to paralyze operations of the HKSAR government and weaken the power of the chief executive.

Chan also instigated young people to defy the law, while she hid in hotels with several others who were behind the unrest in Hong Kong, for secret meetings, reports said.

The "gang of four" is selling off interests of China, including Hong Kong, to please the US for its own benefit, Xinhua said, calling them "pawns of foreign forces seeking to agitate for a color revolution'."

Mike Rowse, former director-general of InvestHK, the department responsible for foreign direct investment and support overseas businesses to set up and expand in Hong Kong, said opposition leaders, including Martin Lee, who seek foreign intervention in Hong Kong, are asking for the impossible.

It's no use inviting foreign intervention in the hope of finding a solution to Hong Kong's problems. Washington, London and Berlin may make Hong Kong opposition leaders feel important but nothing else will happen, the former Hong Kong government official said.

"In today's Hong Kong, such people who incite chaos, jeopardize Hong Kong's future and betray their nation will not be allowed to run amok," Xinhua concluded.