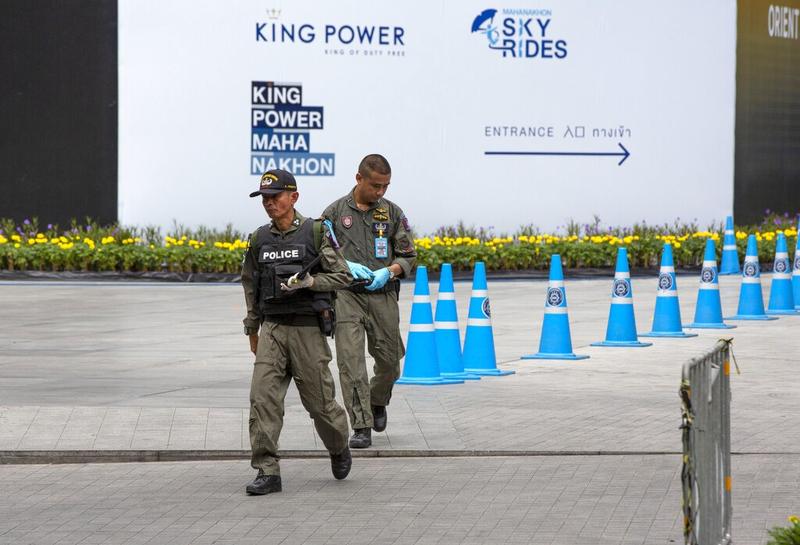 BANGKOK — Thai Prime Minister Prayuth Chan-o-cha on Friday ordered an investigation into several small bombings in Bangkok that took place as Thailand was hosting a high-level meeting attended by US Secretary of State Mike Pompeo and his counterparts from China and several Asia-Pacific countries.

"We must demonstrate our collective effort to fight against those who intend to harm the country," Prayuth's office said in a statement

Explosive devices were found or detonated at least six locations, including two at stations of the capital's elevated Skytrain rail system. Other sites included a government complex on the outskirts of the city, and near the offices of a company associated with supporters of Prayuth's new government, police said.

"A group of ill-intended people have recently incited violence while the government is propelling the country forward," Prayuth's office said in a statement, urging the public not to panic and cooperate with authorities in investigating the blasts.

Thailand this week has been hosting an annual meeting of foreign ministers of the 10-member Association of Southeast Asian Nations — ASEAN — and their counterparts from other Asia-Pacific countries. The bombings did not disrupt the proceedings, which already were under tight security.

Deputy Prime Minister Prawit Wongsuwan told reporters the perpetrators were trying to create a "situation." When asked whether it was connected to the junta's recent relinquishing of power, he said "I don't know either, let authorities investigate first." Thailand recently ended five years of military rule following a 2014 coup.

The government that took power last month is led by an ex-general, Prayuth Chan-ocha, who staged the 2014 takeover and led a military government until he took power through elections this year. The government's critics say the election was not fair because the rules favored the parties backing Prayuth.

Prayuth's main antagonists are supporters of former Prime Minister Thaksin Shinawatra, who was ousted by a coup in 2006. The action set off years of sometimes violent contention for power between his supporters and opponents. Thaksin's supporters are now the main opposition party in the new parliament.

The explosions in Bangkok were not the first time violence has occurred at an ASEAN event hosted by Thailand.

In 2009, Thaksin's supporters, seeking to force out a government of their opponents, stormed a hotel in the resort city of Pattaya that was the venue for the regional group's summit meeting. The ASEAN leaders were forced to flee, some by helicopter, and the summit cancelled.

Police on Thursday said they had found two fake bombs outside their headquarters in central Bangkok, near the venue of the current meeting of ASEAN foreign ministers. Thai media cited police as saying that two men had been arrested in connection with the incident.

"It seems to be an isolated incident, a minor incident, with the intent of trying to create news but not to cause harm to people," he told reporters. He said none of the foreign ministers expressed concern.

The use of small, generally harmless bombs, though infrequent, is a regular part of the Thai political scene, though rarely do the perpetrators claim responsibility or get arrested. While opponents of the government in power at any given time are usually blamed, there is usually speculation that such incidents are a result of a power struggle of factions within the country's highly politicized security forces.

Thailand has also experienced more serious bombings. There is a low level insurgency by Muslim separatists in southern Thailand in which car bombs and roadside improvised explosive devices are often employed, and Bangkok was stunned by the 2015 bombing at the city's Erawan Shrine, in which 20 people were killed and more than 100 injured, many of them tourists.