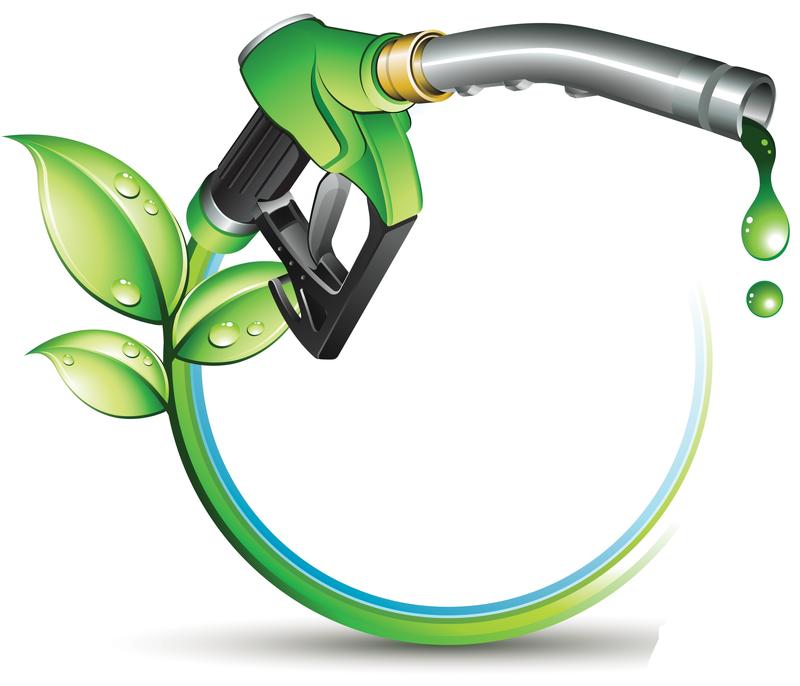 Clean, green energy has become a growth industry in China, driven by the need to reduce carbon emissions and cut air pollution that is choking its major cities.

China’s clean energy industry already provides more than 1 million jobs and will produce even more in the coming years as the government ramps up its production of biofuels, aimed primarily at the transport sector.

As one of the world’s biggest carbon dioxide (CO2) emitters, China also faces a major problem with air pollution.

China’s clean energy industry already provides more than 1 million jobs and will produce even more in the coming years as the government ramps up its production of biofuels, aimed primarily at the transport sector

The International Energy Agency (IEA) said that although climate change and energy security are of concern to China, it is not clear which of these drivers has been the primary motivator for biofuels development.

The policies China has implemented so far to help develop biofuels have resulted in the country becoming the world’s third largest ethanol producer. Ethanol is produced from plants such as sugarcane or corn and mixed with gasoline to produce E10 — a biofuel containing 10 percent ethanol and 90 percent gasoline.

The government has mandated that E10 is made available at fuel stations throughout the country by 2020.

The country’s biggest oil refiner, China Petroleum & Chemical Corp, or Sinopec, has already started building a B5 biodiesel plant in Shanghai to refine “gutter oil” (illicit cooking oil recycled from waste oil) and supply fuel to 200 gas stations across the city. B5 is a mix of 5 percent leftover oil from the catering industry and 95 percent diesel.

Both E10 and B5 will go some way toward reducing carbon emissions from exhausts and cutting air pollution in China’s urban centers.

Analysts say these developments have significant implications for the country’s drive to broad-base its energy mix, achieve energy security and cut polluting emissions.

Biofuel: Their production and use could, in theory, be sustained indefinitely

Biofuel is renewable, versatile and environmentally friendly. It is an ideal alternative to fossil fuel,” a senior official with China’s National Energy Administration told Xinhua.

Analysts say Sinopec’s decision to increase its involvement in the biofuel market marks a significant shift in strategy.

Biofuels should have a place in the overall global energy mix, especially in the transport sector, but it has been slow to take off

Biofuels, although desirable from an environmental point of view, are more expensive than traditional fuels like diesel and gasoline.

China’s push to promote biofuel as an alternative fuel is tempting companies from various industries to vie for a larger share of the world’s fastest-growing new energy vehicle market.

According to the IEA, biofuels for transport, including ethanol and biodiesel, have the potential to displace a substantial amount of petroleum.

Venkatachalam Anbumozhi, an economist with the Economic Research Institute for ASEAN and East Asia (ERIA) and an expert on energy policy, said biofuels in Asia, including China, are mostly driven by external factors such as the global oil price.

“What Asia needs to do is differentiate and distinguish between first generation biofuel — that is biofuels made from agricultural feedstocks, vegetable oils and animal fats — using conventional technology and to speed up the development of second-generation biofuels made from non-food stocks and wood waste (cellulosic materials), micro-algae or other technologies,” he told China Daily.

Another factor that has also been thrown into the transport/energy mix is the focus on electric vehicles.

“Biofuels should have a place in the overall global energy mix, especially in the transport sector, but it has been slow to take off,” said Zhai Yongping, technical adviser on energy in the Sustainable Development and Climate Change Department at the Manila-based Asian Development Bank (ADB).

“Having said that, some countries — China, the United States and Brazil, most notably — are doing better than others when it comes to biofuel technology and production.” 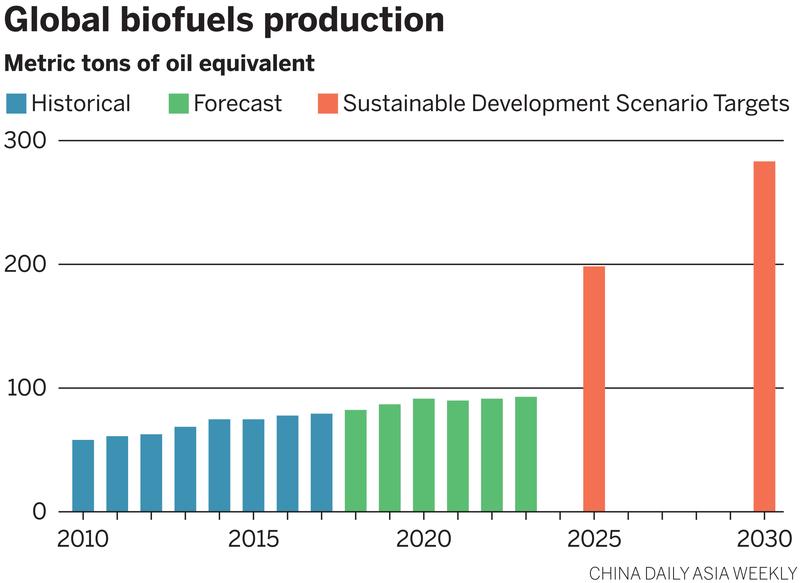 He said that when the global price for oil was at US$100 a barrel, biofuels were an economic substitute for oil, especially in the transport sector.

“Even at US$70 a barrel, it is still a good proposition,” Zhai told China Daily.

“Since we started to take biofuels seriously, we have also seen the focus on electric vehicles and battery technology which has overshadowed biofuel.”

In principle, most countries support biofuel technology, but financial support incentives have become less clear as many countries shift their focus to electric vehicles.

Zhai said the development of biofuel and electric transport technologies should be developed “side by side”.

“I think China sees this as an option, with researchers now working on second-generation biofuel technology which does not require food stock being used in its production,” he said.

“In China’s case, it has a clear policy on reducing emissions and air pollution, and is serious in using and developing technologies in all areas including biofuels and electric vehicles.

“What is less clear are the financial incentives provided to biofuels compared to electric vehicles. Ideally, the subsidies should be technology neutral given both biofuels and electric vehicles can meet similar policy purposes.”

Last year, global biofuel production grew just 2 percent (140 billion liters), while average production growth of around 3 percent a year is anticipated over the next five years, according to IEA data.

Overall, however, conventional transport fuels remain dominant in Asia despite advances in biofuel technology in some countries such as China and Japan.

“Within the framework of biofuels implementation, there are numerous issues that need to be looked at to ensure the benefits are derived holistically,” he told China Daily.

“For example, factors including life-cycle well-to-wheel reduction, land use, water consumption, specifics such as engine performance to fuel economy, overall emissions, and overall infrastructure costs require deep evaluation and analysis in order to ensure the success of such a program,” he said.

Over the past 15 years, ACFA has been working with governments across Asia to help plan and evaluate their biofuels programs.

In September last year China, for the first time, set a targeted timeline of 2020 to roll out the use of ethanol in gasoline nationwide for cars as part of efforts to clean up pollution and optimize the country’s energy mix.

According to a joint release by the National Development and Reform Commission, the National Energy Administration and the Ministry of Finance, the country will implement the plan while targeting the largescale production of cellulose ethanol and advanced biofuel technologies by 2025.

It is the first time the government has set a timeline for promoting E10.

Earlier this year, India announced a new policy to promote biofuels as part of efforts by the world’s third largest emitter of greenhouse gases to cut imports of fossil fuels like oil, gas and coal.

The Indian government aims to develop a biofuel economy worth US$15.6 billion over the next two years.

In Thailand, the government aims to increase the ethanol content in fuel from 7 to 10 percent; Indonesia wants to increase it from 20 to 25 percent, while Vietnam wants a 5 percent blend in its fuel mix.

A study in April by the Queensland University of Technology in Australia said that the Australian government should mandate the use of biofuels, saying it could deliver more than 8,000 direct and indirect jobs and generate US$1 billion a year in revenue.

At present only two Australian states have mandated ethanol mixes in fuel sold at the pumps.

Just how sustainable biofuels are is open to debate, according to ERIA’s Anbumozhi.

Although it has been debated intensively, biofuel is perceived as one possible option to address the oil security issue, since expanding the use of biofuels will not only result in reducing the demand for oil but also contribute to the diversification of import sources for liquid fuels

“If you look at it from the macroeconomic level, it does contribute to energy security,” he said.

According to the IEA, Asia’s oil usage will expand to around 6.6 million barrels per day (bpd) by 2040 from 4.7 million bpd now, with the number of road vehicles increasing by two-thirds to around 62 million, the agency said in an October 2017 report.

Due to limited fuel reserves, most of the countries in the region are heavily dependent on imports for their oil supply, which is a major, if not the most critical, concern in their energy policies, analysts say.

Although it has been debated intensively, biofuel is perceived as one possible option to address the oil security issue, since expanding the use of biofuels will not only result in reducing the demand for oil but also contribute to the diversification of import sources for liquid fuels.

Biofuel production will also provide an additional way to increase the income of farmers throughout the region. But this argument has its own problems, especially for Malaysia and Indonesia — the world’s biggest producers of palm oil.

Earlier this year, the European Parliament voted to ban the use of palm oil in biofuels from 2021, amid mounting concerns about its impact on the environment.

Malaysia and Indonesia fear that if the ban goes ahead, the livelihood of well over a million rural workers could be affected.

Palm oil, also a major ingredient in products from food to cosmetics, has long been controversial as environmentalists say it drives deforestation, with huge swathes of rainforest, particularly in Indonesia, logged in recent decades to make way for palm oil plantations.

The use of the commodity in food and cosmetics had already dropped in Europe, partly due to pressure from green groups on major corporations, but its use has been increasing in biofuels.

Replacing fossil fuels with biofuels has the potential to generate several benefits. In contrast to fossil fuels, which are exhaustible resources, biofuels are produced from renewable feedstock.

Their production and use could, in theory, be sustained indefinitely — resulting in major economic benefits and reducing the dependency on imported oil.