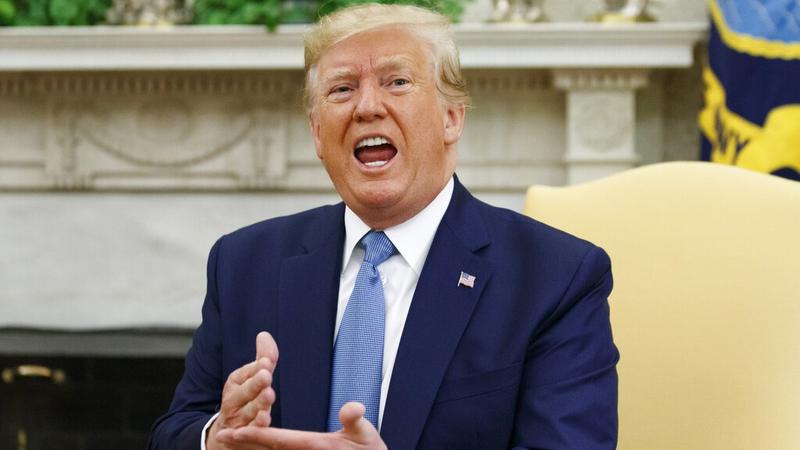 US President Donald Trump speaks during a meeting with Pakistani Prime Minister Imran Khan in the Oval Office of the White House, July 22, 2019, in Washington. (ALEX BRANDON / AP)

WASHINGTON - US President Donald Trump promised on Friday to retaliate against France for adopting a pioneering tax on internet giants like Google, Amazon and Facebook.

He also managed to get in a shot at French wine. Trump, who doesn't drink alcohol, tweeted: "I've always said American wine is better than French wine!"

The digital tax primarily targets companies that use consumer data to sell online advertising. The tax is designed to stop multinationals from avoiding taxes by setting up headquarters in low-tax European Union countries. Currently, the companies pay nearly no tax in countries where they have significant sales.

Trump says that if anybody taxes American technology companies, it should be their home country. He adds, referring to French President Emmanuel Macron: "We will announce a substantial reciprocal action on Macron's foolishness shortly."

Trump says that if anybody taxes American technology companies, it should be their home country

The French law does not specifically target US companies. It targets any digital company with yearly global sales worth more than 750 million euros (US$835 million) and French revenue exceeding 25 million euros (US$27 million). The revenue threshold is supposed to allow more room for smaller companies to enter the market.

However, the Trump administration emphasizes that the services covered under the tax are ones in which US firms are global leaders. US Trade Representative Robert Lighthizer initiated an investigation earlier this month to determine whether the tax is discriminatory or unreasonable and restricts US commerce. Such a finding would allow Trump to levy retaliatory tariffs.

Trump was asked in the Oval Office on Friday whether he would apply tariffs to French wines: "I might, I might," he replied.

Trump insisted that he has a good relationship with Macron and had just spoken with him.

"But they shouldn't have done this. They're used to taking advantage of the United States, but not with me as president."

The digital tax has also riled Republican and Democratic members of Congress. Leaders of the Senate Finance Committee have urged Treasury Secretary Steven Mnuchin to explore increasing taxes on French subsidiaries in the US.

France failed to persuade European Union partners to impose a Europe-wide tax on tech giants, but is now pushing for an international deal with the 34 countries of the Organization for Economic Cooperation and Development.