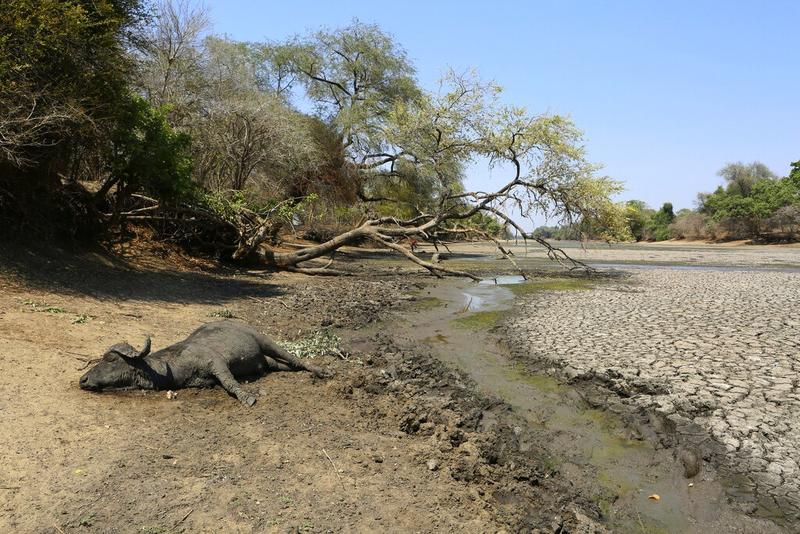 In this Oct, 27, 2019 photo, the carcass of a buffalo lies on the edges of a sun baked pool that used to be a perennial water supply in Mana Pools National Park, Zimbabwe. (TSVANGIRAYI MUKWAZHI / AP)

MANA POOLS, Zimbabwe — Weak from hunger and thirst, the elephant struggled to reach a pool of water in this African wildlife reserve. But the majestic mammal got stuck in the mud surrounding the sun-baked watering hole, which had dramatically shrunk due to a severe drought.

Mana Pools annually experiences hot, dry weather at this time of year. But this year it's far worse as a result of poor rains last year. Even the river's flow has reduced

Eventually park staff freed the trapped elephant, but it collapsed and died. Just yards (meters) away lay the carcass of a Cape buffalo that had also been pulled from the mud, but was attacked by hungry lions.

Elephants, zebras, hippos, impalas, buffaloes and many other wildlife are stressed by lack of food and water in Zimbabwe's Mana Pools National Park, whose very name comes from the four pools of water normally filled by the flooding Zambezi River each rainy season, and where wildlife traditionally drink. The word "mana" means four in the Shona language.

At least 105 elephants have died in Zimbabwe's wildlife reserves, most of them in Mana and the larger Hwange National Park in the past two months, according to the Zimbabwe National Parks and Wildlife Management Authority. Many desperate animals are straying from Zimbabwe's parks into nearby communities in search of food and water.

Mana Pools, a UNESCO World Heritage Site for its splendid setting along the Zambezi River, annually experiences hot, dry weather at this time of year. But this year it's far worse as a result of poor rains last year. Even the river's flow has reduced.

The drought parching southern Africa is also affecting people. An estimated 11 million people are threatened with hunger in nine countries in the region, according to the World Food Program, which is planning large-scale food distribution. The countries of southern Africa have experienced normal rainfall in only one of the past five growing seasons, it said.

Seasonal rains are expected soon, but parks officials and wildlife lovers, fearing that too many animals will die before then, are bringing in food to help the distressed animals. The extremely harsh conditions persuaded park authorities to abandon their usual policy of not intervening. 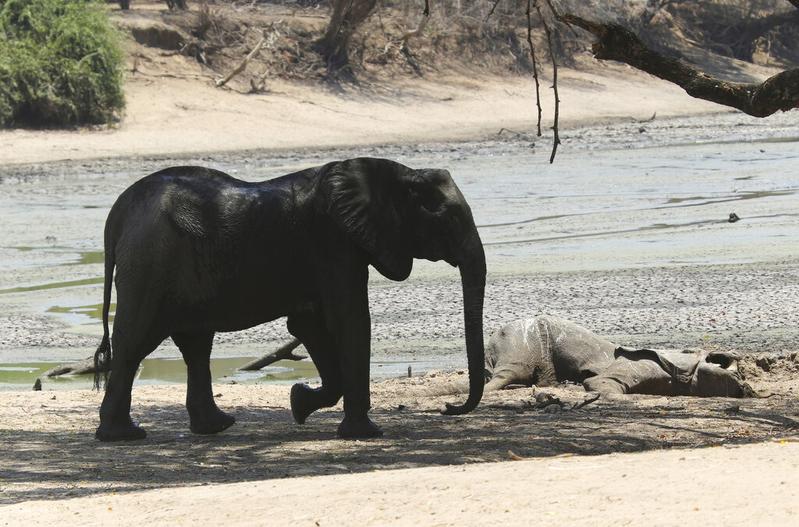 In this Oct, 27, 2019 photo, an elephant walks next to a carcass of another elephant in an almost dry pool that used to be a perennial water supply in Mana Pools National Park, Zimbabwe. (TSVANGIRAYI MUKWAZHI / AP)

"It's beginning to be serious," he said, standing next to the remains of the elephant and buffalo. "It might be worse if we fail to receive rains" by early November. The last substantial rains came in April, he said.

An early end to a "very poor rainy season" has resulted in insufficient natural vegetation to see the animals through, said Mel Hood, who is participating in the Feed Mana project, which is providing supplementary feeding.

Most of the animals in Mana Pools "are more or less confined to the barren flood plains," where temperatures soar to 113 degrees Fahrenheit (45 degrees Celsius), she said.

Separated from neighboring Zambia by the Zambezi, the region's once reliable sources of water have turned into death traps for animals desperate to reach the muddy ponds. Like the elephant and buffalo, many other animals in the park have gotten stuck in the clay while trying to reach Long Pool, the largest of the watering holes at 5 kilometers long.

The animals were pulled out by rangers, but they could not survive predators on the pounce for weak prey.

"The carnivores attacked it from behind," Dzoro said of the buffalo. The elephant carcass had been there for almost a week and emitted a strong stench as flies feasted on it.

At just 5% of its normal size, Long Pool is one of the few remaining water sources across the park's plains. On a recent day, hippos were submerged in some puddles to try to keep their skin from drying out in the extreme heat while birds picked at catfish stranded in the mud.

Two others of Mana's pools have completely dried up, while the third is just 20% to 30% of its usual size and dwindling, Dzoro said.

There are more than 12,000 elephants roaming Mana's flood plains as well as an abundance of lions, buffaloes, zebras, wild dogs, hyenas and elands. The animals are visibly affected by the drought. Some impalas show signs of skin mange. In addition to the land animals, the park has 350 bird and aquatic species, according to the parks agency.

In other parts of Mana, park authorities are pumping water from deep boreholes, but the supplies are barely enough, he said.

"We used to say nature should take its course," Dzoro said of the park's normal policy of not intervening and allowing the ecosystem to find its own balance.

"We are now forced to intervene, which is manipulative conservation, because we are not sure when and how we will receive the rain. To avoid losing animals we have to intervene to maintain population sizes," Dzoro said.

With the acacias, other indigenous trees and grasses that provide the bulk of food for herbivores like elephants and buffaloes also decimated by the drought, authorities began supplementary feeding in July. 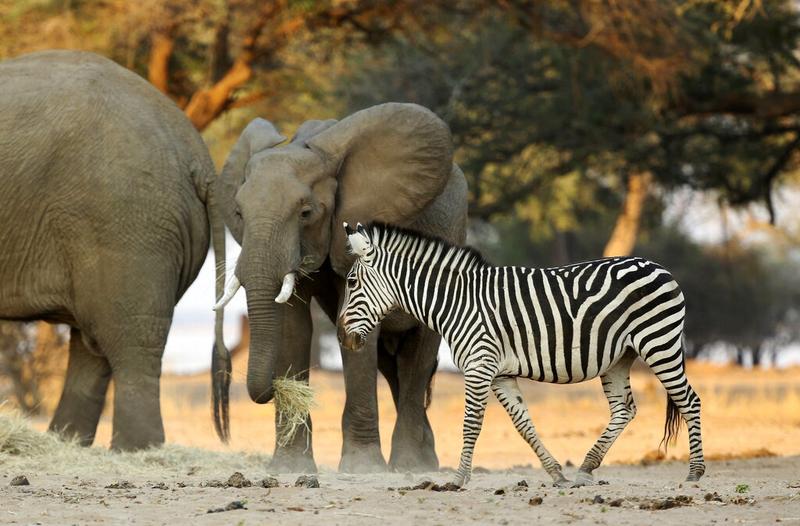 Trucks and tractors ferry hay to various locations in the 2,196- square-kilometer park. In some spots, elephants, buffaloes and zebras are fed next to each other. The Feed Mana project has so far trucked 14,000 bales to the park, said Hood, the animal welfare campaigner.

The group has been appealing for "urgent" donations of items such as soy bean hay, grass and cubes made of nutritious grains and molasses.

"Although it may not be enough to stave off all the hunger pangs, it is certainly giving these animals a chance to survive until conditions improve," Hood said.

Zimbabwe has an estimated 85,000 elephants and neighboring Botswana has more than 130,000. The two countries have the largest elephant population in the world. Zimbabwe says it's struggling to cope with booming numbers of wild elephants and is pushing to be allowed to sell its ivory stockpile and export live elephants to raise money for conservation and ease congestion in the drought-affected parks.

Other African countries, especially Kenya, are opposed to any sale of ivory. And earlier this year the meeting of the Convention on International Trade in Endangered Species voted to continue the ban on all ivory sales.

At Mana Pools, saving the animals is a challenge and officials say Zimbabwe is severely affected by climate change that has changed weather patterns.

In past years, Mana Pools would get up to 24 inches of rain per year, said Dzoro, the wildlife officer. Now it's lucky to get half that.

With such a dramatic reduction, "we can't have perennial sources to sustain animals and some of the perennial springs have dried up. Climate change is affecting us. That's why the manipulative way now is the only way to rescue our fauna," Dzoro said.

"Climate change is real for sure, we are witnessing it," he said.