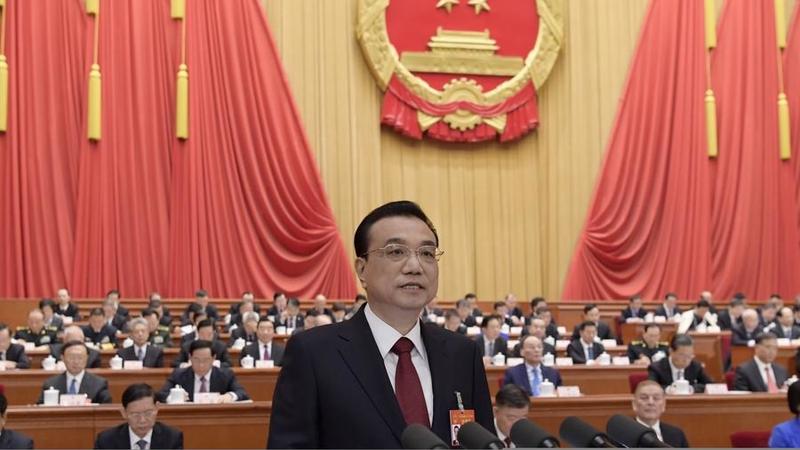 This March 5, 2019 photos show Chinese Premier Li Keqiang shares the government report during the second session of the 13th National People's Congress in the Great Hall of the People in Beijing, capital of China. (LI XUEREN / XINHUA)

Premier Li Keqiang called for stimulating the vitality of market entities, including private businesses, to withstand downward pressure on economic growth and keep the economy within a reasonable range.

This year, China faces greater challenges for its development and should enhance supply-side structural reform, opening-up and innovation, Li said

Li made the comment as part of a panel discussion with National People's Congress deputies from the Guangxi Zhuang autonomous region in Beijing on Wednesday.

This year, China faces greater challenges for its development and should enhance supply-side structural reform, opening-up and innovation, Li said.

Li said various measures, including reduction of taxes and fees, should be fully carried out to lower the burden for the real economy.

The business environment should be optimized to invigorate market entities while trade and investment facilitation should be boosted to attract a larger number of investors, he said.

The premier said outdated and excess production capacity should be cut while traditional industries should be upgraded to promote new technologies and nurture new business models.

He called for accelerating transformation from old growth drivers to new ones and carrying out a number of major projects to unleash the potential of domestic consumption and enhance development.

Development should reflect the improvement of people's livelihoods, and employment for key groups, including college graduates, should be ensured, Li said.

More support should be provided to areas stricken by extreme poverty, and appropriate industries should be developed to help people out of poverty, the premier added.

He also called on the region to strengthen environmental protection and generate profit from green development to improve the lives of locals.

It was the second time Li had attended a discussion with the Guangxi delegation during an annual session of the National People's Congress. Li was elected a national lawmaker from Guangxi in January 2018.

Its combined imports and exports rose to 410 billion yuan (US$61 billion) in 2018, an increase of 14.6 percent year-on-year and 7.5 percentage points higher than the national average, he said.

More than 530,000 new market entities were registered in Guangxi last year, while revenues in the advanced manufacturing sector rose by 12.8 percent, Chen added.