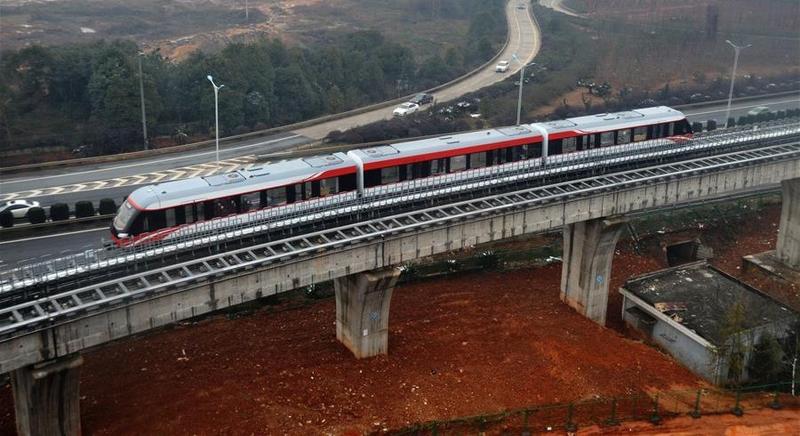 In this Feb 2, 2016 photo, a system debugging is operated on a medium-low-speed magnetic levitation (maglev) train in Changsha, capital of central China's Hunan province. A new medium-low-speed maglev train is expected to roll off the production line in China in the middle of 2018. (LONG HONGTAO / XINHUA)

BEIJING – A new type of medium-low-speed magnetic levitation (maglev) train that can achieve a top speed of 160 kilometers per hour is expected to roll off the production line in China in the middle of this year.

The new maglev train is expected to be a stand out rail transit product serving China's urbanization.

The maglev train is currently in the pilot manufacturing and assembly phase, Zhou Qinghe, president of CRRC Zhuzhou Locomotive Co Ltd and deputy to the National People's Congress (NPC), said on Saturday.

The new train will achieve a substantial speed increase, given the worldwide top speed for this kind of maglev vehicles is currently 100 km/h.

It will also have a 30 percent increase in transport capacity compared with China's first medium-low-speed maglev rail line, operated in May 2016 in Changsha, capital city in central China's Hunan Province.

The train was independently developed in China, said Zhou, who has been in Beijing for the first session of the 13th NPC, set to open on March 5.

The vehicle equipped with a short stator drive system is "very flexible for changes in route," and has a strong climbing ability with low noise production, according to Zhou.

The new maglev train is expected to be a stand out rail transit product serving China's urbanization, said the NPC deputy.

The world's first commercial maglev system went into operation on a 30-km stretch between downtown Shanghai and the city's Pudong airport in December 2002.