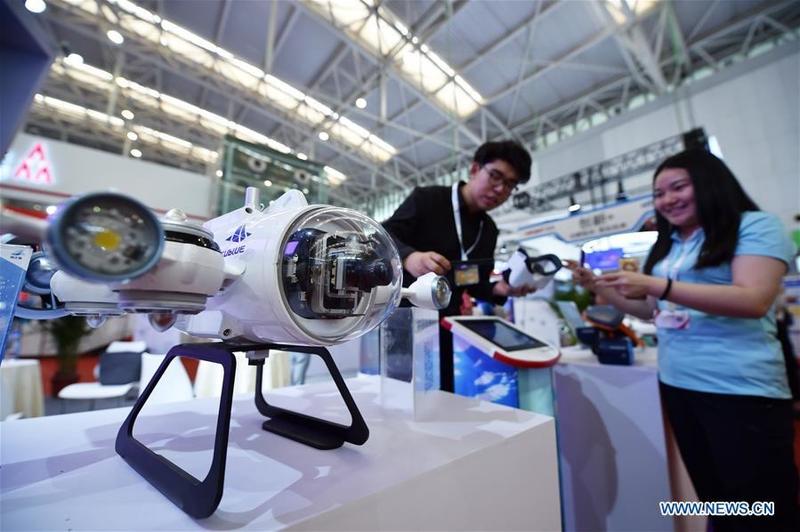 In this May 17, 2018 photo, people look at an underwater robot during an intelligence science and technology exhibition in north China's Tianjin. (PHOTO / XINHUA)

NEW YORK - China is the only mid-income economy on the list of the world's top 20 most innovative economies, according to the Global Innovation Index (GII) 2018 released on Tuesday.

The annual ranking also showed that China has the second largest number of Science and Technology Clusters and is making rapid progress on clean energy technologies.

China climbed to the 17th spot on the GII rankings from last year's 22nd spot, showing a steady upward trend over the years, according to the GII 2018.

China's economy is transforming from a labor intensive one towards one with high value addition, with innovation being a central element in this structural transformation driven by a top-down strategy

"The case of China fits into a trend. We've seen for several years now of China rising in the rankings," said Francis Gurry, Director General of the World Intellectual Property Organization (WIPO), at the launch of the document.

He noted that China is the only economy from the mid-income group to be ranked in the top 20.

Explaining the leap, he said China's economy is transforming from a labor intensive one towards one with high value addition, with innovation being a central element in this structural transformation driven by a top-down strategy.

While Switzerland continued to top the list for the 8th year, the United States fell from fourth place in 2017 to sixth, though in absolute terms, the country remained as the top contributor in key innovation inputs and outputs.

In addition, the United States came in second after China in the volume of researchers, patents and scientific and technical publications, noted Bruno Lanvin of INSEAD, a leading business school that co-published the GII.

The GII ranks 126 economies based on 80 indicators, ranging from intellectual property filing rates to mobile-application creation, education spending and scientific and technical publications.

The index is co-published by WIPO, Cornell University and INSEAD.

This year, also among the top 10 innovative economies are the Netherlands, Sweden, Britain, Singapore, Finland, Denmark, Germany and Ireland.

In 2017, the GII began to include a special section that reveals findings on Science and Technology Clusters in countries and regions.

This year's ranking found China taking the second spot in the number of such hotspots (16) after the United States (26), followed by Germany (8), Britain (4) and Canada (4).

Besides China, there are clusters from five mid-income countries of Brazil, India, Iran, Russia and Turkey in the top 100.

Commenting on the inclusion of this survey into the GII, Gurry said the S&T hotspots are "a measure of the strength of the innovation of a particular country," adding that their existence is a great encouragement for cross-fertilization among enterprises and research institutions.

Tokyo-Yokohama of Japan topped the overall innovation cluster ranking, followed by Shenzhen-Hong Kong of China, a repeat of last year

The WIPO chief also noticed China's shift from a quantitative to a quality pursuit in its intellectual property applications.

As a reflection of the change, a recent research of global leading brands showed Chinese brands are rising in value and becoming more household names throughout the world.

Gurry acknowledged a degrading increase in investment in clean energies and a peak around 2014 of patent applications in renewable energies and environmentally sustainable technologies.

However, the demands require the opposite. Projections indicate that by 2040, the world will require up to 30 percent more energy than it needs today and conventional approaches to expanding the energy supply are unsustainable in the face of climate change.

To meet that level, "we need innovation in energy production, in particular clean energy, storage, transmission and consumption habits," Gurry said. "We need to do so as environmentally friendly as possible."

China is making encouraging progress in clean energy technologies. According to WIPO records, China has become a major producer of intellectual property applications in this regard.

In the meantime, "a consciousness on the part of the leadership and increasing take-up on the part of the institutions of finding new ways to address the problem" are seen by the world, Gurry noted, giving examples of application of electric cars and public transportation systems in China.

Recognizing that the country is undertaking "a huge effort of transformation," the WIPO director general expects China to improve on ecological sustainability and to lead the way in clean energy technologies in the future.