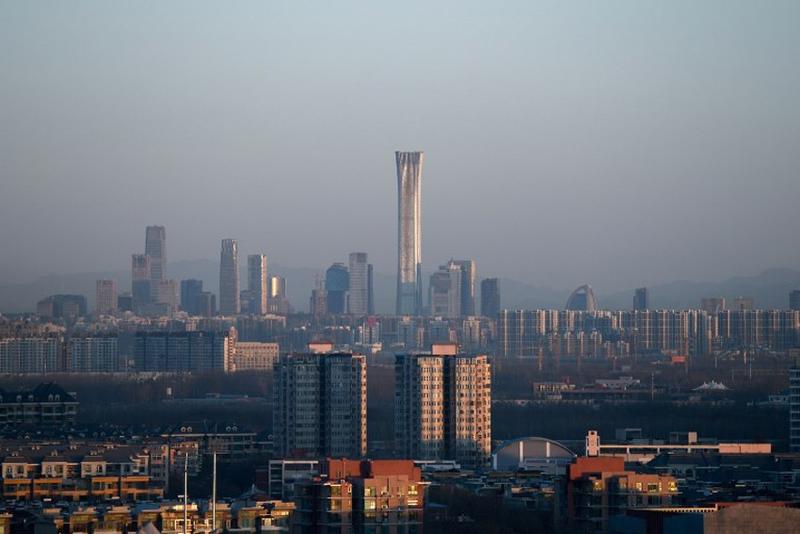 This Dec 17, 2018 general view shows the skyline of the central business district in Beijing, China. Data showed China has met its annual target for pollution control in 2018. (WANG ZHAO / AFP)

BEIJING – China has met its annual target for pollution control in 2018, with more blue skies, cleaner waters and greener mountains.

"We have successfully delivered all the obligatory targets set for 2018 and stayed in line with the timetable outlined by the 13th Five-Year Plan," Chinese Ecology and Environment Minister Li Ganjie said during a work meeting that concluded Saturday.

The density of PM2.5, a key indicator of air pollution, dropped by over 10 percent in 2018 from the previous year in three heavily-polluted areas, including the Beijing-Tianjin-Hebei region.

In terms of soil pollution control, Li said the country had reduced solid waste imports by 46.5 percent year on year, finished overhauls of all subpar garbage power plants and launch sweeping crackdown on the illegal transportation and dumping of hazardous waste in 2018.

Thorough action has been taken to clean up 1,009 "black and malodorous" water bodies in 36 major cities and 1,586 water sources, Li said, adding that "defense of lucid waters" would be a primary task for 2019.

China has pledged to coordinate its efforts on environmental protection and economic development in 2019.

At the annual Central Economic Work Conference held in December, authorities called for building on the achievements of 2018, making more effort in 2019.

One of the key challenges, analysts said, is finding ways to engage in pollution treatment without harming productivity.

Zhang Liqun, a researcher with the Development Research Center of the State Council, said the conference offered targeted prescriptions.

The conference made it clear that local governments must avoid the simple and unscrupulous practices of the past when dealing with environmental problems.

"This will give better support to balancing environmental protection with economic development and realizing mutually-enhancing interaction," Zhang said.

The country will also further reduce imports of solid waste and push for better air quality with better regional coordination and heavy-polluter revamps, according to the minister.