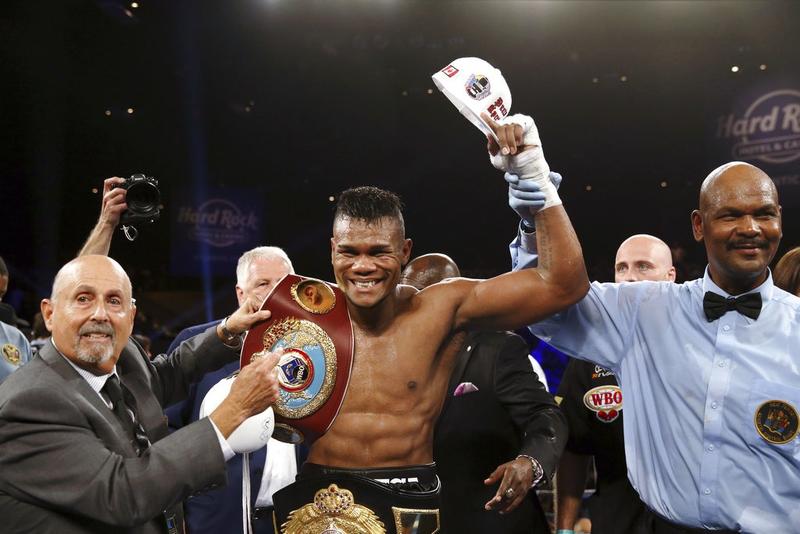 Eleider Alvarez, center, of Colombia, celebrates after he knocked out Sergey Kovalev, of Russia, in the seventh round of their boxing bout at 175 pounds, Aug 4, 2018, in Atlantic City, NJ (MEL EVANS / AP)

ATLANTIC CITY, NJ — Eleider Alvarez rocked Sergey Kovalev with a right that dropped the Russian on his rear.

He never let up in his first shot at the title.

After three years of waiting for a light heavyweight title fight, Alvarez left Kovalev crumpled on the canvas, enveloped by a victory celebration. He dropped Kovalev three times in a brutal seventh round and won the 175-pound championship by knockout at Hard Rock Hotel and Casino on Saturday night.

Alvarez ran his record to 24-0 (12 KOs) and sprinted around the ring as Kovalev stumbled back to his corner. Alvarez got the KO at 2:45 in the seventh as the sellout crowd of 5,642 at Etess Arena went wild for boxing's newest champion.

"I knew it was my chance and I wanted to take it right now," Alvarez said.

Alvarez won the WBO light heavyweight title and ended Kovalev's latest reign atop the division. Alvarez, who once had surgery on his right hand, found the power in that hand to level Kovalev with a right and send him to the canvas. Alvarez, a Colombian, pounced and pounded away at Kovalev when he beat the 10 count and knocked him down two more times before referee David Fields ended the fight.

"It was a two (punch) combo that I have been throwing my whole career and we worked on it in camp," Alvarez said. "I have always practiced that in camp and we thought it would work in this camp."

Dmitry Bivol unanimously outpointed Isaac Chilemba to retain the WBA version of the 175-pound title. There had been hopes to match Kovalev (32-3-1) against Bivol in a unification bout, perhaps later this year.

Alvarez caught Kovalev, who hasn't been the same since consecutive defeats to Andre Ward, and put those plans on ice. His third knockdown left Kovalev on all fours, and he sat motionless on the canvas as Alvarez took a victory leap into his corner. Kovalev was taken to a hospital. 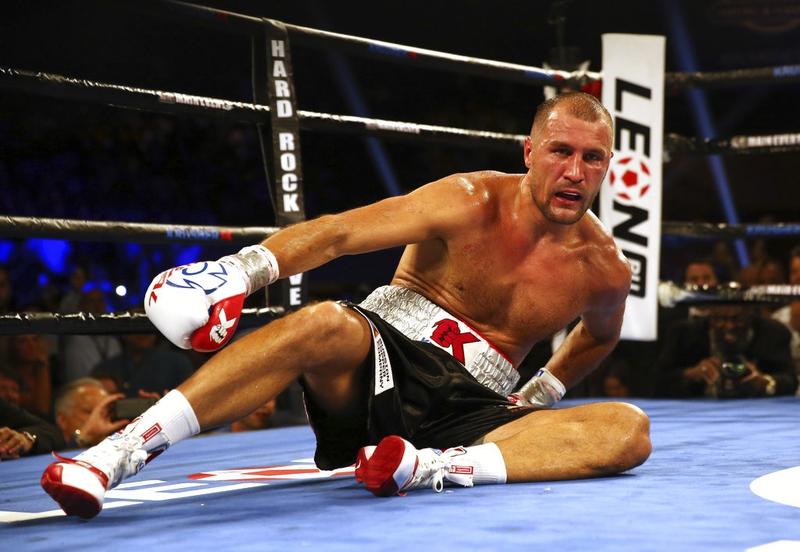 Sergey Kovalev, of Russia, is dazed as he sits in the ring after after a punch by Eleider Alvarez, of Colombia, during the seventh round of their boxing bout at 175 pounds, Aug 4, 2018, in Atlantic City, NJ. (MEL EVANS / AP)

Alvarez had used wins over Jean Pascal and Lucian Bute to earn a title shot he believed was years in the making.

"I wanted to show that I could stay strong and do good things," Alvarez said. "His punches were not as hard as they were in the beginning of the fight."

"Chilemba is a good fighter and he had champion spirit tonight," Bivol said.

Bivol, a Russian, worked the body and caught Chilemba in the sixth with a pair of quick jabs to the head. But he was never in a hurry to finish the fight and the restless crowd booed when the bout stagnated in the eighth round.

Chilemba, with former four-class champion Roy Jones Jr. in his corner, hung tight and kept the fight from completely getting away from him. He failed to throw the power punches in the later rounds he needed for a knockout to win the fight

Kovalev walked through the arena to a rousing ovation about two hours before the card was set to start on HBO, and Bivol already had his sights set on what would have been the biggest fight of his career.

"If the fans want that fight, it will happen," the 27-year-old Bivol said. "I just want to fight the best fighters."

Who knows who he'll get next?

The 35-year-old Kovalev could get a rematch — he was ahead on all three scorecards — but was dazed in the seventh and never mounted a comeback against the right and a left hook.

It was a thrilling ending to boxing's return to the boardwalk for the first time in four years. Kovalev also headlined that Nov. 8, 2014 card and beat Bernard Hopkins in a championship bout on the last major night of boxing in Atlantic City.

The sport was flattened as the casinos dried up — five shuttered over that span — before a recent rebirth that included the June opening of the Hard Rock. The legalization of sports betting in New Jersey should only help the city land better cards.

Kovalev had a bit of a following in New Jersey — he fought in three different AC venues in 2014 — and had rolled to a 30-0-1 record until his career as derailed by the losses to Ward.

"I lost my mind when I started to get famous," Ward said this week.

Now, he lost his title.

Kovalev was originally slated to fight Marcus Browne until legal issues with the challenger raised concerns about moving forward with the bout.

Eleider proved quite the super sub — and now, champion.